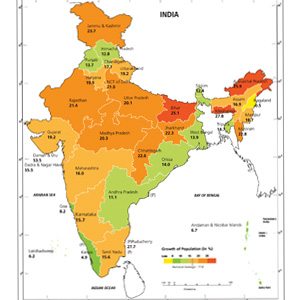 It isn’t just the U.S. that recently completed a decennial census. The results of India’s 2011 census are also in. First comes the good news. The percentage growth between 2001 and 2011 (17.64) was the lowest decadal increase since independence. Earlier, it was above 21 percent. But though the pace of growth has slowed considerably, the continuing increase means that India’s population—now over 1.21 billion—will be larger than China’s within a few decades. The Indian population rose by 181 million in 2001-2011.

And it grew by over four times in the last century. Uttar Pradesh (U.P.), at 200 million, has more people than Brazil, making it the most populous Indian state. The next four states in descending order: Maharashtra, Bihar, West Bengal and Andhra Pradesh. The combined population of two states (U.P. and Bihar) equals or exceeds that of the U.S.
The decline in fertility, which began in the south, has spread to some states in the west, north and east. However, the skewed sex ratio remains a disturbing trend. There are 940 females for every 1000 males. Although there’s been some improvement over the last two decades (after reaching a low point of 927 females), the ratio is still very unfavorable to females. Only China has a worse ratio than India—and in fact, that’s one of the few areas in which India seems to be doing better. While China’s female/male ratio fell from 944/1000 (in 2001) to 926/1000 (in 2011), India’s rose from 933/1000 to 940/1000 in the same period. On the other hand, if we go back to the turn of the twentieth century, India had 972 females for every 1000 males.