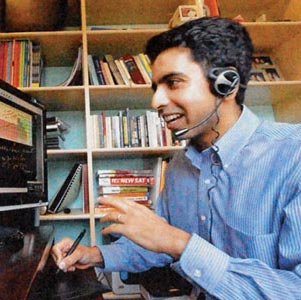 This Salman Khan has an academy, but it has nothing to do with the Indian film industry. He is based in this country. Though not an actor, he is involved in filmmaking, but the videos he makes are all about learning.

The core strength of the Khan Academy, a nonprofit organization, is an online video library of over 2200 mini lectures that can be viewed at no charge. And there are more than 100 free assessment modules to evaluate one’s progress.

It all started with algebra. Khan, the son of immigrants (his mother is from West Bengal, his father from Bangladesh), prepared a few instructional videos to help his cousins. But when he couldn’t teach them because of scheduling conflicts, he uploaded them on YouTube. It didn’t take long for the lectures to spread like wildfire on the Web.

The Khan Academy has, by now, delivered over 42 million lessons. The commercial aspect has been kept to a minimum, so the small team depends on donations and modest ad revenue. Khan seems eminently qualified for his role. He has three degrees from MIT, apart from an MBA from Harvard, and he had managed a hedge fund before finding his life’s calling. Shantanu Sinha, his business partner, has four degrees from MIT.

Last year, when Bill Gates raved about the academy and said that it had helped his kids, Khan’s profile shot up. Besides receiving funds from Gates, the academy is a Google Project 10^100 winner (the $2 million grant is meant for expansion, translating courses into other languages, and staff training). Khan focuses on pre-collegiate lessons, but he is keen to go beyond that and make the academy relevant to people from all walks of life.