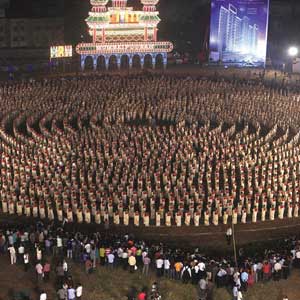 Lucknow’s City Montessori School had just five students when it opened in 1959. But for the 2010-11 academic year, notes the Guinness World Records, it enrolled 39,437 students, becoming the biggest school anywhere. And now, according to the school, it has over 45,000 pupils, along with 2500 teachers who teach in 1000 classrooms. Here’s another world record: India has the most number of elementary schools (664,000).

Jyoti Amge (2 ft 7 in) is the world’s shortest woman, as Khabar noted earlier. India also has the shortest film actor in an adult role, and the shortest stuntman. Ajay Kumar (2 ft 6 in) starred in Albhutha Dweep, while Kiran Shah (4 ft 1.7 in) was Elijah Wood’s double in the Lord of the Rings trilogy. In Ahmednagar, more than 2500 Brahma Kumaris created the world’s largest sand painting, which celebrates peace. The largest pencil drawing was by Ashok Nagpure of India. Meanwhile, R. Rajendran did a 30 ft by 20 ft painting of Mother Teresa with his mouth. In 2011, a record-setting 4,850,271 schoolchildren entered an art contest in India.

What about longest? Well, Head Priest Sarwan Singh’s beard can be combed out to 8 ft 2.5 in). The world’s longest railway platform is in Kharagpur, measuring 3517 ft. India also has the longest 2-ft-gauge passenger train tracks, running for 124.14 miles.

And strongest: Konda Sachdev pushed a Tata Winger van for a mile in 11 minutes and 39 seconds; Montystar Agarwal pulled a light aircraft for 328 ft in 29.84 seconds. Huge crowds: In 2005, more than 150,000 guests attended an Indian wedding. Yes, the wedding reception that followed also had a record attendance. Other large gatherings were at the Attukal Pongala festival (2.5 million women), Anandpur Sahib gurdwara (8 million Sikhs), and Kaikottikali performance in Mumbai (2639 dancers, as shown in the photo).