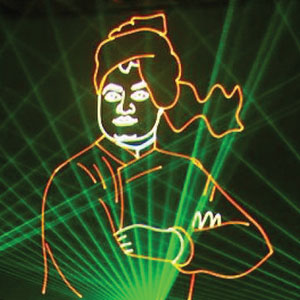 Laser shows are popular, but ever heard of a laser documentary? Manick Sorcar, son of the legendary magician P.C. Sorcar, has produced one titled Swamiji. It commemorates the life of Swami Vivekananda, who was born on January 12, 1863. While this year (and month) marks his 150th birth anniversary, last year marked his 110th death anniversary. That means Vivekananda was only 39 when he died—an astonishing fact, considering how much the monk accomplished in his short life. Calling him India’s most famous thinker in the 19th century, author Pankaj Mishra, in a recent book, also describes him as “the earliest and most famous of Indian spiritual leaders.”

So how did Sorcar make his laser documentary?

Producing sharp laser beams, he shaped and guided them on predetermined paths to create moving animated figures that tell the story of Vivekananda. There’s a blend of 2D and 3D animation in this one-hour documentary, which starts off with black-and-white images from a book celebrating Vivekananda’s famous appearance at Chicago’s Parliament of the World’s Religions in 1893. Sorcar’s documentary premiered at the Science City in Kolkata. Unlike his father, the U.S.-based Manick Sorcar is a high-tech magician who relies on cutting- edge science to enchant his audience. He is, in fact, an electrical engineer who specializes in architectural lighting design and energy conservation. His Colorado-based company is called Sorcar Engineering.