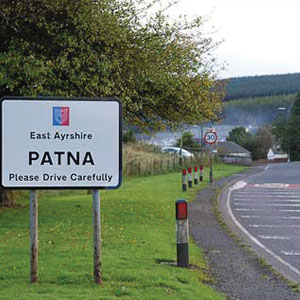 Chennai in India used to be called Madras, but you can still visit Madras—a small town in Coweta county—if you’re in Georgia. Then there’s a Delhi in Louisiana, a Delhi in New York, and even a New Delhi in Illinois! These are small towns, too—or in one case, an unincorporated community. However, they have no connection to India or the Indian cities whose names they share.

Not so with Patna in Scotland.

Located in bucolic East Ayrshire, Patna (with a population in the low thousands) has a connection to eastern India’s Patna, whose population is over 1.5 million. In the 18th century, William Fullarton was born in Patna, India, when his father was posted there as a colonial administrator. In 1802, for the coal miners he employed, Fullarton established a settlement on the family estate—and named it Patna. It’s about 375 miles from London. As Apoorva Krishna of the BBC (Hindi) reported from the Scottish Patna, where he spoke to the residents, there’s a lot of interest in the other Patna. Some schoolchildren, who are learning Indian dance moves, hope to visit the birthplace of their town’s founder