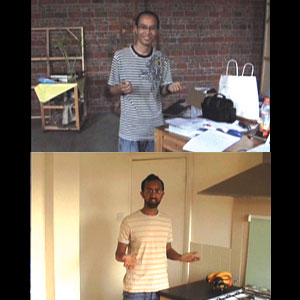 Connection, not conflict, is what artists Hetain Patel and Ren Qian have in mind on the 50th anniversary of the Indo-China border war. Patel’s recent video art project, featuring both himself and Qian, is titled “Being Chongqing.” It could have been called “Make Art Not War.”

Much has changed in both nations over the past five decades. Although tensions remain, and the rivalry seems more pronounced in some ways, there has also been much improvement in the relationship. India’s second-largest trading partner, after the U.S., is China. And then there are cultural exchanges, which have gone up in recent years. An example was the 2012 Beijing Biennale, where a special exhibition displayed 26 creations by 12 Indian artists, ranging from video works and sculptures to paintings and even an installation. There were 84 participating nations, though only two other nations, both non-Asian, had special exhibitions. And next year, Triennale India will showcase selections of contemporary Chinese art. This year also saw the largest display of Indian art in China. A traveling exhibition (“Indian Highway”) brought 130 works by 29 Indian artists to Beijing, where it opened in June at the Ullens Center for Contemporary Art.

As a resident artist in China, where he met Qian in 2009, Patel found inspiration in the city of Chongqing, presumably. “Both artists appear separately on a split screen in a video filmed at two different locations,” notes Claire Pennington in the International Herald Tribune. “Mr. Patel mimicked the gestures and speech of Mr. Ren [Qian] as each made hand motions and read the same words from a piece of paper.” The idea was to provoke thought and promote culture—and highlight the importance of bilateral relations.