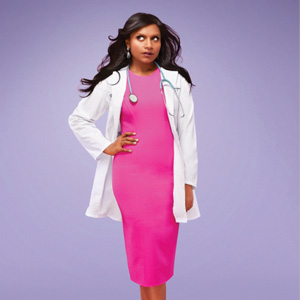 Ang Lee’s Life of Pi, whose lead character is an Indian boy who was chosen from 3,000 contenders, will open the New York Film Festival in the last week of September. Tickets will be scarce, no doubt—even if you make it to New York. But for another much-anticipated debut in the same week, you won’t have to go anywhere and the only ticket you’ll need is your TV remote. The Mindy Project, a sitcom featuring Mindy Kaling as the main character, will premiere on the Fox channel. It’s no surprise the sitcom was named after her: Kaling has over 1.8 million Twitter followers. She’s also a co-producer and one of the writers. Earlier, Kaling found success with The Office, an NBC sitcom.

It’s not hard to see how Vera Mindy Chokalingam, her birth name, became Mindy Kaling. A Dartmouth graduate, the talented Kaling has written a book titled Is Everyone Hanging Out Without Me? (And Other Concerns). Reflecting on her early years as a chubby kid, she notes, “Some of the first math I understood was that I was closer to twice Ashley’s weight than to her weight.” In the new sitcom, Mindy Lahiri is—what else?—an unmarried physician and the daughter of Indian immigrants. While she’s successful as an ob-gyn, her personal life has ups and downs, not to mention twists. Kaling’s own life provides some material, but did it also motivate her to do the show? Perhaps. And as she quips, The Mindy Project gives her a chance to get romantically involved (Kaling used different words) on the set with good-looking actors who are interested in Mindy Lahiri!