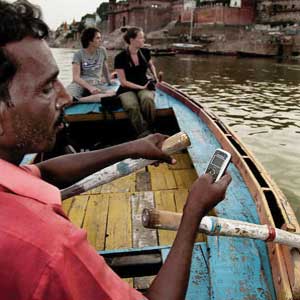 This year marks the 40th anniversary of mobile phones and the 20th anniversary of the World Wide Web—two huge technological advances that have transformed our lives. There’s also a 30th anniversary worth mentioning. It was in 1983 that Motorola’s $4000 “Brick” became the first commercially available cell phone.

India still has low internet penetration, but it’s different when it comes to cell phone usage. And across the world, notes the International Telecommunication Union, the number of mobile phone subscriptions—6.8 billion—is approaching world population figures. So, how many mobile phone subscriptions does India have? Close to 870 million, according to the Telecom Regulatory Authority of India (TRAI), which means only China has more cell phone users in the world. In 2002, to put things in perspective, India had a total of 45 million phone subscribers (landline plus mobile). The impact of India’s mobile revolution since then has been profound, with cell phone users accounting for 96 percent of the subscribers added during a decade of rapid growth. “Even if we discount this figure by 30 percent to eliminate duplication and non-active numbers, 600 million subscribers meant a phone for every two Indians, from infants to the aged,” write Assa Doron and Robin Jeffrey in The Great Indian Phone Book.

The benefits have percolated to all layers of society. Take water, which is so precious in India. Farmers can use it more wisely, thanks to mobile phones—but so can urban residents. For instance, a startup called NextDrop connects valvemen, who measure water levels in reservoirs, with engineers, who decide where the water should be released. Most important, consumers get timely phone texts from NextDrop so that they don’t miss out on their valuable share of water.