Now Playing Near You 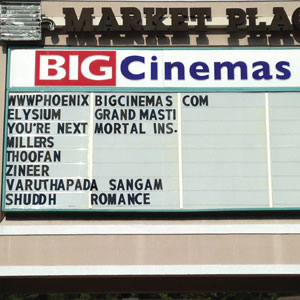 To commemorate Indian cinema’s 100th anniversary this year, here’s some interesting news for local film lovers. “Atlanta has become one of the fastest-growing markets for Bollywood films,” says Gitesh Pandya, founder of Box Office Guru. “In fact, on opening weekend for Chennai Express, the two Atlanta theaters ranked number 12 and number 14 out of the nearly 200 theaters across the U.S. and Canada.” Atlanta did better than metros like Toronto, Boston, Philadelphia, and Los Angeles. Only five years ago, as Pandya notes, a new Shah Rukh Khan film opened in 83 theaters across North America. Now, for major Bollywood films with a marquee name like Khan, opening in over 160 theaters is not uncommon. Given America’s widely dispersed South Asian population, the boom is not confined to first-tier markets. Even in second- and third-tier markets, multiplexes like AMC and Regal have turned to Indian films to boost their revenue.

Meanwhile, for Indian filmmakers shooting abroad, the flush times seem to be over—at least until the rupee bounces back. Instead of heading to Europe and Australia for expensive shoots, they are going to Kashmir and Kerala. And for more exotic spots, there are always places closer to home—like Hong Kong and Bangkok. In the last four months, according to the Associated Chamber of Commerce and Industry of India (ASSOCHAM), the location shooting outside India dropped by 30 to 35 percent when compared to the previous four months. With India’s general election scheduled for next year, the economic uncertainty is expected to continue for now.

Which means, for Bollywood fans, Switzerland is out but Sri Lanka and Southeast Asia are in.