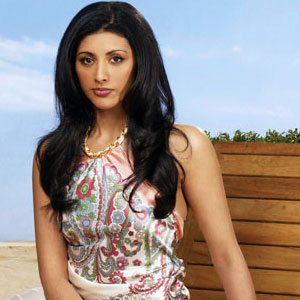 Meet Reshma Shetty. She is yet another Indian-American whose immigrant parents are physicians. But Shetty, like a growing number of her second-generation peers, chose to strike out in a field that’s far from the stable world of conventional professions. Despite her parents’ misgivings, she dropped medicine and opted for music. Trained as a singer, she has master’s degrees in Western classical music from the University of Kentucky and the Cincinnati Conservatory of Music. After getting a break in Bombay Dreams, where she had a lead role, Shetty landed other acting and advertising gigs. She now appears as a physician’s assistant in Royal Pains, a comedy-drama (or dramedy) on USA Network.

So while NBC’s Outsourced was canceled and there is no further word on Fox’s much-anticipated (much-hyped?) Nevermind Nirvana, Indian-American actors have by no means gone kaput on comedy-accented television shows.

Just ask Danny Pudi (Community), Aziz Ansari (Parks and Recreation), Mindy Kaling (The Office), and Maulik Pancholy (30 Rock). Interestingly, all these NBC shows appear in that order, one after the other, at primetime on Thursdays. Then there is Kunal Nayyar of The Big Bang Theory, which also airs on Thursdays, albeit on CBS.


These actors, it’s safe to say, would make a good cast for an Indian-themed show to replace Outsourced.