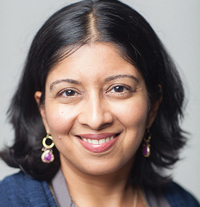 1. Shalini Shankar, an anthropologist who focuses on the South Asian diaspora, is a 2017 Guggenheim Fellow. Other Fellows include Sandeep Mukherjee, who teaches art, and Pramila Vasudevan, a resident artist. Approximately how many fellowships are awarded every year?
(A) 10 (B) 400 (C) 175 (D) 25

3. Comedian Hasan Minhaj was the featured performer at the White House Correspondents’ Association dinner this year. It was a rare honor for an Indian American, though President Trump was a no-show. On which program does Minhaj appear as a senior correspondent?
(A) The Tonight Show (B) The Daily Show (C) World News Tonight (D) Saturday Night Live

5. A waxed version of Shreya Ghosal will be among 50 celebrities at India’s first Madame Tussauds. These figures are drawn from history, entertainment, sports, etc. Ghosal, who made her debut in 2002, will be the first Indian singer at this wax museum, which is opening where?
(A) Mumbai (B) Bengaluru (C) Kolkata (D) Delhi

7. Physician Raj Panjabi is also a social entrepreneur who founded Last Mile Health. Recently listed by Fortune as one of the “World’s 50 Greatest Leaders,” he’s a 2017 Skoll Awardee. Now based in the U.S., Panjabi grew up in which war-torn African nation bordering Ivory Coast?
(A) Guinea (B) Liberia (C) Burkina Faso (D) Ghana

8. Actress Freida Pinto, known as an activist for social and feminist causes, won raves for her lead performance as a fellow activist in a TV show called Guerrilla. Focusing on the racial strife and civil rights struggles of the 1970s, this six-part series on Showtime is set in which city?
(A) London (B) Johannesburg (C) New York (D) Toronto

9. Atlantan Asha Gomez, co-author of My Two Souths: Blending the Flavors of India into a Southern Kitchen, got a 2017 James Beard nomination. Chef Vishwesh Bhatt and sommelier Rajat Parr were also nominees. How many James Beard Awards has Madhur Jaffrey won for her cookbooks?
(A) One (B) Three (C) Seven (D) Two

10. Anish Kapoor, winner of the 2017 Genesis Prize, has said that he’d use the $1 million prize money to help Syrian refugees. One of his famous sculptures, the 110-ton Cloud Gate, is made out of stainless steel. Dubbed "the Bean," it’s been in Millennium Park since 2006 in which city?
(A) Boston (B) Atlanta (C) Chicago (D) Houston 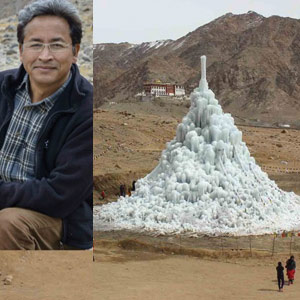 His name is Sonam Wangchuk. If it rings a bell and, for some reason, he reminds you of the film star Aamir Khan, you’re not mistaken. Wangchuk was indeed the inspiration for the lead character in 3 Idiots, the 2009 film that broke box office records. Those who have seen it will recall that Khan—one of the three ‘idiots’—heads off to Ladakh in the high Himalayas, where he becomes a beloved and influential figure. The same could be said about Wangchuk, a native of Ladakh. An engineer and reformist, Wangchuk builds ice stupas, for which he won a 2016 Rolex Award that’s worth almost $100,000. Though the stupas are majestic, he’s not making an artistic statement with his sculptures. It was climate change that prompted Wangchuk to take action. But how do these ice stupas help alleviate the water crisis afflicting the region? Drawing inspiration from the work of another Ladakhi engineer, Wangchuk realized that stupa-shaped glaciers, with their low surface area, would melt at a slower rate than flat ice, preserving the water for irrigation over longer periods of time.

With the prize money, he’s now going to build about 20 more stupas—each rising to 100 feet—and plant trees in the area surrounding his school. Called SECMOL (the Students’ Educational and Cultural Movement of Ladakh), it’s located near Leh, Ladakh’s capital, and is well known as an alternative school that helps failing students by teaching them to use their minds and hands innovatively. The students have, among other things, built solar-paneled mud houses suitable for the local environment. Wangchuk raised Ladakh’s profile, while the film he partly inspired turned it into a popular tourist destination. 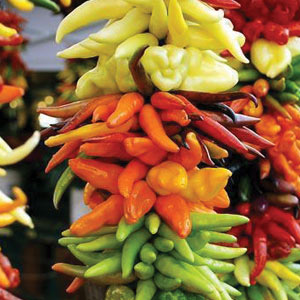 Rejoice, pepper lovers! You can celebrate even if the chili peppers on your plate make you weep. As you may have heard, peppers are good for your health— which means you don’t have to feel guilty about raising the spice level. However, that still doesn’t put the Carolina Reaper, the world’s hottest chili pepper, out of the danger zone. Its spiciness averages at 1.5 million SHU (Scoville Heat Units) and reaches as high as 2.2 million. That could be like eating molten lava, as somebody said, although the Trinidad Moruga—ranked number 2— seems no better. Remember India’s Bhut Jolokia (Ghost Pepper)? It grabbed attention a decade ago when it became the first pepper to score over 1 million SHU. Now, for adventurous eaters, the Bhut Jolokia seems within reach—it’s the 7th hottest pepper—or perhaps they could try the Naga Viper, ranked number 6. Incidentally, while the famous Carolina Reaper originated in South Carolina, it does have a subcontinental link. Its demonic scorpion’s tail is the result of a cross between the Pakistani Naga and the Red Habanero.

Coming back to the health benefits, a University of Vermont study released this year showed that eating chili peppers led to a reduction in mortality caused by strokes and heart attacks. The drop was as much as 13 percent. The finding of this substantive analysis confirmed a similar study done in China a couple of years ago. Capsaicin is the magical ingredient that makes the difference. India, which exports peppers, is the world’s largest producer and consumer. If one had to pick a chili pepper capital, it would be Guntur in southern India.

FAMOUS FOR BEING POPULAR 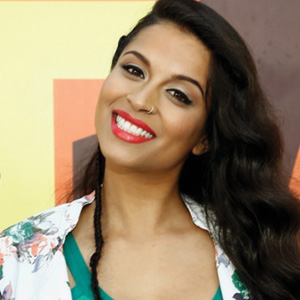 In the social-media-saturated world of freelance gigs and do-it-yourself entrepreneurship, the best kind of promotion is self-promotion—if it’s done well. Lilly Singh (left) does it exceedingly well, making her a You Tube superstar. In fact, the Indo-Canadian’s user name is Superwoman, which is apt when you realize that Forbes ranked her third in last year’s list of the “world’s highest-paid You Tube stars.” This 2017 People’s Choice Awardee, who is not even 30, raked in $7.5 million in 2016—and over the six plus years she’s had her channel, she gained 10 million subscribers. Singh is a vlogger, a performer, but so are countless others who have little, or maybe moderate, success. What sets her apart? She’s a bawse—her recent book, How to be a Bawse: A Guide to Conquering Life, is a hit—which can be described as “a person who exudes confidence, hustles relentlessly, and smiles genuinely.” Her 50 tips for success are no guarantee, of course, because there’s also that unknowable chemistry between performers and their followers. She’s a rapper and comedian, not to mention a motivational speaker, who stumbled into this line of work as she was trying to work through some issues.

We could also say that about Rupi Kaur (right), another Indo-Canadian of Punjabi heritage, who used personal trauma as a launching pad to pen lyrical poems that became a sensation on social media. After her self-published collection, Milk and Honey, was picked up by a mainstream publisher, it became a best-seller in Canada and the U.S., selling about a million copies to date.

Tiger, tiger, burning bright—but so does a lioness (or Kaur)! 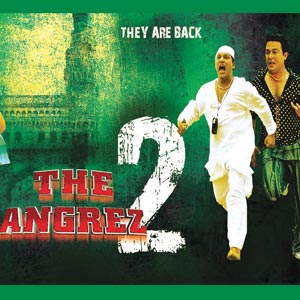 Country music fans know where to go when they crave a theme park experience. But Dolly Parton’s Dollywood in the Smokies of Tennessee is not the only Dollywood around. You can turn to Indian cinema and, more intriguingly, the Netherlands for other Dollywood experiences. While Tollywood, Kollywood, Mollywood, even Sandalwood—all focusing on South Indian cinema—have been around for a long time, Dollywood is much newer. Its Hyderabad-centric Deccani or Dakhini films are usually in Urdu or Hindi (as spoken there) and they draw on the distinctive Nawabi flavor and humor of the region. The Angrez from 2005 (the sequel was released a decade later) was seen as a breakthrough. Other examples include Hyderabad Nawabs, Paisa Potti Problem, and Tiger Sultan. Although Dollywood, with its focus on local stories and characters, may seem geared for niche audiences, there’s growing enthusiasm for the films.

And then there’s the Dutch Dollywood. The Hague, a coastal city in the Netherlands, is home to a large population—about 10 percent of the total by some estimates—of Surinami Indians (aka Surinami Hindustani), whose ancestors had worked as indentured laborers in Surinam, a former Dutch colony. Dollywood is a fusion of Den Haag (The Hague) and Bollywood. For the 160,000 Surinami Indians living in the Netherlands, and the local population, the area encompassing Transvaal and Schilderswijk is seen as Little India— or Dollywood. In the Netherlands, that’s where you’d mostly likely want to head for a fix of Indian culture, cuisine, and…cinema.