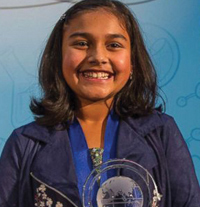 2. This digital currency baffles many people, but Balaji Srinivasan hopes to change that. He’s a cofounder of 21.co, which built the technology for micropayments based on it. He has two M.S. degrees and a Ph.D. from Stanford, where he teaches courses. What’s the digital currency called?
(A) Realcoin (B) Goldcoin (C) Silvercoin (D) Bitcoin

3. Colin Gonsalves, an Indian human rights lawyer, shares the 2017 Right Livelihood Award with three others. Gonsalves was cited for his novel use of public interest litigation to fight for the rights of marginalized communities. This ‘Alternative Nobel Prize’ is presented where?
(A) London (B) Stockholm (C) New York (D) Paris

4. Asha Rangappa, a senior lecturer at Yale University’s Jackson Institute of Global Affairs, was an FBI special agent. She joined the New York division not long after 9/11and worked for the FBI till 2005. Now she’s also a legal and national security analyst, appearing on which channel?
(A) CNN (B) NBC (C) CBS (D) FOX

5. Starting out as a lawyer, Jagmeet Singh became an MPP (Member of Provincial Parliament) in Canada. And now, in a breakthrough, this observant Sikh has become the leader of the New Democratic Party, Canada’s third biggest party. Which province is he based in as the MPP?
(A) Québec (B) Alberta (C) Ontario (D) Manitoba

6. Preet Bharara has been busy since Trump fired him as U.S. Attorney for the Southern District of New York. Among other things, he does a podcast called Stay Tuned with Preet. Given his media skills, it’s no surprise that he’s a senior legal analyst. On which channel does he appear?
(A) FOX (B) CNBC (C) ABC (D) CNN

7. The first part of Star Trek: Discovery ends this month, but it will return for the second part in January. The cast includes, as Trekkies already know, Rekha Sharma (as Commander Landry) and Maulik Pancholy (as Chief Medical Officer Nambue). When did this series first air on TV?
(A) ’60s (B) ’70s (C) ’80s (D) ’90s

8. Kunal Nayyar, with $25 million earned from one show, is ranked number 4 on the “highest-paid TV actors 2017” list put out by Forbes. Jim Parsons, the highest-paid TV actor on the same list, also appears in this popular sitcom, now in its eleventh season. What’s it called?
(A) Fresh Off the Boat (B) Modern Family (C) The Big Bang Theory (D) Silicon Valley

9. Sunil Amrith, a Harvard University historian who studies how migration influences the social and cultural dynamics of nations in South and Southeast Asia, is one of the 24 MacArthur Fellows in 2017. How many other South Asian Americans won this ‘genius’ award this year?
(A) None (B) One (C) Two (D) Three

10. Veeraswamy, most likely the world’s oldest Indian restaurant, turned 90 last year. It was a Westerner with an Indian connection—not anybody named Veeraswamy—who opened this iconic restaurant in 1926. The ownership has changed over the decades. Where is it located?
(A) New York (B) London (C) Paris (D) Lisbon 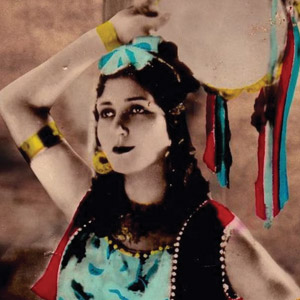 THE GURU AND THE CEO 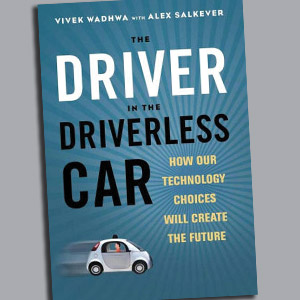 Well-known tech guru Vivek Wadhwa has long been gung-ho on the benefits of technology. His latest book, co-written with Alex Salkever, is titled The Driver in the Driverless Car (Berrett-Koehler). But Wadhwa, troubled by current trends, recently wrote to his followers, “We felt that technology was reducing our ability to choose and that the forces arrayed against the user to alter their behavior—the smartest Ph.Ds., the latest AI algorithms, the ability to personalize offerings down to the zip code and even the household—was an unfair arrangement.” So the authors are taking a closer, more balanced look in their next book, to be called Your Happiness Was Hacked. To repeat a well-worn saying, if we don’t master technology, we’ll be enslaved by it. 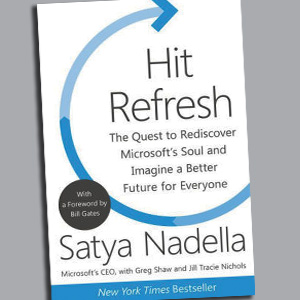 In his own way, Satya Nadella, the CEO of Microsoft, makes the same point in Hit Refresh (HarperCollins), showing how leadership can play a huge role in making sure that technological advances are responsible and for the benefit of all. “Nadella concludes by introducing an equation to restore digital trust, ethical design principles, and economic growth for everyone,” notes the Financial Times, which includes this book and The Driver in the Driverless Car in its longlist of Best Business Books in 2017. In his book, Wadhwa picks a Google self-driving car as his starting point and examines risks vs. rewards, equity, and autonomy vs. dependence. In Hit Refresh, Nadella, who has a disabled son, stresses the importance of empathy and reveals how his family, not to mention Bill and Melinda Gates, had a profound influence on his worldview. A longtime cricket fan, Nadella’s passion for the game is such that, as a youth in India, he wanted to be a professional player. Clearly, cricket’s loss was technology’s gain.

CRAZY ABOUT FILMS AND FOOD 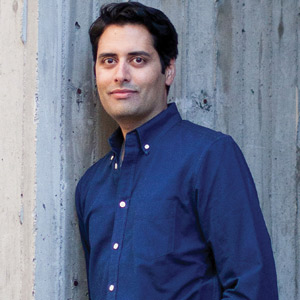 To share his twin interests, Sri Rao hit upon the neat idea of combining them in a book called Bollywood Kitchen (Houghton Mifflin Harcourt). It’s an appreciation of Indian culture as experienced by Rao, a screenwriter and filmmaker who grew up in the 1960s and ’70s in small-town America, where his parents were some of the earliest immigrants from India. “Were it not for the elaborate dinners my mom served every evening precisely at 6:00, I would know nothing about the complex flavors that fed generations of my ancestors,” he writes. “And were it not for the invention of the VCR, which brought with it a nightly ritual of watching Bollywood movies after dinner, I would be a stranger to the stories, language, and music of my parents’ home.”

One evening’s menu, to give an example from the book, features recipes for Sri’s signature chicken, cucumber raita, string beans with peanuts, and chocolate chai affogato. It’s paired with the Sri Devi film English Vinglish, set mostly in the U.S. His film review appears under ‘The Dish,’ and if you’re in the mood for more, he offers (under ‘Taste This’) these immigrant dramas: The Namesake, Swades, and My Name is Khan. You’ll find the cast under ‘Ingredients.’ Some may find this too cute, but if you’re game, Rao will take you on an enjoyable tour of similar pairings. He treasures home cooking, family recipes refined over time, and improvised dishes made with whatever ingredients are available. Restaurant food is not for him. Even if his decision to leave out regional cinema and stick to the ’90s and after is understandable, one wishes he had picked more indie films. That would have made his book even more delectable. 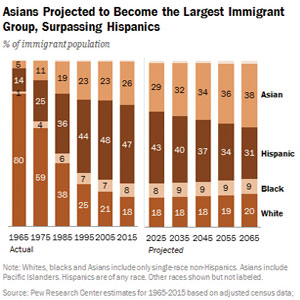 In the first 15 years of this century, according to a recent Pew Research Center report, the Asian population grew the fastest in the U.S. among all major racial and ethnic groups. It rose by 72 percent, going from 11.9 million at the turn of the century to 20.4 million in 2015. Two years later, it’s larger. How did Indian-Americans fare? While neither the fastest nor the slowest growing segment, their population increased at a steady clip, changing from 1.9 million in 2000 to over 3.9 million in 2015. Now around 4 million, Indian-Americans form the second largest Asian group (after the Chinese). While immigrants in certain subgroups are doing well, others—notably, recent refugees—remain on the lower rungs in socioeconomic terms.