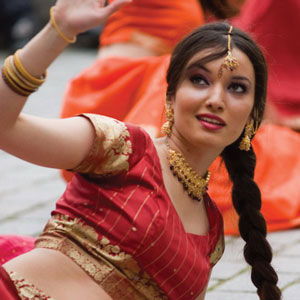 Irit Namatinia is an Israeli woman who teaches Bollywood dances in China. What a striking example of India’s global reach!

Namatinia got interested in Hindi films when she moved to India with her husband about four years ago. She took dance classes, but her enthusiasm was such that it didn’t stop there. After moving to China, she began a new career—as a Bollywood dance teacher. Her lessons for the locals and expatriates generated interest, even leading to the formation of a Bollywood dance troupe. And so far, they have given five performances to decent-size audiences in China.


Namatinia has an explanation for the wide appeal of these dances. “You’ve got elements of hip-hop, salsa, belly dancing—a real vibrant combination of tradition and modernity,” she told Beijing-based Global Times . She makes frequent trips to Delhi, where she manages another group of dancers who are mostly foreign residents.

But the draw isn’t merely Bollywood dances and music. The films, too, have made an impression in China. Though Chandni Chowk to China —a Hindi movie set in China—went nowhere, the Chinese government is betting that it can strike gold. Maybe that’s why its film company approved $10 million for Gold Struck , which will be shot in China using three languages (Mandarin, Hindi and English). The story centers on two students—an Indian and a Chinese—whose research takes them on a trip through time to the Qin Dynasty. Where do these students meet? At an American university, of course.

For those who think Hindi films didn’t make it to China in earlier decades, here’s a factoid: Li Zhi was a well-known Indian filmmaker. Who? That was what the Chinese called Raj Kapoor, whose Awara was screened widely in the Maoist era. Other examples include Caravan and Do Bigha Zameen , along with Lagaan and Devdas in recent years.