SEPOYS OF THE GREAT WAR 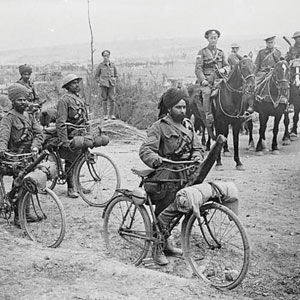 A century ago, when a horrific war broke out in the summer of 1914, it ended an era and marked the beginning of a modern age that seemed much darker for a while. This was the First World War, of course, then known as the Great War, which lasted four years and exacted a heavy toll. The British Indian Army recruited about 1.5 million soldiers, mostly from the farming communities of northern India, and deployed them in Europe and parts of the Middle East, with perhaps a million serving as combatants. Apart from the war’s brutality, the unfamiliar climate and culture posed challenges for the Sikh, Muslim, and Hindu sepoys. But they often fought bravely in the trenches and towns, winning a few thousand medals, including eleven Victoria Crosses. Khudadad Khan was the first Indian recipient of this highest award for military valor.

No other British colony sent more soldiers to the frontlines than India. The casualties were steep—close to 65,000 Indians died before armistice, going by one estimate—and there was fierce fighting in places like Gallipoli, Ypres, and Loos. In Neuve Chapelle, over 5000 Indian sepoys were killed in just three days of action.

“Cannons, machine guns, rifles and bombs are going day and night, just like the rains [in India],” said Havildar Abdul Rahman in a letter dictated to his family. “Those who have escaped so far are like a few grains uncooked in a pot…”

This wasn’t a war, noted another sepoy in his letter, it was the ending of the world.