Sounds of Bollywood in Uzbekistan 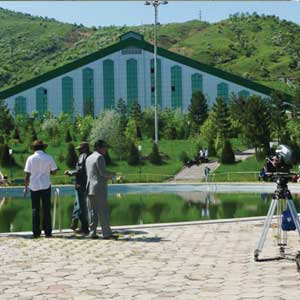 Samarkhand, Bukhara, Tashkent...all are evocative names, reminding one of Central Asia’s rich past. But Uzbekistan, the nation that’s home to these historic cities, is only two decades old, formed after the Soviet Union’s collapse. Some will be surprised to learn that Uzbekistan received over 15,000 Indian visitors last year. This spurt in tourism, accompanied by closer economic and cultural ties, happened in just a few years. Indian filmmakers have also flocked to that region, with the picturesque Chimgan ski resort in the Chatkal Range being a favorite. In Agent Vinod, a Hindi film starring Saif Ali Khan, the murder of an ex-KGB officer in Uzbekistan draws the attention of our eponymous hero.

Bollywood, though, made an impact in Central Asia even before it was known as Bollywood. Raj Kapoor was a well-known name, and his early films like Awaara and late films like Mera Naam Joker were well received during the Cold War period, when India had close diplomatic ties with the Soviet Union.

Other favored stars include Amitabh Bachchan, Shah Rukh Khan, Aishwarya Rai, Aamir Khan and Preity Zinta. Every week, reportedly, about three Indian films are shown on Uzbeki television. Another Indian actor who drew a lot of attention in his heyday was Mithun Chakraborty, whose films Disco Dancer and Ali-Baba and the Forty Thieves were big hits. The latter, an Indo-Uzbeki production, is still fondly remembered there.