STARS OF THE BADMINTON COURT 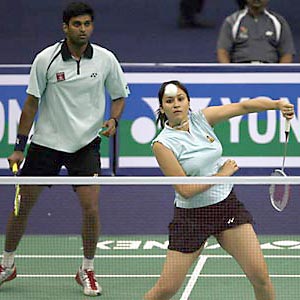 In India, badminton is big—okay, not as big as cricket. Still, badminton is keenly followed throughout the country, and players like Saina Nehwal—ranked fifth in the world—are household names. Here’s a clue to its popularity: badminton originated in colonial India about 250 years ago. Another clue: Padukone. Not the Bollywood actress Deepika, of course, but her father Prakash, who became legendary in India for his prowess as a badminton player, paving the way for the rise of a younger generation.

Another veteran worth mentioning is Pullela Gopichand (Nehwal’s coach), who won the All England Championship, just as Padukone had done years earlier. Padukone also received, among other awards, a World Cup title and a gold medal at the Commonwealth Games. With their mastery on the court, Padukone and Gopichand inspired younger Indian players. But their influence didn’t stop there. As coaches, they’ve had a role in improving the quality of Indian players and the infrastructure in India.

In contrast to the earlier period, female badminton players are drawing a lot of attention these days. Apart from Nehwal, one could mention Jwala Gutta, Aparna Popat, Shruti Kurien-Kanetkar and Ashwini Ponnappa. Gutta, who was until recently married to Chetan Anand (another badminton player), is of Chinese and Indian parentage. Gutta won the National Badminton Championship 13 times, and at the 2010 Commonwealth Games in Delhi, she and Ponnappa shared a gold medal in women’s doubles.