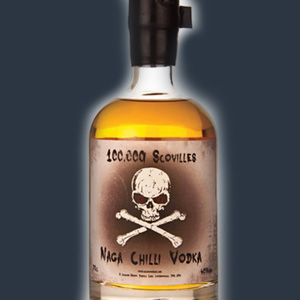 But here’s a reason to cheer: the Naga Chilli Vodka, scoring one million on the Scoville heat scale, is the world’s hottest chilli vodka. Launched just this year by U.K.-based Master of Malt, it’s said to be twice as hot as Tabasco. It sells for about $50 at the Selfridges department store, where mixologists have reportedly come up with a new Bloody Mary recipe using this vodka. The Daily Mail, which provided the recipe, dubs it “Bloody Scary Cocktail.” The warning label reads: “By purchasing this bottle you agree that you fully understand that this product contains extreme heat and should be handled responsibly.”

In other words, “Watch out!” And in the wrong hands, it could even turn into a weapon.

That’s not all when it comes to bragging rights. The world’s “spiciest cocktail” also has an Indian connection. Called Illiana, it was created by mixologist Dan Thomson for Zenna, said to be London’s first Indian cocktail bar. It’s made with Chairman’s Reserve Spiced rum, orange curacao and a secret chilli sauce, along with other ingredients and Bombay Sapphire gin.

If you plan to sample this potent cocktail at the West End bar on your next trip to London, be prepared. You’ll be asked to sign a waiver before it’s served.