Top Awards for Scientist and Activist 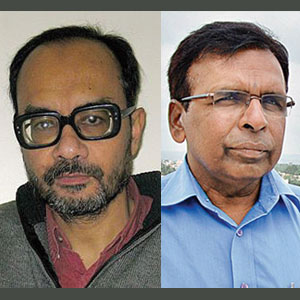 Although physicist Ashoke Sen studied and worked in the States, some will be surprised to learn that he did his groundbreaking research in India, where he has lived since the late ’80s. Sen is one of the nine recipients of the newly instituted Fundamental Physics Prize, now the world’s richest science award. The inaugural winners received $3 million each, and the only stipulation for them is to join the selection committee that picks future awardees. The prize was established by Yuri Milner, a maverick Russian-born billionaire who dropped out of a Ph.D. program but went on to make his fortune using an investment strategy he devised. With this prize, he hopes to get young people excited about science.

Sen works at the Harish-Chandra Research Institute in Allahabad. Also a Padma Shri awardee, he focuses on string theory and is especially known for his research in S-duality, tachyon condensation, and black hole entropy. Sen has found “striking evidence of strong-weak duality in certain supersymmetric theories,” in other words. His earlier stints were at Stanford, Fermilab, and the Tata Institute of Fundamental Research.

Activist Kulandei Francis is the sole Indian among the six winners of this year’s Ramon Magsaysay Award. Thousands of rural Indians benefitted economically through his Integrated Village Development Programme (IVDP), which he set up in southern India over two decades ago. From its modest beginnings as a night school and first aid facility, IVDP has grown to embrace more than 8,200 self-help groups, with 154,000 members. A signal IVPD achievement is a micro-watershed project, which resulted in 331 small check dams that help farmers.