TWO REIMAGININGS OF THE MAHABHARATA 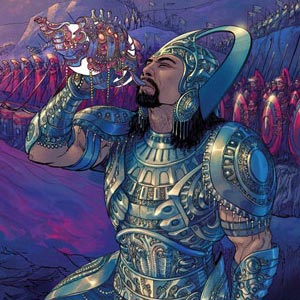 Toying with India’s epics is not for the timid. Enter Sandeep Sood, a comic book artist who is hardly cowardly.

Sood relishes satire and doesn’t shy away from controversy—as anybody who follows the popular Badmash comic strip would point out. Along with Sanjay Shah and Nimesh Patel, Sood celebrate naughtiness. Their animated clips on the Web include The Singhsons, which is a spoof of, as you guessed, a never-ending hit show on Fox TV. Tickling the funny bone may be Badmash’s goal, but the creators are not above cultivating a ‘bad boy’ image. Peeved by the high visibility of Outsourced, an Indian-themed sitcom on NBC, they came out with their own animation series. It’s called Doubtsourcing.

“If you’re gonna steal jokes, hire a few dozen writers, and spend millions of dollars, your show should at least be funnier than our two-bit indie production?,” they note. “At least take those jokes and do something cool with ’em.”

So what does this have to do with The Mahabharata?

Not much, except that Sood—inspired by the Amar Chitra Katha comic books he read as a youngster—went on to create a hip new strip dubbed ACK! What would happen, he wondered, if the Pandavas and Kauravas of the epic wandered into present-day New Jersey. Sood envisioned his project as a fusion of two childhood passions: Indian comic books and American cartoon shows.

Sample ACK! dialogue (at a tavern, probably near the Garden State Parkway):
Woman: “So, what are you up to these days?”
Man: “Life in Jersey is tough for an ancient character from The Mahabharata. We do weddings and Diwali plays?.”

It’s not for everyone, admittedly, but some readers will enjoy the fun and adventures.

The same could be said about Grant Morrison’s 18 Days. This reimagining of the Indian epic, in the form of a graphic book from Dynamite Entertainment and Liquid Comics, unfolds like the great climactic struggle on the battlefield of Kurukshetra. The illustrations are by Mukesh Singh.