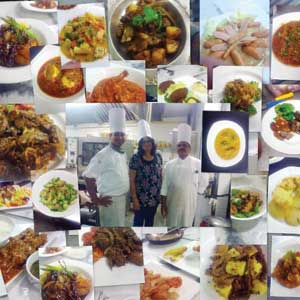 You’ll find them in pockets of India, where Anglo-Indian cuisine retains a hold long after the passing of the British Raj. Indian-Chinese food may be more popular, but before Gobi Manchurian there was Vindaloo. Although vindaloo is a staple at Indian restaurants everywhere, the more obscure Anglo-Indian dishes are found only in certain places. Kolkata and Delhi are examples, as is Bangalore—and yes, there are regional variations. “So in the South, Anglo-Indian dishes tend to use pepper, cinnamon, cardamom; in the Goa-Mumbai belt, souring agents such as vinegar and kokum are popular, whereas in the East, the gravies use less spice,” notes Seema Chowdhry in Livemint.

At Bow Barracks, a newish restaurant in Bangalore named after an Anglo-Indian hub in Kolkata, you can order classics like Lamb Hussaini curry, Grandmother’s Country Captain’s chicken curry, and Brinjal and potato vindaloo. Talk about fusion.

Vindaloo comes from the Portuguese Vinha d’alhos (garlic- wine marinated dishes); the “aloo” comes from sounding like “alhos” (garlic)—potatoes were not part of the traditional dish but were added later, perhaps for cheap filler or to counteract the salt. While Railway mutton curry no longer needs to be preserved for long train journeys, the tamarind juice or vinegar that’s still added makes it tangy and tasty.

Aficionados like Bangalorean Bridget White Kumar keep Anglo-Indian cuisine in the limelight. A prolific food blogger—her blog is called Pepperwater, which is another way of saying Mulligatawny soup—and the author of several cookbooks, she also advises Bangalore’s 125-year-old Taj West End, which offers a generous selection of Anglo-Indian dishes. Now, a chota peg will go well with their sumptuous weekend brunch.