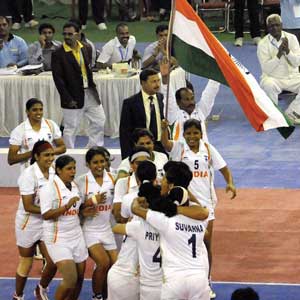 Indian women, not just men, compete—and excel—in this team sport that originated in India. This year, at the first world kabaddi championship for women, India received the world cup after beating Iran in the final round. The event in Bihar attracted 16 nations, including the U.S. and Canada. The world kabaddi championship for men, inaugurated in 2004, is held at three-year intervals. India won the top prize all three times. Iran, which also does well, was the runner-up twice, while Pakistan held that position once.

A kabaddi team has seven players, and the two sides take turns to send individual raiders to tag opposing team members before returning to their home territory. What makes it so challenging is that the raider has to hold his or her breath while in enemy territory. Kabaddi made its Asiad debut at the Beijing Games in 1990. India took the gold medal there, as it did in the subsequent six Asian Games, most recently in China again. Though kabaddi isn’t an Olympic sport yet, the hope is that it will make it to Rio de Janeiro in 2016. If that happens, India may well relive the era in which it had an impressive run for many years as the undisputed world champ in another sport—field hockey.