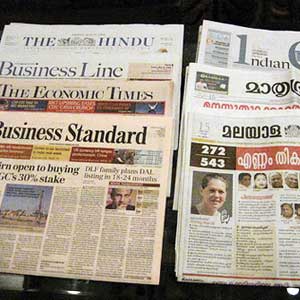 The news for newspapers in the U.S. hasn’t been good. The internet’s rapid rise, not to mention the economy’s recent decline, has changed the rules of the game for print dailies.

Many newspapers here have experienced staggering losses, which have forced some to fold and others to reinvent themselves for the digital age. Between 2007 and 2009, reportedly, newspaper revenues in the U.S. fell by 30 percent. While newspapers in other Western countries also suffered losses, though to a lesser extent, the news for emerging nations like China, Brazil and South Africa was encouraging. And the news was more than encouraging for India—in fact, no other country in the world can match its passion for newspapers.

The number of dailies in India, as per the World Association of Newspapers, rose by 23 percent to over 74,000 (in various languages) between 2005 and 2009. In the paid category alone during that period, there was a 44 percent increase, amounting to a total of 2700 newspapers. Of the 517 million newspaper copies circulated worldwide in 2009, India’s share was close to 110 million. In the U.S. that year, the figure was 46.3 million.

As per the 2010 Indian Readership Survey, Malayala Manorama has an estimated readership of almost 10 million, making it India’s bestselling non-Hindi daily. Both Dainik Jagran and Dainik Bhaskar, among Hindi newspapers, have a readership that’s well above 10 million. The Times of India remains India’s most widely circulated newspaper in English, with the Hindustan Times coming in a distant second. The Hindu (no. 3) holds sway in the South, while The Telegraph (no. 4) is popular in the East.  The Economic Times is India’s best-known business newspaper.