1. Kiran Ahuja, who earned a law degree in Atlanta, has been the executive director of the White House Initiative on Asian Americans and Pacific Islanders since 2009. Now she takes over as the chief of staff at the U.S. Office of Personnel Development. Where did Ahuja grow up?
(A) Alabama (B) Georgia (C) South Carolina (D) Tennessee

2. Climate change is a huge concern and, as the historic agreement last month showed, there’s a pressing need to address it. China and the U.S. account for 28 percent and 16 percent, respectively, of the world’s carbon-dioxide emissions from fossil fuel. What’s India’s share?
(A) 30 percent (B) 1 percent (C) 10 percent (D) 6 percent

3. Californian Trisha Prabhu, a 15-year-old high school student, is the founding CEO of a startup called ReThink. Spotting an issue that needed to be addressed in schools across the nation, Prabhu—who’s been a TED Teen speaker—launched a web and mobile app that does what?
(A) Provides tutoring (B) Combats cyber bullying (C) Promotes innovation (D) Teaches writing

4. Aziz Ansari has won wide praise for his Master of None comedy series on Netflix, which also released his fourth Live at Madison Square Garden special last year. He was number six in the “World’s Highest-Paid Comedians 2015” list put out by Forbes. Who tied in the fourth place?
(A) Mindy Kaling (B) Aasif Mandvi (C) Russell Peters (D) Kunal Nayyar

5. Harjit Sajjan, Canada’s defense minister, is not the only Sikh minister in the new government. In fact, the Canadian cabinet now has more Sikhs than the Indian cabinet. How many Sikhs did Prime Minister Justin Trudeau appoint to his cabinet after his Liberal Party won the election?
(A) Four (B) Ten (C) Two (D) Eight

6. In 2015, a year after the release of a Tamil film titled Ramanujan, we saw the release of an English-language film called The Man Who Knew Infinity. Both are based on the life of Srinivasa Ramanujan, who died in 1920 when he was 32. In which field did he gain posthumous fame?
(A) Cosmology (B) Philosophy (C) Religion (D) Mathematics

7. Taranjeet Singh Bhatia, a doctoral student in computer science in Florida, hasn’t made it to the final list yet, but he’s in the top 100, along with two other Indians, and was chosen from over 200,000 applicants. If he’s included in the final list of 24, where is he hoping to go in 2025?
(A) Moon (B) Earth’s orbit (C) Mars (D) Moon’s orbit

8. Which sport has the longest documented history in India? References to it can be traced back to at least the 13th century, points out Ronojoy Sen in his recent Nation at Play: A History of Sport in India. And as far back as 1952, India won its first Olympic medal in this category.
(A) Shooting (B) Wrestling (C) Hockey (D) Soccer

9. Nobel laureate Mother Teresa, who founded the Missionaries of Charity in India, died in 1997. Pope Francis recently approved the second step of her canonization, paving the way for her sainthood next year. Mother Teresa was an Indian citizen, but what was her heritage?
(A) Greek (B) Serbian (C) Albanian (D) Italian

10. India’s worst disaster in 2015 was caused by the monsoon rains that inundated Chennai, killing about 400 people and causing a lot of hardship in the region. The damage from the floods is estimated at $3 billion. In terms of population, where does Chennai rank among Indian cities?
(A) Third (B) Second (C) Fourth (D) Fifth The newest Indian-centric sitcom coming your way on American TV could be I Love Lakshmi, said to be partly based on the real-life experiences of co-writer Doug Prochilo, who is married to Bela Bajaria, a former beauty queen and now the president at Universal TV. Another forthcoming show, Code Black, will have Melanie Chandra as a co-star. But network shows, in the digital era, seem to take too long to gestate, and misses are more common than hits. Enter streaming. The Mindy Project is now on Hulu, and Aziz Ansari’s Master of None on Netflix. Then we have reality and comedy shows on various portals—available for viewing anywhere, anytime. Admittedly, not everyone wants to keep up with the Guptas (on Youtube.com) or follow the Keswanis (on People.com) or check out FOB and I (on Vimeo.com). But the point is that for those seeking niche entertainment—or audiences—nothing can beat the web.

In India, too, there’s been an upsurge of such online shows. No surprises. Take Arunabh Kumar, who launched The Viral Fever (or TVF) platform after his team’s pitches to production companies went nowhere. His show, TVF Pitchers, was uploaded on TVFPlay and later on Youtube. Yes, it did go viral, making it to the Internet Movie Database’s top 250 list. It also ranked 43 in a top 100 list, a feat that no other Indian show can claim. What’s it about?

Four young successful IT professionals chuck their regular jobs and launch their own start-up in a Mumbai suburb. Sound familiar? Another TVF show that’s drawing viewers is called Permanent Roommates.

Given India’s youthful population, the popularity of such shows is only growing. At least in the workplace, according to a Transfast survey, 62 percent of Indian immigrants who send money to India find life in the U.S. less stressful. Nevertheless, 83 percent of the respondents said they were overqualified for the jobs they hold in this country. Transfast, an international money transfer firm, surveyed 500 people who had worked in both countries. A big majority (83 percent) think the job opportunities here are better than in India, but about 61 percent also say they have to work longer hours than expected for what they earn. Unlike immigrants from other nations, many Indians (55 percent) expect to retire in their native land. What’s also noteworthy is that non-Indian immigrants found working in the U.S. more stressful—by a margin of 10 percent when compared to Indian immigrants—than working in their home countries. And in a Quartz India survey done at Duke, while academically advanced students in India spent time on extracurricular activities and with family (not unlike students here), they also spent time on academics during weekends—which the students here didn’t do.

Yet again, according to the World Bank, India tops the list of nations receiving remittances from their diaspora populations. The latest figure available for India was $70.39 billion. Among India’s source countries for remittances, the U.S. came second (at $10,844 million), followed by Saudi Arabia and the U.K. The most money came to India from immigrants in the U.A.E. ($14,255 million). India has been the top recipient nation at least since 2009, with China and the Philippines in the second and third places, respectively. Kate Darnton’s Chloe in India (Delacorte Books), for readers aged 9 to 12, is a cross-cultural tale involving a blonde American girl (Chloe) and her Indian classmate named Lakshmi. As fifth graders at Premium Academy in Delhi, they seem to have little in common, but what draws them together is their outsider status in the mainly upper-middle-class Indian milieu. Chloe is from another country, Lakshmi from another class. How do these misfits bond and learn from each other? Darnton, an American writer who spent five years in Delhi, drew from her experiences in India to tell the story. 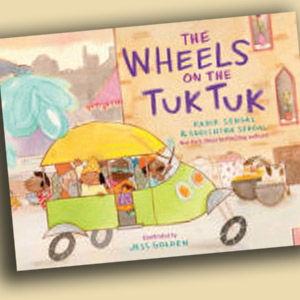 For younger readers (ages 4 to 8), there’s a new book titled The Wheels on the Tuk Tuk (Beach Lane), written by Surishtha and Kabir Sehgal, and illustrated by Jess Golden. It’s an Indian three-wheeler, better known as auto-rickshaw, that takes center stage here as it sets off on a wild adventure, with passengers on board, giving young readers a taste of India’s culture and customs. The Sehgals are from Atlanta.

N. H. Senzai’s Ticket to India (Simon & Schuster), for children aged 8 to 12, is a look at the subcontinent’s partition through the eyes of 12-year-old Maya, who travels by train to her ancestral village, Aminpur, after coming to Delhi from her home in California. Apparently, Maya’s grandmother had left behind a chest containing treasures when she fled to Pakistan. Maya gets separated from her sister, but she teams up with an orphan named Jai to uncover her grandmother’s secrets. 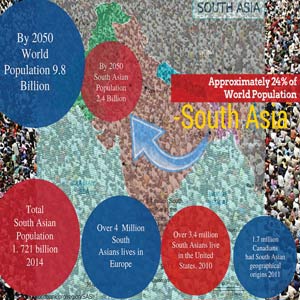 Here’s an interesting nugget that MASALA unearthed: People with traditional Indian beliefs that are moderate to strong tend to be more prone to type 2 diabetes and prediabetes than people with weak beliefs. Another finding: South Asians who have lived in the U.S. a long time (over 27 years) are both hurting and benefitting from the changes in their diet. They are more likely to eat food that’s lower in fiber and higher in trans or saturated fat. On the positive side, they reduce their consumption of sweets and sugar, along with rice and starchy vegetables. The unusually high rates of heart disease among South Asians cannot be accounted for by factors like obesity, which is not such an issue among South Asians when compared to other ethnicities. Can waist circumference be an issue? That’s what MASALA is exploring, among other risk factors, as it tries to uncover the causes of heart disease, and find the solutions that can help South Asians.

MASALA is the acronym for the Mediators of Atherosclerosis in South Asians Living in America study launched by researchers in two cities—San Francisco and Chicago—where 900 South Asian men and women are being observed and tested over a number of years. The team is headed by Dr. Alka Kanaya of the University of California and Dr. Namratha Kandula of Northwestern University. Overall, in the U.S., according to the CDC, heart disease claims the lives of about 610,000 people every year. That’s a quarter of all deaths. Coronary heart disease is the most common type, killing over 370,000 people annually.