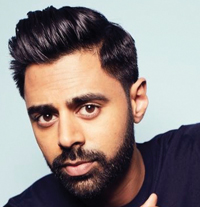 Hasan Minhaj is on a roll. For the second year in a row, he received the Peabody Award from the University of Georgia’s journalism school. While last year’s award was for his Homecoming King, a Netflix special, this year’s recognition was for the hit series Patriot Act with Hasan Minhaj, also on Netflix. He is on Time magazine’s “100 Most Influential People of 2019” list.

While Hasan Minhaj was the only Indian-American picked by Time magazine for its 2019 list, three Indians—Arundhati Katju, Menaka Guruswamy, and business tycoon Mukesh Ambani—were also included, along with Pakistani Prime Minister Imran Khan. Litigators Katju and Guruswamy were cited for the instrumental role they played in advancing India’s LGBTQ rights.

Indira Puri, a doctoral candidate in economics at MIT, was a Presidential Scholar and a recipient of Stanford University’s Firestone Medal and the J. E. Wallace Sterling Scholarship. And now she’s a 2019 Soros Fellow for New Americans, along with the following four other Indian-Americans: Sunil Kumar Joshi, Shreyas Vissapragada, Samir Paul, and Shamik Mascharak.

Atlanta luminary Dr. Sanjay Gupta is a recipient of the Ellis Island Medal of Honor, which recognizes U.S. citizens who have excelled within their ethnic group even as they contribute to “the American way of life.” A neurosurgeon at Emory University and Grady Memorial Hospital, he is CNN’s chief medical correspondent, and hosts shows like Vital Signs and Chasing Life.

Sandeep Das and Neal Devaraj (mentioned in Khabar recently) are among the 168 Guggenheim Fellows in 2019. An internationally recognized tabla virtuoso and composer with crossover appeal, Das has performed with Indian and Western maestros and ensembles. Devaraj is a widely honored chemistry and biochemistry professor at the University of California in San Diego.

Prakasam Tata is another recipient of the 2019 Ellis Island Medal of Honor. He’s the executive director at Center for the Transformation of Waste Technology, a nonprofit based in Illinois. Tata focuses on environmental education and the productive use of waste resources, and has had five decades of experience in environmental engineering and science, both in the U.S. and India.

Veera Hiranandani, a former book editor, is the winner of the 2018 Malka Penn Award for Human Rights in Children’s Literature. She was recognized for The Night Diary (previously mentioned in Khabar), a novel focusing on a 12-year-old girl of Hindu-Muslim descent. Set in 1947 during the trauma of Partition, Nisha’s identity seems split between India and Pakistan.

Disney fans won’t have to wait too long for its first Indian-inspired animated series for preschoolers. Mira, Royal Detective is scheduled to debut in 2020. Rather than Jaipur or Jabalpur, the series will be set in the fictional land of Jalpur. Leela Ladnier, 15, will give voice to Mira, and several Indian-American actors, including Kal Penn, will be heard in the supporting roles.

Raghu Karnad, as one of the eight winners of the 2019 Windham-Campbell Prize at Yale, gets an unrestricted grant of $165,000. Karnad, son of the distinguished playwright Girish Karnad, has been hailed for bringing attention to the important but neglected role of Indian soldiers. His acclaimed nonfiction book is titled Farthest Field: An Indian Story of the Second World War.

India continues to be the top beneficiary of a diaspora’s remittances to the home country. That amounted to almost $80 billion for India in 2018, according to the World Bank. Going by the 2017 figures, the Indian diaspora in the U.S. sent under $12 billion to India, with only two other groups—Mexicans and Chinese—sending more money to their home countries from the U.S. 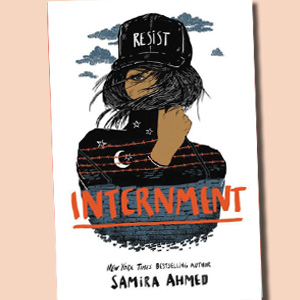 Samira Ahmed’s Internment (Little, Brown), a novel for young readers, will strike a chord if you’ve been troubled by recent events. The inspiration for Ahmed, a former high school teacher who also wrote Love, Hate & Other Filters, was an infamous episode in the nation’s history: the internment of Japanese Americans during World War II. In a story that has 17-year-old Layla Amin at the center, the reader ends up in a camp for Muslim Americans. But this is fiction, thankfully, allowing Ahmed to go in a different direction. How does Layla, with the help of friends inside and outside what’s essentially a prison, foment a rebellion against the camp’s director and guards? It may read like a thriller, but it’s a cautionary tale as well. “You don’t need to be a student of history to see how nationalism, disguised as patriotism, can take hold of a country, justifying terrible cruel acts,” notes the India-born author who grew up in the U.S. “You only need to turn on the news.” 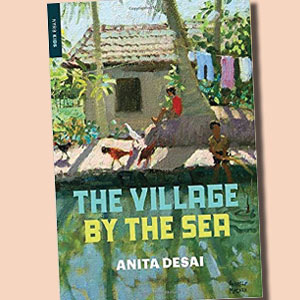 Anita Desai’s The Village by the Sea, reissued by NYRB Kids, is deservedly a classic, appealing not just to middle schoolers but to adults familiar with coastal India. Known for her elegant writing, Desai’s descriptive powers are at a peak in this novel, bringing the natural world to life. Set in a fishing village, it involves siblings Hari and Lila, two young teens who have to act like responsible adults because their parents suffered a setback. And their coastal village, too, would be dealt a blow if a proposed fertilizer factory is built there, giving the story an environmental angle with contemporary resonance. While a hopeful Hari heads to the city, Lila stays at home to take care of things. Desai has inspired Kiran, her Booker Prize-winning daughter, just as she was inspired by a late friend who also won the Booker Prize. In her introduction to At the End of the Century: The Stories of Ruth Prawer Jhabvala (Counterpoint), Anita Desai notes, “I had met someone who, like myself, regarded writing as a very private, almost secret practice, a product of the interior space of shadows and silence.” 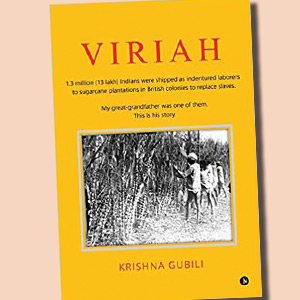 Viriah (Notion Press) is a tribute by Krishna Gubili to his great-grandfather. For three decades, Gubili devoted much effort and time, not to mention money, on a project that took him to South Africa to trace the epic story of his ancestor, who had left India in the late 1800s to work as an indentured laborer on a sugarcane plantation in South Africa. Gubili, now based in Pennsylvania, had first heard about his great-grandfather from his beloved grandmother, to whose memory he dedicates the book. Even finding his long-lost forebear’s name in the musty records was a herculean task, and the story Gubili tells—of his quest, his great-grandfather’s journey, and indentured labor—would have made his grandmother proud and grateful. The family pictures he includes are a bonus. “As the sugar industry burgeoned in South Africa, the sacrifices and struggles of 152,184 Indian laborers were never acknowledged,” he writes. “The most basic details about their lives proved difficult to find.” To Gubili’s enormous credit, he never gave up. 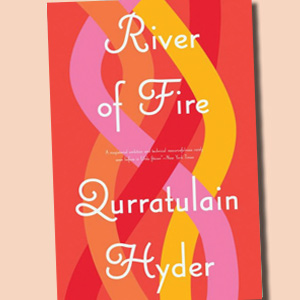 Qurratulain Hyder’s River of Fire, reissued by New Directions, is an English transcreation by the late author from her Urdu novel, which was published as Aag ka Dariya 60 years ago. Perhaps no other Urdu novel is as widely celebrated—Pankaj Mishra says it is “to Urdu fiction what One Hundred Years of Solitude is to Hispanic literature”—and it’s a shame that Hyder, unlike Gabriel García Márquez, didn’t win the Nobel Prize in literature. But she did receive other honors in her illustrious life, including the Jnanpith Award, Padma Bhushan, and Sahitya Akademi Award. Having lived in both Pakistan and India, where she returned for good in 1961, Hyder was able to bring a unique perspective to her fiction. River of Fire has gained renewed significance, given that India is at a crossroads today, with its secular foundations under threat like never before. Hyder’s multicultural opus, spanning two and a half millennia and featuring four recurring characters (Hindu, Muslim, Buddhist, and Christian), deserves new readers.