COVID-19  In-depth info for Indians in Atlanta/Georgia. Click here
Home > Magazine > Desi World > WHO, WHAT, WHERE, WHEN, & WHY; BOOK MATTERS 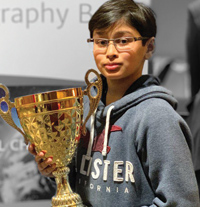 It’s been a stunning reversal of fortune for ex-billionaire John Nath Kapoor, previously one of the richest Indian-Americans. The India-born entrepreneur’s ragsto- riches story had a rude ending when he was convicted of a racketeering conspiracy. Found guilty of, among other things, bribing doctors to prescribe highly addictive opioids, he faces a long prison sentence.

Rajat Gupta, convicted of securities fraud, shows no remorse—and a stint in prison only seems to have hardened his stance. But his self-serving memoir, Mind Without Fear, is unlikely to salvage his reputation. There was a time when few other Indian-Americans were more highly regarded. Preet Bharara, who prosecuted Gupta, also wrote a book. It is called Doing Justice.

Shiva Oswal, better known as “Shiva, the destroyer” at national quiz competitions, has done it again. Most recently, the teen from California was crowned the junior varsity champion at the 2019 National History Bowl Bee. Hari Parameswaran from Ohio is the new varsity champion. Avinash Iyer became the junior varsity runner-up, while Eshaan Vakil is the varsity runner-up.

The Kings were already popular among hip hop enthusiasts in India, but their crowning moment came recently when they won first place and $1 million on World of Dance, NBC’s reality competition series. The 14-member team, formed in Mumbai a decade ago, won the hearts (and votes) of the three judges—Jennifer Lopez, Ne-Yo, and Derek Hough—in the third season.

Vishwesh Bhatt—the acclaimed chef at Snackbar, a French-Southern hybrid bistro in Oxford, Mississippi—has won a 2019 James Beard Award for Best Chef in the South. Having been nominated five times in the past, he has proved that six can be a lucky number. The India-born chef, an Oxford resident for over two decades, draws on his roots for his culinary creations.

An analysis of the census figures by SAALT (South Asian Americans Leading Together) shows that the Indian population in the U.S. grew by 38 percent between 2010 and 2017. There was a 72 percent increase in the number of undocumented Indians, reaching a total of about 630,000 by 2017. Almost a quarter million Indians overstayed their visas in 2016, according to the report. 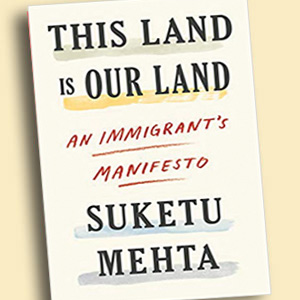 This Land Is Our Land: An Immigrant’s Manifesto (Farrar, Straus and Giroux) – by Suketu Mehta. The author of Maximum City: Bombay Lost and Found once noted how, if India lay south of the U.S. border, “talk-show hosts would rail against us just as they do against Mexicans.” This typically astute comment from Mehta could be a warning to those who think there’s more than one shade of brown. In the age of angry populism and anti-immigrant sentiment, there’s only one shade. This blistering polemic-cum-memoir reminds us that it’s the fear of immigrants that’s upending Western societies, not immigrants. Mehta mentions that he was bullied at a private school in Queens, New York, where his family had settled in 1977. “Donald Trump is like the fathers of the boys I went to high school with. He grew up in Jamaica Estates, then a gated white island in the middle of the most diverse county in the nation. That explains everything about him, his fear and hatred of people different from him.” 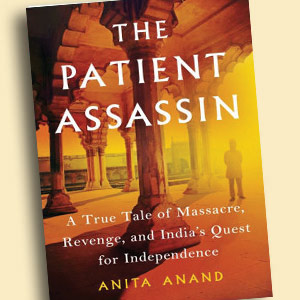 The Patient Assassin (Scribner) – by Anita Anand. This “true tale of massacre, revenge, and India’s quest for independence” begins 100 years ago. That was when a horrific incident at Jallianwala Bagh in Amritsar triggered India’s freedom struggle. While the broader story has been told by, among others, the historian Kim Wagner, whose new book is called Amritsar 1919 (Yale), Anand’s focus is more laser-like. The notorious General Dyer, who ordered his soldiers to fire on unarmed civilians, is well known. Less familiar is O’Dwyer, who, as Punjab’s lieutenant governor, fully supported Dyer—only to pay for it with his life two decades later. The story Anand narrates is how Udham Singh, a young Sikh who was injured in the Amritsar slaughter, came to assassinate O’Dwyer in London in 1940. Singh, who changed his name in prison to Ram Mohammad Singh Azad, was convicted and hanged the same year. Anand, an award-winning BBC journalist, is the co-author (with William Dalrymple) of Koh-i-Noor: The History of the World’s Most Infamous Diamond. 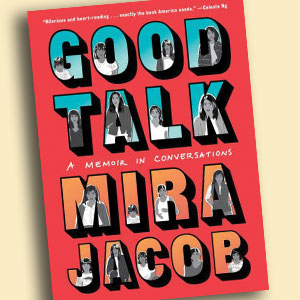 Good Talk: A Memoir in Conversations (One World) – by Mira Jacob. If Jacob was hoping to trigger a discussion on multiracial families, she has succeeded admirably. Her best-selling graphic book (not suitable for young kids) was prompted by the 2016 U.S. election and by her then-six-year-old biracial son’s questions on race. The memoir is frank, poignant, illuminating, provocative— and the drawings can be amusing, even startling. She reveals how people, including relatives, think and talk behind closed doors. And the book is often funny. Jacob, who has also written a novel, artfully inserts family pictures among the black-and-white drawings, as when we read about her parents, who immigrated to this country just a week before Martin Luther King Jr. was assassinated. “When I am with you, people think I look like you and when I am with Daddy people think I look like him except in the summer because that’s when I am super deluxe brown and Daddy isn’t because maybe he drank too much milk…” her son says. 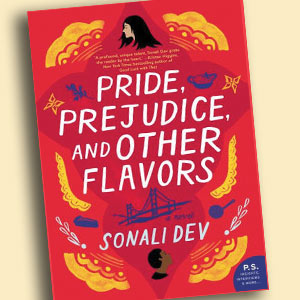 Pride, Prejudice, and Other Flavors (William Morrow) – by Sonali Dev. For those who can’t get enough of Jane Austen, there’s no cause for concern. Here’s another novel inspired by an English classic that’s always popular. And it’s well suited for the beach this summer, or perhaps the mountains. But Dev’s version, the first novel in her new series focusing on an Indian-American family, is only loosely based on Pride and Prejudice. “There are no daughters to be married off here,” Dev writes. “Only imbalanced power dynamics and preconceived notions to be navigated.” In a gender twist that’s bound to delight many fans, Dev’s Trisha acts more like the aloof Darcy, while her male protagonist seems to have more charm, not unlike Austen’s Elizabeth.

Teens can check out There’s Something About Sweetie (Simon Pulse) by Sandhya Menon, which isn’t a follow-up to her When Dimple Met Rishi. But it could be a sequel to Meet the Patels. Ashish Patel’s family, as you might have guessed, can’t stay out of his love life.