COVID-19  In-depth info for Indians in Atlanta/Georgia. Click here
Home > Magazine > Desi World > Who What Where When Why, Tots TV, Exotic Drinks, Books

Who What Where When Why, Tots TV, Exotic Drinks, Books 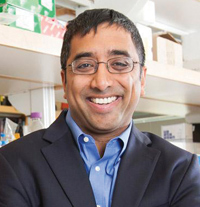 Jay Shendure, professor of genome sciences at the University of Washington, Seattle, is the 2019 recipient of the $50,000 Richard Lounsbery Award for his cutting-edge research in the second wave of genomics. He was also one of the 18 honorees chosen in 2019 by the National Academy of Sciences. They have all been recognized for making major contributions to science.

The annual Dan David Prize, based at Tel Aviv University, is worth $1 million in each of three categories (past, present, future). In the first category this year (macro history), UCLA Professor Sanjay Subrahmanyam gets $500,000 for his interdisciplinary exploration of colonialism and the encounters of Asians, Europeans, and Americans in the early modern era (1400 to 1800).

Chaya Bhuvaneswar is a physician and a fiction writer. Her White Dancing Elephants, named a best book by some outlets last year, won the Dzanc Books Short Story Collection Prize. It “explores urgent themes of sexual harassment and racial violence through a poetic lens, exploring a cast of marginalized characters and infusing them with bracing life,” notes Entertainment Weekly.

Raj Chetty, one of the five new fellows picked by the American Academy of Political and Social Science, is a Harvard economist who frequently uses big data in his research to understand issues like economic mobility. The academy has so far elected 134 fellows from various fields. They’re all notable scholars and policymakers who have made an impact in the public domain.

Sanjay Ghemawat and Jeff Dean, as engineering geniuses, hold an exalted position at Google. The company’s hierarchy of engineers goes from level 1 to 10. And then there is level 11, which is such an exclusive club that only two employees—Ghemawat and Dean—belong to it. So far, no other Google Senior Fellows, although they’re all leaders in their fields, have made it to level 11.

India recently hosted the first Mallakhamb World Championships. Better known as “Yoga on a Pole,” Mallakhamb’s origins in India are obscure. The ancient sport involves intricate (if not impossible) yogic poses and routines on an 8.5-foot pole that tapers at the top. Seen as a test of skill and endurance, the inaugural event in Mumbai drew about 100 participants from 15 nations.

At the age of 100, Tao Porchon-Lynch is the world’s oldest yoga instructor. In fact, according to the Guinness World Records, she has held that status since 2012. Of Indian and French descent, she’s a 2019 recipient of India’s Padma Shri award. Porchon-Lynch founded the Westchester Institute of Yoga in 1982, but she has traveled widely and taught yoga in many places.

Indiaspora, a network of established and emerging Indian-American leaders, launched a threeweek program for students of Indian descent. Dubbed HeritageINDIA, eight high school students will be picked for the first fully funded trip to India later this year. After spending some time in Delhi, they will travel to Gujarat and Kerala for an immersive experience of their ancestral land.

While the 2019 Oscars for movies were awarded last month, there will be another ceremony later this year (“Oscars of Science”) for the recipients of the Breakthrough Prize and New Horizon Prize. Rana Adhikari, a Caltech physicist, is on one of the three teams winning the New Horizon Prize in Physics; his research is on present and future ground-based detectors of gravitational waves.

The Indian-made Vande Bharat Express (aka Train 18), which runs between Delhi and Varanasi five times a week, had its debut last month. Equipped with automatic doors and climate control, WiFi, and bio-vacuum toilets, it is India’s first semi-high-speed train. The engineless express train covers a distance of about 478 miles in approximately eight hours, with only two stops.

TV CHANNEL FOR TOTS TAKES OFF 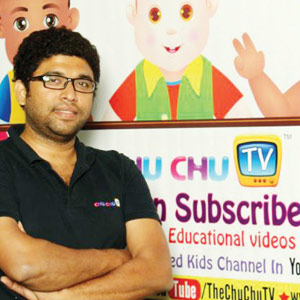 Most people haven’t heard of ChuChu TV, but it is India’s sixth most subscribed YouTube channel. And it is gaining ground in other places. Of course, that may be nothing compared to India’s T-Series, which is in a neck-to-neck race for the honor of being the world’s most popular YouTube channel. And SET India (Sony Entertainment Television India), with over 40 million subscribers, is the world’s sixth most popular YouTube channel, according to Statista. But ChuChu TV’s YouTube world ranking of 47, with more than 29 million subscribers across 100 nations, is more than respectable, considering that its devoted viewers are preschoolers.

This animated series for the younger set seems tailor-made for the digital age. It began six years ago when Vinoth Chandar, a Chennai-based techie, realized that his daughter—affectionately called Chu Chu—liked watching YouTube videos. He enhanced the experience for her by creating animated videos of nursery rhymes. Her dances became the inspiration for the sketches he drew for the clips, and the catchy tunes and cartoons didn’t take long to attract a wider audience. ChuChu TV has become a big player in edutainment—and it’s now one of the most popular YouTube channels for that age group. As reported last year, three of its videos— including “Johny Johny Yes Papa”—have crossed a billion views each. Now ChuChu TV has signed a deal with Australia-based Moose Toys to sell ChuChu dolls and other products in major English-speaking nations. Not bad for a dad who started the channel on a whim in 2013 to entertain his little girl. 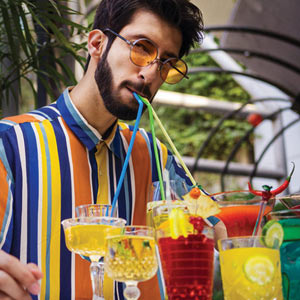 If you’re addicted to any food shows, you may already know what adventurous travelers are sampling in India. The range is broad, the possibilities fascinating. Food would take up too much space, so how about sticking to drinks? Turmeric latte, a faddish beverage available in trendy cafes here, won’t appeal to many people—but perhaps they’ll go for Doodh soda. That’s available in northern India. The doodh (or milk) is steamed, although the drink is not a latte. Instead, the milk is then chilled in a metal bucket and then mixed with a soda like Sprite or Coke. Some consider it “healthier than just plain soda,” Atlas Obscura points out, and Doodh soda is “also a refreshing counterpoint to spicy food—like a light lassi.”

For something more exotic, how about Kanji or Feni? Gastro Obscura includes both these alcoholic options, along with something called Szechuan Button. No, it’s not a new dish for fans of Indian Chinese cuisine. It’s a yellow herb that’s widely available in India, and it adds a kick to your cocktail. No wonder it’s called buzz button or electric daisy. As for Feni, this Goan fruit concoction featuring cashews is so famous that it received “Geographical Indication” status. Kanji, on the other hand, uses carrots and is especially popular during Holi. Other ingredients in this fermented drink with probiotic benefits include mustard seeds, beets, and sea salt. Think of it as an Indian kombucha. Teetotalers seeking a buzz needn’t feel left out— Atlas Obscura has a great suggestion. It’s called Kumbakonam Degree Coffee. Chicory is an important ingredient, but so is milk, especially if it comes straight from a cow’s udders! 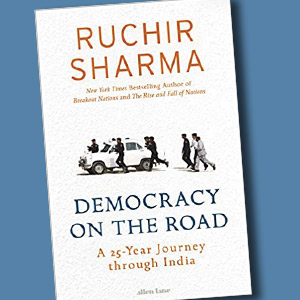 Ruchir Sharma’s Democracy on the Road: A 25 Year Journey through India (Allen Lane) is timely. Given Sharma’s credentials—he’s the head of emerging markets and chief global strategist at Morgan Stanley Investment Management—readers couldn’t ask for a better interpreter of India’s upcoming election. Also a best-selling author, his previous books are titled Breakout Nations and The Rise and Fall of Nations. For the new work, Sharma and his cohorts (20 in all) hit the road in India. Combining autobiography and first-hand reporting with the rigorous analysis he is known for, he provides clues to what we can expect and sheds light on how Indians see their politicians. “The thread that runs through the tests of Indian democracy is intimacy and connection: winning campaigns need to understand the ties that bind Indian voters to community and family, their frustration with government and the slow pace of economic progress, the pain of rising prices, and their sense of disgust with both corruption and the justice system,” Sharma writes. 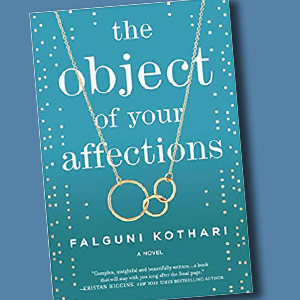 The Object of Your Affections (Graydon House) is an unusual romance novel by Falguni Kothari. The New York-based author is also an award-winning Indian classical, Latin, and ballroom dancer. As in My Last Love Story, her earlier work, there’s a love tri- angle and—again—she overturns the conventions of the romance genre. Her characters, not just the plot, are intriguing, starting with the names: Paris Kahn Fraser is of South Asian descent, while Neal Singh Fraser, her husband, is Scottish. Paris, adopted by a Jewish father, is an assistant district attorney who wants to be a mother without giving birth. Enter Naira Dalmia, a young widowed friend who is originally from Mumbai. The novel, described by one reviewer as “an intensely original and provocative story that tackles the complex challenges a modern woman faces within marriage,” unfolds when Paris and Neal ask Naira to be a surrogate mother. Kothari hadn’t planned to be a writer until, as an immigrant, she fondly remembered the stories from her childhood in India. 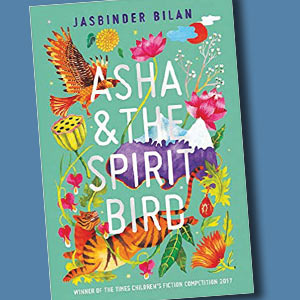 Asha & the Spirit Bird, a winner of the Times (U.K.) Children’s Fiction Competition, was recently published by Chicken House, which co-sponsored the prize. Meant for the 9-12 age group, the magic realist story by Jasbinder Bilan takes us to rural India, where Asha’s father, the family’s sole breadwinner, has stopped sending money from the city. What happened to him, and will they lose their house? A spirit bird arrives to whisk away Asha and her friend Jeevan, allowing them to look for Asha’s father and save their house. Also, the prolific Katherine Rundell came out with Into the Jungle: Stories for Mowgli (Walker Books) late last year. Kristjana Williams did the evocative illustrations. Rundell, winner of the 2017 Costa Children’s Book Award, got permission from the Kipling estate for this sequel to The Jungle Book. So, yes, readers will encounter all those beloved characters again “as Mowgli develops from a rather self-centered child to one who cares about his extended jungle family,” according to Kirkus. 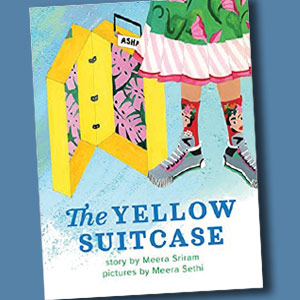 The Yellow Suitcase (Penny Candy Books), written by Meera Sriram, is for the 5-10 age group. The bright, catchy illustrations are by Meera Sethi. While Sethi lives in Canada, Sriram—a former engineer who grew up in India—is based in the U.S. This is a rare book in that the author considers grief and mourning from a young child’s point of view. Following the death of her beloved grandmother, Asha goes to India with her parents. But why are they traveling with an empty suitcase, and how does the knowledge that the grandmother left something behind for Asha help her deal with the loss? “The focus on Asha’s feelings gives this book powerful bibliotherapeutic value, and the ending brings a gentle and satisfying resolution,” notes Booklist. For even younger readers, we have Divya Srinivasan’s Little Owl books. She’s the illustrator and writer. Little Owl’s Snow, published by Viking late last year, gives us a glimpse of winter’s first glorious snowfall—from the owl’s perspective.