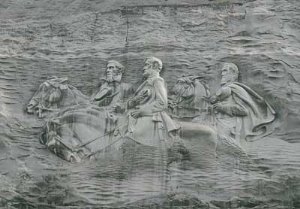 I have lost count of the number of times I have enjoyed Stone Mountain Park, surely one of the leading tourist attractions of metro Atlanta. And the number of times I have looked up with awe and regard at the three faces carved into the mountain. In my initial days close to 30 years back I understood only that they were “war heroes.” Who wouldn’t respect such noble men? I was blissfully unaware of the nuances of the wretched chapter of American history that they belonged to.

Slowly, one tidbit at a time, with each passing visit to the Park, and with each passing year in the States, I have learnt more about those three, and about how they fit into the larger tapestry of what is referred to around here as “the Recent Unpleasantness”—the Civil War. While my respect for them as brave men willing to die for their cause has never receded, I can’t say the same for the cause or the ideology they represented. That has steadily stumbled as I have gradually come to learn more about the intricacies of the Civil War.

Despite my increasing curiosity and exposure to various aspects of this history, I remain a casual student, and therefore quite a neophyte about it compared to historians, or even compared to those who are intimately intertwined with it through having ancestors who were active players in this War. And yet sometimes it is this fresh perspective—devoid of blinders or vested positions that helps one see that which is otherwise buried in a mountain of pride and prejudices of generations. It pains me to see the lengths that some Southerners go to convince themselves and the world that the Civil War was not about slavery—even when the charter documents of many of the Confederate States themselves have spelt out that their quest was to hold on to white supremacy and slavery. Some of those charter documents were explicitly against states’ rights. The fact that the North’s record on wanting to abolish slavery was far from pristine, doesn’t make the South any less culpable as a bastion of slavery.

And it pains me also that there is still a good bit of investment in the South in celebrating (as opposed to just preserving) the Confederate heritage. Even after close to 150 years, the War seems to continue to simmer in the hearts and minds of some if not many in the South.

On the flip side, what I am proud about of the region that I now call home is that in my 30 years here I have never personally felt that I lived in a racist community. Far from it. Everywhere—in my neighbourhoods, in the supermarkets, at public places, in my children’s school or Boy Scouts, or at work, I have felt nothing but welcomed. Sure, at times I have sensed aloofness and even condescension. Yet, my personal experience here is largely characterized by Southern hospitality—warmth, grace, charm, and respect.

That doesn’t by any stretch mean that things are perfect here. Racial profiling, discrimination, tension, and outright racist incidents are very much alive. But racism is no longer just a Southern thing, rather it’s a national issue. In fact recent studies have revealed that New York has the country’s most segregated schools. What Southerners resent, rightfully, is the continued baggage of being seen through a historical context as racially backward compared to the North, when in reality that doesn’t seem to be the case any longer. As per media reports in recent years, there is a spike in the numbers of blacks migrating from the North to the South.

Coming back to the three faces that adorn Stone Mountain, today, unlike when I first laid my eyes on them, I am fully cognizant they were heroes of the “wrong” side. Yet, I will continue to admire them. Why?

Even putting myself in the shoes of black Americans, I believe we need to account for the fact that the collective consciousness of the time was simply not evolved enough to see the truth of racial equity. For example, just a couple of decades back many believed homosexuality was a perversion. By today’s awakened standards, that society of the recent past could only be described as homophobic. If in a single generation we have seen such an evolution in how gays are perceived, why then should we judge historical figures from a century and a half ago based on today’s standards? After all, these men were not deviants like Hitler. They were leaders in their communities who thought they were simply fighting against “outsiders” who wanted to dictate their lives and lifestyles.

So, this summer, I look forward, for the umpteenth time, to spreading our picnic on the lawn of the Confederate Hall to watch the laser show playing out against the regal backdrop of the faces of President Jefferson Davis and Generals Robert E. Lee and Stonewall Jackson on that rock wall.