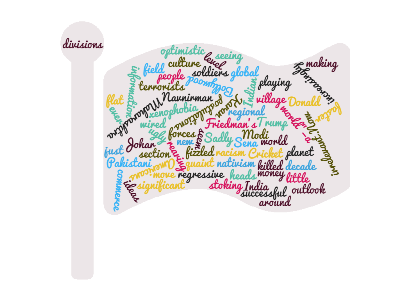 In 2005, Thomas Friedman, in his iconoclastic best-seller The World is Flat, said that we were undergoing a paradigm shift brought on by technology and the internet. According to this award-winning New York Times columnist, forces of insularity, parochialism, nationalism, and even national borders, would soon give way to a “flat world”—a global village that would be a level playing field for commerce and culture. A new, wired world where information, ideas, money, and people would move around the planet faster than ever before, making historical and geographical divisions increasingly irrelevant.

Now, just a little over a decade from that optimistic outlook, seeing how Donald Trump has been successful in stoking nativism, racism, and xenophobia in a significant section of Americans, Friedman’s postulations seem quaint and fizzled.

Sadly, the same regressive forces are rearing their ugly heads in India where, in response to an attack by Pakistani terrorists that killed 20 Indian soldiers, the regional Maharashtra Navnirman Sena (MNS) party decreed a ban on Pakistani actors in Bollywood. Is it an official ban by the Indian government? No. But it may as well be—because the goon-enforced ban that promises to cause damage to theaters that would play movies with Pakistani actors as well as to the producers, directors, and actors who make movies with them—is already having a chilling bullying effect on Bollywood. Karan Johar, easily one of India’s biggest filmmakers, after continuing to speak against the ban for many days, suddenly capitulated and offered a video statement about how he would henceforth never employ Pakistani actors.

Does it mean Friedman was wrong? Instead of a flatter world, are we moving toward building walls in the form of barriers to cross-border commerce and culture? I don’t think so. Whether it takes another decade or a few, the ultimate trajectory of the world, if it has to survive and thrive, has to be toward a flatter world. The basis of such an assertion is not utopian idealism, but hardcore pragmatism.

Take the ban on Pakistani artistes, for example. Predictably, the national discourse on the issue has divided the nation in two camps: (1) the pseudo patriot who can’t distinguish between a civilian and a terrorist, or even a civilian and his dysfunctional government, one that can’t even prevent countless terrorist attacks on its own land; and (2) the so-called “antinationalists” who argue that arts and culture should not be held hostage to geopolitical conflict.

Holding Fawad Khan, Mahira Khan, and their ilk—Pakistani actors active in Bollywood—responsible for the actions of some terrorists in a conflict-ridden area makes as much sense as penalizing an average Indian citizen, let’s say in Kerala, for the deaths of thousands of Sikhs killed in the 1984 riots. I think the poor Keralite would be highly indignant if somehow he was made to suffer personally for the failures of his central government.

The pseudo patriot’s case is as fickle as it is unfair. Where were these ubernationalists when the Indian Prime Minister invited the head of the Pakistani state to his inauguration? Was Pakistan not our sworn enemy then? Was Modi antinational?

Karan Johar was absolutely correct in his statement that during those honeymoon days of Modi as PM, it was the government itself that was encouraging cross-border outreach. Cricket and Bollywood were being recruited as agents of such outreach. Now, to suddenly turn the tables on them and vilify, traumatize, and bully them for doing precisely what the nationalist government encouraged them to do is just criminal.

We can only be considered modern civilizations, as opposed to tribal or feudal ones, if we allow the bounty of culture, commerce, people, and ideas to flow freely across borders. Sure, there may be practical considerations such as vetting when there is conflict between nations, but a unilateral ban based on drummed up pseudo patriotism takes us back in time, not forward.