Guest Editorial: Be a Man 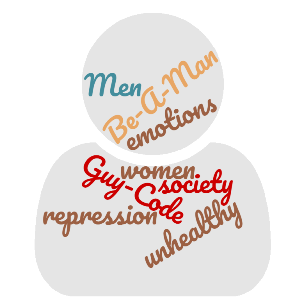 Males and the power they exercised in the last election cycle continue to be discussed. Male sexual impropriety in the fields of technology, Hollywood, and television are hard to miss. Discussions of the actions of men seem to be all around us. Something that rarely gets airtime in these discussions is the topic of emotional vulnerability among men. Yes, you did read that right—emotional vulnerabilities in men, not women.

What does it mean to be a man in today’s society? Social conditioning of men from a young age emphasizes the bottling of emotions, with a display of emotion associated with weakness. And both males and females frown upon any display of emotional weakness among men. And this starts young. Very young.

I am happy that it has always been socially acceptable for me to cry. I cried on the school playground when I fell down; I cried when I lost a loved one; heck, I sit with a box of tissues when I watch a movie to this day! How many men can say that they are treated with indulgence and support when they cry? Pause to think about that. To simply shed tears is frowned upon, even when there is no physiological difference between men and women with respect to their emotional states. In fact, what we find in male babies is quite revealing.

The New York Times reports, “One study out of Harvard Medical School and Boston Children’s Hospital in 1999 found that 6-month-old boys were more likely to show “facial expressions of anger, to fuss, to gesture to be picked up” and “tended to cry more than girls.” “Boys were also more socially oriented than girls,” the report said—more likely to look at their mother and “display facial expressions of joy.” Boys as infants are clearly expressing intense emotive involvement even more than girls. What do we do to these male infants who are expressing emotions freely?

What I read next in the New York Times essay, “Teaching Men to Be Emotionally Honest,” by Andrew Reiner made my eyes moisten. He states,

Last semester, a student in the masculinity course I teach showed a video clip she had found online of a toddler getting what appeared to be his first vaccinations. Off camera, we hear his father’s voice. “I’ll hold your hand, O.K.?” Then, as his son becomes increasingly agitated: “Don’t cry!… Aw, big boy! High five, high five! Say you’re a man: ‘I’m a man!’ ” The video ends with the whimpering toddler screwing up his face in anger and pounding his chest. “I’m a man!” he barks through tears and gritted teeth.

How can there not be repercussions for this bottling of emotions? Starting young with constant reinforcement through adulthood, men are consistently encouraged to repress emotions. This repression and a subsequent need to assert power in other ways leads to various outcomes that undermine the tenets of a healthy society for males and females.

Michael Kimmel, the renowned sociologist and leader of masculine studies, in his essay “Bros Before Hos: The Guy Code,” says that young male adolescents “hear the voices of the men in their lives—fathers, coaches, brothers, grandfathers, uncles, priests—to inform their ideas of masculinity.” And with these voices in their minds, they cite “not crying,” as one of the first rules of the “Guy Code.” Other predictable unwritten rules include “It’s better to be mad than sad; take it like a man; nice guys finish last.”

Can we change this history? Can we allow boys to just cry? As I sit whimpering through a movie, with indulgent smiles from friends and family, I will stop to think about this.

— Nirupama Vaidhyanathan is the Managing Editor at India Currents, where this was first published.