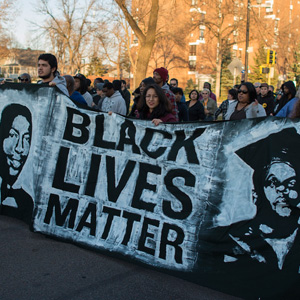 Whether on the side of African-Americans or the police, there is an urgent need to shift the focus from blame game to introspection—before more needless loss of Black or Blue lives.

She: “Please stop by at the store and pick us up some apples and oranges.”

He: “Hmm, why?? Do you have a problem with bananas and grapes? Aren’t all fruits good for you? Why are you favoring only apples and oranges?”

Pardon the pun, but that’s a darn fruity response, wouldn’t you say?

It’s no different when your knee jerk response to “Black Lives Matter” (BLM) is “All Lives Matter” (ALM). And, unlike buying fruits, throwing out an ALM in response to BLM is more than just nonsensical—it’s downright pejorative. It’s like flipping the middle finger at the problem—an alarmingly disproportionate number of Black men being killed in police encounters, often in questionable circumstances: Michael Brown, Eric Garner, John Crawford, Tamir Rice, and now, back-to-back killings of Alton Sterling and Philando Castille. And for each such high profile case, there are hundreds of others that remain under the radar.

Some of us—Asians, Hispanics, Whites or other—become part of the problem when we fail to recognize these feelings of anguish, and in our callous cluelessness shove an “All Lives Matter” in the face of “Black Lives Matter.” The attitude that comes with ALM (versus the empathy that BLM evokes) prevents non-Blacks from understanding the pain, helplessness, fear, and anger that Blacks are feeling. It’s an epidemic!

Under the current circumstances, BLM is not only a valid mantra and movement, but a direly needed one.

Corruption of the Black Lives Matter movement
But as with every activist movement that involves the masses, there is the possibility of corruption of original values, objectives, and methods. In the case of BLM, its fringe has engaged in inflammatory rhetoric and hyperbole—making the entire police fraternity its enemy. That’s a recipe for escalating not solving—the problem! We have seen the results in Dallas and Baton Rouge.

This happens because, as in most conflicts, some elements of BLM are overwhelmingly inclined towards blame rather than on reflection and introspection. The overall Blacks-police dynamic can be reversed only if BLM shifts some of its energy from singling out cops to soul-searching. (The reverse is also equally needed: introspection and correction of police procedures and culture).

Introspection on the side of Black Lives Matter
This brings us to a critical element at play in the dynamics between law enforcement and Blacks that is largely ignored in BLM activism: the conduct of civilians in a police encounter. In far too many high profile incidents of Black men being killed by police, there has been at least one or more of the following alleged actions on the part of the victim: disobedience, defiance, arguing with an officer of the law, resisting arrest, aggression, absconding, brandishing a weapon, etc. Let me be very clear on two points: (a) I realize such is not the case in all encounters. (b) Such bad behavior by itself cannot be reason enough for the police to use lethal force, in most cases.

And yet I am left surprised that time and again videos are circulated on social media as evidence of police brutality—with not a single word about the fact that the encounter would not have escalated if the civilian would have simply avoided the above mentioned set of behaviors. I am not sure if it’s an ingrained reaction to the history of slavery and the abuses suffered at the hands of the KKK during the segregation eras, but there seems to be widespread defiance and distrust of the police amongst African Americans. It’s sad to think that many of the dead victims in these cases would have been alive if they had simply complied with an officer of the law.

Yes, it’s quite possible that you may be unfairly pulled over, or that the officer abuses his authority. But what civilians forget is that a police encounter is not a court of law. This is not the time and place to argue your case. The one and only thing to do when pulled over by the police is to obey their orders. That’s the only way law enforcement can be effective. Will there be officers who will abuse this privilege? Of course. But if you have the misfortune of facing one of them, your chances of not being shot and killed are much better if you are completely compliant.

The civilian has far more control and responsibility in a police encounter, than what BLM activism suggests. If the movement is serious about preventing such police abuse, it needs to put at least some emphasis on educating and encouraging Black youngsters to cooperate with, instead of defying law enforcement.

Introspection on the side of the police
On the side of the police, it amazes me to see, in some of these high profile encounters, trigger-happy officers apparently on a murderous rampage––as opposed to trained professionals who should know how to defuse a hostile fellow with a single strategic shot or two. Yes, yes, I understand the adrenaline rush, and how fear impairs judgement; but I am sorry if I hold professionally trained police officers to higher standards than civilians. Time and again we have seen overtly aggressive behavior on the part of police officers—a clear abuse of their power.

While obedience to the police officer is the best advice for civilians, a civilian’s insubordination alone should not be reason enough for a police officer to escalate an encounter to an aggressive one. Only the threat of bodily harm to the officer or others justifies pulling out Tasers or guns. Most everything else, such as insubordination, could perhaps be better addressed through summons, fines, and even jail time—after the fact, when the heightened tension of a roadside encounter has faded.

But there seems to be a police culture in some circles that thinks otherwise. I’m no expert, but what I see is Tasers and guns coming out way too soon and often in disproportion to the offense at hand.

From better background checks to better training, there’s much that police departments could do to improve the situation. Meditation, for example, has been found very effective by police departments in Canada and elsewhere in the world. Advanced practitioners claim that sustained practice brings a slow-motion-like trance in high adrenaline situations, giving one a better access to the gap between stimulus and response—the crucial factor for so many policing situations.

Regardless of the specific solutions, the polarization, and consequently the collateral damage to Black lives and Blue lives, will only get worse—unless both sides shift from blame-game to introspection.