COVID-19  In-depth info for Indians in Atlanta/Georgia. Click here
Home > Magazine > Editorial > Of Media Bias and Responsibility in the Age of Trump

Of Media Bias and Responsibility in the Age of Trump 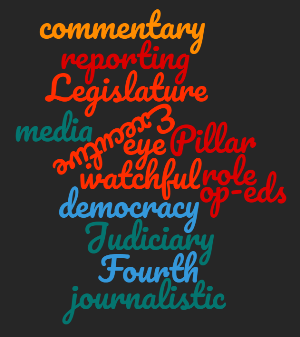 Judging from the numerous comments on social and mainstream media, it is fair to say that a majority are clueless about the role of media in a democracy. There are far too many who believe that the one and only role of media is to inform, nothing more.

Informing citizens in a neutral and unbiased manner is certainly a foundational function of media. Such reporting is, admittedly, the mainstay of journalism. Since it is this role of media, of unbiased reporting, that is primarily etched in the minds of the masses, there are many who reactively shout “media bias” as soon as they come across any kind of opinion in mainstream media, even when it’s outside the realm of reporting.

What they fail to realize is that the role of media does not end with journalistic reporting. It is actually the commentary and the op-eds that make media a truly effective Fourth Pillar of democracy: keeping a watchful eye on the other three—Executive, Legislature, and Judiciary.

From that standpoint, having a position on current issues is not only appropriate but actually a crucial role of media—if it is to serve effectively as the Fourth Pillar.

How then is such opining different from that of talking heads such as Sean Hannity or Rush Limbaugh, for example? They are worlds apart. It’s not the mere fact of broadcasting a position in the public that is the problem; the problem rather is with what level of integrity it is done. From journalism schools to reputable media houses, there is a sacrosanct emphasis on factual and unbiased reporting. There are journalistic oaths to stay true to a code of ethics that are valued by credible media. That doesn’t mean it always plays out perfectly in the real world; flaws are inevitable in any human enterprise. And yet, a stated intent and commitment to these ideals makes all the difference.

In contrast, talking heads like Hannity and Limbaugh are self-proclaimed entertainers whose primary tool is loud rhetoric. They are career ideologues whose success, and even their very existence, is directly dependent on them being a mouthpiece of a side. Again, in contrast, the natural biases of professional media outlets such as, let’s say NPR or The New York Times, come not from such a compromised agenda, but rather from a place of informed stance and integrity. That doesn’t mean they are always right or that they have a monopoly on truth; but it certainly makes them far more credible than ideological hacks, sundry bloggers, and lay social media commentators.

This distinction becomes quite the more relevant now, considering we have the most contentious President in the history of the country. Mainstream media gets undeserved flak for coming down hard on Trump. But if professional ethics and conscience is guiding these opinion shapers of mainstream media, and if, as a result, they see Trump as the most dangerous president of all times, then not calling him out would amount to a grave failure of their responsibilities as a watchdog.

It is this that will guide our continued vigilance against any agenda of racism, xenophobia, fascism, and such, to which this president has demonstrated a proclivity. Some of our readers, especially those who are vested with the Republican Party, have called us biased on that account. We proudly wear that accusation as a sign that we are not failing in our duties towards our readership and towards our adopted homeland.