Home > Magazine > Editorial > Presidential Election 2020: Are We Still Hesitating to Choose Between a Train Wreck and Sanity?

Presidential Election 2020: Are We Still Hesitating to Choose Between a Train Wreck and Sanity? 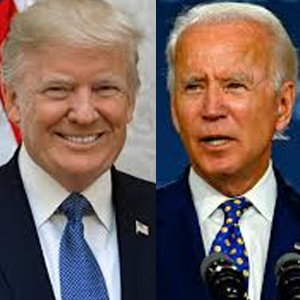 A bit past mid-September we were approaching 200,000 deaths in the U.S. due to Covid-19. This heavy toll, even when adjusted for population count, is five times more than Germany and 100 times more than South Korea.

While the coronavirus pandemic humbled most nations throughout the world, it is also true that most nations in the developed world have managed to overcome the crisis and return to relative normalcy. In contrast, the United States, the so-called superpower of the world and the global leader in science and innovation, is facing a long drawn out human and economic crisis.

And yet we have a President who, in a blatant display of narcissistic megalomania, is steering America with a “science be damned” attitude in favor of wishful thinking and personal delusions. Trump’s tendency of relying on baseless convictions and political expediency is entirely responsible for this alarming number of deaths.

“I don’t think science knows,” President Trump famously responded to California National Resources Secretary, Wade Crowfoot, who had confronted him the statement, “I wish science agreed with you.” Crowfoot was talking about the recent wildfires in California and climate change.

To serve their dogmatic ideology and selfish political calculations, Trump and his party have made science-denial a standard operating procedure in how they are running (ruining!) the country.

Trump’s “qualifications” are a string of failed businesses, and being a party in an ungodly number of lawsuits—about 3500—many of them filed against him for racial discrimination, debt collection, defrauding students in his so-called Trump University, and many other wrongdoings! His track record is more suggestive of a mafia boss than the President of the United States.

Far from making it great, the damage Trump has done to America is appalling: putting us in the path of environmental catastrophes, shredding our strong ties with allies, cozying up and possibly colluding with rogue states like Russia, disrupting global economy through unwarranted trade wars that have proven to be lose-lose affairs, and skyrocketing our federal deficit and debt even before the global pandemic.

And now, with the demise of Justice Ruth Bader Ginsburg, the prospect of the Supreme Court turning further Republican looms large. It would give control of all three branches of the government to such an unhinged authoritarian. This, without hyperbole, could turn the U.S. into a police state, even if the facade of a republic democracy may remain.

Combine all of this with Trump’s brazen contempt for the Constitution and reckless stoking of racial and political divisions; and it has the potential to push the nation towards a civil war.

Joe Biden has been a public servant of stellar record since 1973!

Under the circumstances, his opponent need not be anything more than just a decent, sane human being to merit our vote. Fortunately for Americans, the Biden-Harris team is much more than just that.
They are the “responsible adult” to the petulant “child” that currently occupies the White House. Both Joe Biden and Kamala Harris are caring and conscientious individuals, in contrast to the self-worshiping Trump and the self-serving Mike Pence.

It’s interesting how we insist on experience and track record while hiring even a home contractor, but when it comes to the highest office of the land, so many Americans got seduced by the idea of a political “outsider” like Trump. But as Trump has demonstrated, a President with no qualifications, experience, or character can be damaging to our nation and to our lives.

In contrast, Biden has been serving in the Senate since 1973 when he was just 29 years of age. He has been chairman of the Senate Committee on the Judiciary as well as the Foreign Relations Committee—besides his eight years as Vice President. At close to 50 years of public service, Biden is a seasoned and accomplished man perfectly suited for the White House.

It is no surprise then that Republicans, in failing to question Biden’s stellar track record, are resorting to spreading propaganda videos of Biden’s so-called senile moments. Unfortunately for them, all it does is bring to mind the letter that over 350 psychiatrists and other mental health professionals have signed to Congress stating that as per their professional judgement, “Donald Trump manifests a serious mental illness that renders him psychologically incapable of competently discharging the duties of President of the United States.”

The fact remains that both candidates are higher up in age compared to the young presidents we have had in recent times. If age related competency is a concern, it is important to consider that Biden, as an “adult” and as an experienced public servant, is capable of building a competent team around him and actually taking their expert opinions into consideration. Trump, on the other hand, has demonstrated time and again that he not only doesn’t consider sound advice, but also routinely accuses and insults experts from his own administration, making his compromised mental health apparent, and downright dangerous to the wellbeing of Americans.

Despite the efforts of some right-wing Indian-American groups to paint Biden as anti-Indian, and Trump as a chum of Modi and India, the reality is precisely the opposite of the media optics. Trump was smitten with Modi when the latter endorsed him in front of a crowd of 50,000 during the “Howdy Modi” event in Houston last year. Not surprisingly, Trump has flattered groups like “Hindus for Trump” and has offered sound-bites proclaiming his love for India.

But what the gullible Indians belonging to these groups don’t realize is that Trump’s sweet talking is usually followed by backstabbing. Let’s not forget that all his proclaimed love for India and Indian-Americans didn’t prevent him from stripping India of its special trade status last year. Nor does it prevent him from waging a broader trade war with India by levying heavy tariffs on India’s exports to the U.S.

Way back when Trump was busy gleefully yelling “You are fired!” on his reality TV show, Biden was busy creating an actual track record of being a friend to India. In 2005, as the top Democrat in the Foreign Relations Committee, Biden played a major role in getting the Hyde Act approved by the Senate, which paved the way for the historic India-US Civil Nuclear Agreement. “If the U.S. and India became partners, the world would be safer,” Biden had said at the time. Furthermore, according to former US Ambassador to India Richard Verma, “there is no question” that Biden would help India get a permanent seat on the United Nations Security Council.

In a recent briefing on the occasion of India’s Independence Day, Biden said his administration will stand with India to counter any threat it may face in the region or along its borders. He also backed India’s no-tolerance approach to cross-border terrorism. Unlike Trump’s empty gestures of love and friendship for India, the Biden-Harris ticket has actually articulated policy positions that favor Indian-Americans. A section on his campaign website titled, “Joe Biden’s Agenda for the Indian American Community” pledges that Biden will ensure that South Asian Americans are represented in his administration. “Our government will reflect the diversity of the United States, and Indian American voices will be included in shaping the policies that impact their communities.” The section goes on to list several policy platforms that affect Indian-Americans, including public-private investments to boost small businesses, increasing the number of permanent work-based visas, and many more.

More so than our lives as Indian-Americans, it is our lives as American citizens that are at stake this November. An incumbent train wreck versus a sane, qualified, and experienced challenger: the choice can’t be any starker.