The Kashmir Conundrum Is Now a Hornet’s Nest 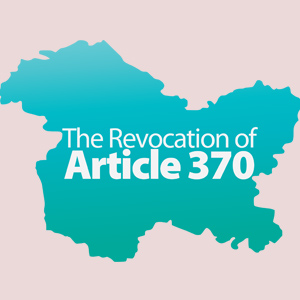 Ever since the Modi government’s sneaky and shocking announcement on August 6, 2019, of revoking Article 370 of the Indian Constitution—which offered a special semi-autonomous status to Kashmir in light of the extremely messy and hurried accession of the state to India in 1947—the entire population of India, it seems, has become experts on Kashmir and Article 370. Ugly social media fights have broken out; families stand divided in heated debates in WhatsApp groups. Social media arm-chair experts are on overdrive thrusting their opinions with total disregard to the fact that Kashmir may perhaps be one of the most layered of the world’s current geopolitical issues.

The Indian media, especially the broadcast media, which seems perpetually on steroids, has lit up even more with all kinds of “pundits” out-shouting each other, frantically trying to project their view as the only ironclad perspective on this highly intertwined situation. More gravely, the rift between India’s already polarized left and right political wings has further widened. Rape and death threats targeting those who dare to challenge the nationalist right-wingers, along with propaganda that is spreading like wild fire, have greatly fouled India’s public discourse, which should actually be serving as a valuable function of a healthy democracy.

With a potentially tumultuous issue such as Kashmir, more restraint rather than bravado is called for. Ever since India’s independence, the region has been an extremely convoluted conundrum. It’s a conflict with multiple native stakeholders, not to mention the nation-states that have staked a claim on chunks of this land. While Pakistan has no historical, moral, or legal standing to claim any part of Kashmir, the fact is that a good number of Kashmiris see it as an ally, thanks to its devious manipulation of religious fervor, but also abetted by India’s heavy-handed military subjugation of Kashmiris.

But when it comes to India’s approach towards Kashmir, ultimately the only factor that matters is, where do Kashmiris themselves stand? Which sentiments are stronger and more widespread: pro-India or anti-India?

When we don’t respect these sentiments of the very people at the heart of the matter and try to forcefully impose our will upon them, we stoke pent-up frustration, resentment, and anger that can lead to a massive backlash, and provide fertile ground for breeding terrorism—a far cry from the rosy picture painted by the Modi government, of a smoothly integrated state that will prosper from investments flooding into it, and a population that will suddenly embrace an Indian identity and live happily ever after.

It is ironical that Gujaratis, Maharashtrians, Biharis, and the many other regional ethnicities of India now feel like they have mandate to dictate—through their democratically elected government, albeit—the lives of Kashmiris, Gujjars, Bakarwals, Paharis, Dogras and Ladakhis—the ethnicities of Jammu, Kashmir, and Ladakh—even though most of them don’t have the foggiest idea of the aspirations and daily realities of these various Kashmiri ethnicities.

This total disregard of taking Kashmiris themselves into account comes from the fact that Indians have always seen it as an integral part of India. I, too, grew up with never an iota of doubt about Kashmir being part of India. “Kashmir se Kanyakumari” (“From Kashmir to Kanyakumari”) was an often repeated catchphrase to denote the longitudinal extent of India. Visiting Kashmir required no passport. In fact Indians took veritable pride in the fact that this “Paradise on Earth” belonged to India.

Meanwhile though, most Indians were blind to the changing political winds in Kashmir beginning in the 1990s. Fractured into three parts, their loyalties divided between India, Pakistan, and an independent Kashmir, coupled with a rising militant Islamism exported by rogue elements in Pakistan, Kashmiris increasingly saw India with distrust. The subsequent rise of Hindutva in India following the lawless demolition of Babri Masjid in 1992, put further fuel in the fire of simmering communal sentiments in the subcontinent.

Thus, the reality within Kashmir changed, but the Indian mindset that Kashmir was an integral part of India is so deeply embedded amongst Indians, that it continues to be the overriding principal that shapes India’s outlook towards it. And now, in an India dominated by hard right elements, taking Kashmir has become a matter of pride. For many in the BJP-RSS-Sangh Parivar camp, who perhaps fancy themselves having “56-inches chests,” claiming Kashmir as an integral part of India has become a war cry.

This sense of entitlement rests largely on the fact of the historical Hindu roots of Kashmir. Hindus, the original inhabitants of the region, have had a 5,000-year-old legacy in Kashmir. The ethos of the region was likely similar to Hindu kingdoms in the rest of what was referred to as “Bharatvarsha.” From a historical standpoint, viewing Kashmir as an integral part of India is far more accurate than any other narrative.

But then history is … well, history. Historically, India itself was a Hindu land. But today, at least as a political entity, it is not—it is a secular nation, and far the better for it, notwithstanding the assaults on its secularism in recent times. Unless one conflates religion with nation—which would be going against the Indian Constitution that has asserted India as a secular nation—the historic Hindu heritage of Kashmir cannot be a legitimate argument for India’s claim on Kashmir. As depressing and rude as this may seem to most Indians, considering the current populace of the region, and their outlook towards India, can be the only foundation that can provide sustainable, constructive solutions. The alternative of imposing on the Kashmiri people by force is simply not a tenable long-term solution.

At the time of this writing, we were over two weeks into India’s oppressive, tight vise over Kashmir. Even if revoking Article 370 was the right way forward, doing so in such a sneaky, unilateral, and heavy-handed way is more likely to result in the exact opposite of what the Modi government set out to do. Flooding the region with a massive military showdown, arresting Kashmiri leaders, cutting off the Kashmiri people from the rest of the world with a total communication blackout, disrupting their daily lives to where they can’t reach out for help even in medical emergencies … these are surely not actions that bode well for India’s aspiration to bring Kashmir back to its fold. In fact, it plays into the oft-repeated accusation that India wants Kashmir but not the Kashmiri people. Such an occupation that will require perpetual heavy military presence will only further alienate Kashmiris from India, rather than integrate them with it.

In the current dominant mood of the nation, it is unlikely to happen, but India and Indians must take a deep introspective look at their deeply cherished claim over Kashmir. Even if we are historically right, today’s decisions have to be made on today’s realities. Not doing so is a surefire prescription for falling flat on your face.

Whether one likes Pandit Jawaharlal Nehru or not—and the Hindu right most certainly don’t—here was a man who understood the futility of brute force. Despite being a Kashmiri Pandit himself, he had the wisdom and foresight to understand that the only enduring solution to this labyrinthine quandary was to approach it pragmatically rather than with a sentimental sense of entitlement. Based on that, he repeatedly promised plebiscite to the Kashmiri people for their self-determination in various official and unofficial settings.

One may ask where was this concern for propriety when the Kashmiri Pandits were driven out of their ancestral homeland in the recent past? Indeed, that is perhaps the most tragic chapter of Kashmir’s history. My heart goes out to displaced Kashmiri Pandits, many of whom lost their loved ones during the exodus from atrocities committed by militant Islamists. I am at a loss as to why the Central government of the time did not crack down heavily on Kashmir to prevent this exodus. That would have been the proper time and the right reason to do so.

But history is littered with such wrongs that cannot be righted by a tit-for-tat approach. Moreover, there is no parity in how radical militants conduct themselves in an environment of civil unrest (which is what caused the exodus of Kashmiri Pundits) and how the world’s largest democracy conducts itself. Working towards some form of plebiscite or referendum is the only constructive way forward for Kashmir, and the only one that would validate and strengthen India’s stature as the world’s largest democracy. A forceful occupation would prove India’s democracy a sham, and may well ensnare us in an Israel-Palestine sort of stalemate for decades to come—a hornet’s nest that may at best drain significant resources, and at worst become a perpetual violent conflict.

For another, divergent perspective to this editorial, please see the article appearing prior to this in the current print/digital issue. Comments? Please write to letters@khabar.com.