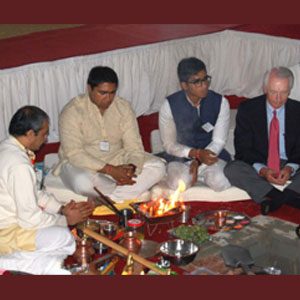 “He’s sitting down there with his legs crossed, participating in Hindu prayers with a dot on his forehead with incense burning around him. I don’t know what the man was thinking.”

These were the unsophisticated words of Kentucky State Senator David L. Williams in criticizing his political rival, Steve Beshear, the governor of Kentucky, for his participation in a Hindu bhoomi-pujan (groundbreaking) ceremony for the inauguration of a manufacturing plant started by an Indian-owned company in Elizabethtown, Kentucky. Here’s a company that is bringing an investment of $180 million as well as 250 jobs in the senator’s state. But that didn’t matter to him; what mattered to Senator Williams was that Governor Beshear was committing “idolatry” by participating in a “polytheistic” ceremony worshiping “false gods.”

Williams’ clumsy criticism reveals an ugly parochialism that continues to hound America even at a time when this nation has put the splitting of an atom behind it and is experimenting with cloning human beings.

It’s not just that the likes of Williams associate with divinity only when they are seated on pews in a church, but that they cannot fathom a world outside their own limited upbringing, background and experience. His parochial fervor was amply on display when he went on to say that as a Christian, he would not participate in Jewish, Muslim or Hindu prayers, and hoped Hindus would open their eyes and “receive Jesus Christ as their personal savior.”

Such narrow-mindedness is sad enough for a roadside Bible-thumper. But when it is gratuitously indulged in by an elected representative in one of the most diverse countries on the planet, it is downright appalling. How can one stand in judgment of the divinity of another by reducing the majestic diversity of close to seven billion individuals and a human history of more than 5000 years to a single filter such as “Have you accepted Jesus Christ as your personal savior?”

This is certainly not to disrespect Christ, a truly unparalleled incarnation of the divine, and those who seek salvation in him, but rather to question the fundamentalists who can’t see themselves as true believers if they also don’t regard others as heathens. This unfortunate straightjacket that fundamentalists have imposed upon themselves is responsible for the continued cluelessness by Senator Williams on this issue. In his attempt at damage control, he only dug the hole deeper for himself by saying, “I can’t see how anyone could object to the fact that if I believe that, that I pray for them to have salvation. I don’t see how that could offend anyone.”

To be so utterly careless about the sentiments, backgrounds, histories, and experiences of others qualifies as the textbook definition of myopia. And so we have the hilarious debacle of political theater where it is Senator Williams who has the temerity to wonder about Governor Beshear, “I don’t know what the man was thinking”!

This ignorant insult of Hinduism by an American elected representative is certainly the main crime in this unfortunate episode. However, there is another subtler subtext here that has more to do with Hindu Americans than with ignorant legislators. It has to do with the tendency of exhibitionism that some zealous Hindus suffer from. They, too, are parochially smitten by the glory of their ancient religion and can’t wait to show it off every chance they get—without any consideration to compatibility or interest on the part of those whom they want to impress or build relationships with.

I have been to many havans, yagnas, and similar ceremonies where non-Hindu guests were subjected to highly orthodox rites and rituals that didn’t hold any meaning or significance for them—and have seen the resulting squirms of boredom, discomfort, and anguish. Wanting to forge connections with the mainstream establishment is a reasonable goal, but being inconsiderate and insensitive about cultural compatibilities in doing so is not good PR for Hinduism—despite what the resulting photo-ops and media headlines might suggest.

Take for example, the bhoomi-poojan ceremony attended by Governor Beshear. Was it really necessary to impose upon the executive head of the state of Kentucky an hour-long ceremony where he was required to sit cross-legged in front of a fire? Would the gods be pleased if—and only if—Governor Beshear sat through the full hour of the ceremony?

Indians who have grown-up with the practice of sitting cross-legged on the floor fail to appreciate the discomfort it amounts to for those not used to it. Atithi devo bhava (“The guest is God”) is a uniquely Indian philosophy rooted in its Hindu traditions, but this sentiment is often sorely missing in such situations where Hindu hosts seem more concerned about PR brownie points rather than the comfort (physical and cultural) of their American guests. For example, these guests can be forgiven for thinking of the mantras and chanting at such ceremonies as foreign-sounding mumbo-jumbo. And hence it seems particularly insensitive to impose such duress on invited guests for any length of time longer than necessary to establish a symbolic presence of the guests.

Sure, like Governor Beshear, many politicians and other dignitaries participate in these events with as much grace as they can muster because, for one, they don’t have much choice—usually they are drawn into it without adequate notice of the proceedings. Even where they are aware of what to expect, they play along as they are often keen on establishing relationships with the diverse set of their constituents. Add to it the enticement of jobs and investment in their territory and it becomes hard for them to reject such advances. And so what are supposed to be divine ceremonies end up becoming crass transactions of mutual appeasement.

Today we have American kirtan groups who sing devotional bhajans with joy in the bhakti tradition, we have American Vedantic scholars who are stronger proponents of India’s spiritual wisdom than many born Hindus, and we have legions of young Americans who were born non-Hindus but are flocking to organizations like the Art of Living Foundation, Isha Foundation, Vedanta Centers, and many other organizations that derive from the Hindu roots of India. These are all beautiful examples of a natural, unforced flow of Hinduism into America—not one that is imposed upon unfortunate guests who find themselves squirming in painful positions through hour-long unfamiliar rituals in an unknown, ancient tongue.