A Noble Lama for the Global Era 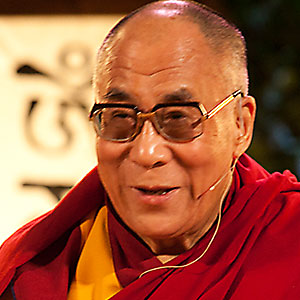 The Fourteenth Dalai Lama, who won the Nobel Peace Prize in 1989, was in Atlanta on his second visit—the first was in 2007—for a packed three-day program at Emory University, where the 75-year-old Buddhist monk holds the title of Presidential Distinguished Professor. The tag Noble Lama may seem a tad casual when applied to the Dalai Lama. But though he is referred to as His Holiness, there is no stuffiness around him, as it quickly became clear at Emory’s press conference, which Khabar attended.

“I’m just going to say [I’m a] Hopeless Professor!” he said, with a burst of spontaneous laughter that’s so distinctive.

As the swarms of people attending Emory’s sold-out events demonstrated, the Dalai Lama is indeed an esteemed global icon, representing the ideals, hopes and dreams of not just Tibetans, to whom he is much more than a religious and political leader, but also countless other spiritual seekers. Few people anywhere are held in such high regard.

At the press conference, it was striking to note the Dalai Lama’s famed personal touch and his deep attachment to India, where he has lived twice as long as he did in Tibet, which he fled in 1959 when Chinese soldiers occupied the land. While mingling with the journalists, briefly, His Holiness asked me, “Are you from India?” and went on to make a couple of related inquries.

The Emory-Tibet Science Initiative (ETSI) was established three years ago, and the pilot program, which involves 90 monks and nuns, has two more years to go. While most of them are based in India, Emory currently has six student monks from Dharamsala.

Following his opening remarks, Emory President James Wagner, who accompanied the Dalai Lama, presented him with four new science books, with the English text on one side and the Tibetan translation on the opposite page. The objective of this initiative—which the new textbooks will facilitate—is to make science training a permanent part of the monastic curriculum in India. In addition to shaping the ETSI’s biology, physics, math and neuroscience programs, Emory scholars teach in Dharamsala every summer.

One such participant is long-time Atlantan P.V. Rao, an associate professor of physics at Emory. He first went to Dharamsala in 2007 to teach elementary particle physics; in 2008, he delivered a lecture in cosmology at the inauguration of the Emory-Tibet Science Partnership in India. Professor Rao is now involved in preparing the science reading material for the monastic curriculum.

Though nuclear physics represented one of the glories of human civilization, the Dalai Lama noted how this “great achievement became destructive” when nuclear weapons were used against Japan in World War II. “Unless we make some sort of special effort to try to bring inner peace in the human mind—[which can be] full of anger, full of hatred—the scientific achievement can be destructive,” he said, adding that while “moral ethics” can be understood in a religious sense, it’s important to recognize the secular approach.

“India’s constitution is based on secularism,” His Holiness pointed out. “Secularism doesn’t mean disrespect of religion, but rather respect of all religions and also respect of non-believers. So, I try to promote human values secularly—and, of course, the religious way is always there.”

That brings us to a dimension in which Emory is expected to play a crucial role, along with Indiana University-Bloomington and the University of Wisconsin-Madison. “Now we need another way, and here scientific findings are extremely important,” the Dalai Lama said. Referring to the recent advances in neuroscience and research on compassion, which is “extremely useful for the society, for the family,” he added that it would appeal to secular-minded people. “In the past, modern science focused mainly on external matter. Scientists must now investigate their own mind…give it 100 percent.” Further investigations could give us a better idea about “emotion, mind and prayer” and make major contributions to our well-being, he noted.

Like his interest in religion, the Dalai Lama’s fascination with science can be traced to his boyhood years in Tibet, where he used to tinker with gadgets. But his keen desire to build mutually beneficial bridges between the two is a more recent development, prompted by human advances and also, one might say, by setbacks in human relations.

“The Dalai Lama, in fact, seemed to be stressing science more and more as the twenty-first century began, perhaps because—again—it offered to take us out of a domain where one side of the world used the Koran to justify terrible acts of violence, while another side used the Bible,” writes Pico Iyer in The Open Road: The Global Journey of the Fourteenth Dalai Lama. “The ‘essencelessness’ that quantum mechanics stresses, Heisenberg’s uncertainty principle, the very way relativity and quantum mechanics dissolve the separation of subject and object—all were ideas he felt should be intrinsic to a Tibetan monastic curriculum.” Iyer adds, “In a curious way, in fact, globalism was supporting some of the principles of Buddhism, as much as the other way round.”

That emphasis on science—or rather, the impact of science on spirituality—was very much in evidence at the conference on compassion meditation, held on the second day in the capacious Woodruff Physical Education Center. In the morning, the participants included primatologist and ethologist Frans de Waal, neuroscientist Richard Davidson, psychologists Barbara Fredrickson and Philippe Goldin, and moderator Daniel Goleman, a best-selling author who focuses on emotional and social intelligence.

Emory researcher de Waal, in his presentation, noted how empathy—which is based on synchronization and motor mimicry—is to a certain extent innate and is found even in animals like chimpanzees. However, to translate this empathy into compassion and altruistic behavior, humans have to engage in a deeper cognitive process. And that takes us to Davidson’s findings on compassion meditation at the University of Wisconsin-Madison, where he saw that experienced practitioners displayed more compassion and altruistic behavior than novice practitioners. Davidson found that it’s because there is a change in the activity of the amygdala, a set of nuclei in the brain, which controls fear and anxiety. Next, Fredrickson touched on her study of Loving Kindness Meditation (LKM), which boosts what she called the vagal tone of the longest cranial nerve (vagus). Also known as emotional meditation, LKM is similar to compassion meditation and tests show that it builds cardiovascular resources and improves mental health. Goldin emphasized the psychological effects of compassion cultivation training (CCT). An eight-week CCT program has show that, by suppressing social anxiety and boosting social emotion, participants become more caring and helpful.

In the freewheeling discussion that accompanied these presentations, the Dalai Lama made a distinction between “wish” and “willingness”—with the latter being a higher level of compassion, since you’re doing something about the suffering you encounter. Compassion, moreover, isn’t only about responding to evident suffering, he said. Another kind of compassion focuses on how to prevent further pain.

On the first day, His Holiness gave a talk titled “The Nature and Practice of Compassion” and took part in an interfaith dialogue on happiness. On the third day, in the final session, the Dalai Lama engaged with actor Richard Gere and author Alice Walker in a free-flowing discussion on creativity. These were just a couple of the questions they addressed: Do the arts have a special role in promoting compassion? What role does ego play in art?

Both Gere and Walker took issue with the long-held Western belief that one needs to be tormented to produce art. They concurred with the Buddhist view that, as Gere put it, “Great art comes from a place of balance.”

While the lack of political freedom can suppress creativity, it was pointed out how, paradoxically, the converse could also be true, as it was in some communist regimes. Repression—and here there was a reference to what Nelson Mandela, among others, endured—“can lead to freedom from delusions, falseness, anger, ignorance, hatred.” Physical freedom can be lacking, in other words, but “there is inner liberation.”

It wouldn’t be easy to sum up the Dalai Lama’s philosophy in a few sentences, but one could perhaps convey an important aspect of it with a single quote from this last session. “A lot of problems we’re facing [today] is not due to lack of material development, but due to lack of internal development,” His Holiness said.

And it’s a message that Pico Iyer reiterates, in his clear-eyed account, to show why the Dalai Lama—with his immense warmth and intense charisma—appeals to so many people from diverse traditions around the world. “A Buddhist talks not so much about good and evil as about ignorance and awakening; in that sense, he brings all responsibility inward, so as not to waste time blaming people outside himself, but to see how he can better understand (and therefore solve) the problem within,” Iyer writes.

The Dalai Lama’s affinity for India is understandable, given the spiritual connection. Besides, it was Prime Minister Nehru who extended a welcome and asked him to settle in Dharamsala, where His Holiness kept the idea of Tibet alive and presided over a five-decade efflorescence of its culture. But India is also greatly indebted because, in a sense, it was the Dalai Lama who brought Buddhism back to the land in which it originated.