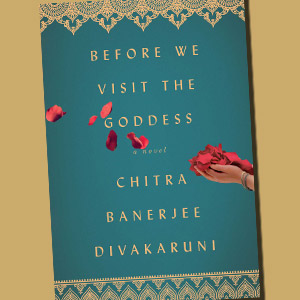 Chitra Banerjee Divakaruni’s Before We Visit the Goddess (Simon & Schuster), her evocative new work exploring disjointed relationships, has been described as an Indian Jane Austen novel. Though the 208-page novel could be longer, notes reviewer ANJALI ENJETI, it does masterfully depict how the secrets of one generation haunt and intensify in the next, confirming Divakaruni’s status as a first-rate intergenerational storyteller.

Confession: It’s hard for me to be objective about the fiction of Chitra Banerjee Divakaruni.

I spent my school years in Michigan and Tennessee devouring British and American classics like Little Women, To Kill a Mockingbird, Pride and Prejudice, Wuthering Heights,and Silas Marner. Late at night, in the dim light of a unicorn lamp, I turned to Tales of a Fourth Grade Nothing, Harriet the Spy, Nancy Drew, books from the Choose Your Own Adventure series, and Gone with the Wind.

I’d not questioned the fact that not a single character in a single book resembled me. Their skin was “ivory,” “like snow,” “incandescent.” Having been raised almost exclusively on white European and American literature, (with very rare exceptions like Alice Walker’s The Color Purple or Harriet Beecher Stowe’s Uncle Tom’s Cabin), I’d assumed that no one sharing my heritage wrote fiction with the kind of skill that warranted its inclusion on junior highand high school syllabi.

After I finished school and embarked on a career, I finally had time to read again. This time, I explored works by writers who looked like me, who shared a history rooted in the subcontinent. These writers included Chitra Banerjee Divakaruni, Bharati Mukherjee, and Anita Desai, the first wave of South Asian immigrant authors. Thus, it’s difficult for me to separate my joyous experience of reading, for example, Divakaruni’s Mistress of Spices, from the content of the book itself.

Still, Divakaruni’s latest novel, Before We Visit the Goddess, merits a review beyond my nostalgia—for the author is a seasoned novelist, with a honed instinct for how to spin a tale, move effortlessly through generations, and skip seamlessly between continents.

Divakaruni opens in the year 1995 in a village in Bengal, where 67-year-old Sabitri, founder of the sweet shop Durga Sweets (named after her mother) receives a distressing call from her only child, Bela, who lives in Houston. Bela begs Sabitri to write a letter to Tara, Sabitri’s only grandchild, who has suddenly decided to drop out of college. Immediately, we sense a family’s disconnection that spans years and oceans beyond this solitary phone call. For Sabitri has never actually met her granddaughter Tara, and Sabitri’s relationship with her own daughter Bela feels strained. As Sabitri dutifully pens a letter to Tara, she reflects on her rise from a poor village girl to a rich corporate wife, the cracks in her marriage, her widowhood, and raising a child as a single mother and entrepreneur.

The novel then shifts to the storylines of Bela, Tara, Bipin Bihari, the manager of Durga Sweets, and a few other minor characters. For the most part, the diverse points of view add layers and complexity to the psyche of the major characters. Take, for example, Dr. Venkatachalapathi, a grieving father whose observations about Tara shed much needed light on Tara’s struggles to attain a stable career and a solid romantic relationship. Sometimes, though, the shifts feel disjointed. When Bela moves to a new city and rebuilds her life after her divorce, her rebirth as a single woman is told from her new neighbor Kenneth’s point of view. The fragility of Bela’s recovery, her Herculean efforts to become solvent after financial ruin, her struggles with alcohol and loneliness, would have felt more intimate, more urgent, if expressed in her own voice.

Not all of the characters in Before are equally well drawn. Sabitri is fresh, complicated, and regretful. Her personality leaps off the page. Bela is self-absorbed, whiny, cunning. She seems almost too unaffected by the tragedies of her life. Tara’s decision to drop out of college is the thrust of the novel, but her decisions afterward at times seem inexplicable. Before is a slim 208 pages. Another hundred pages would have fully fleshed out their conflicts and motivations.

These shortcomings are forgivable, though, as Divakaruni more than makes up for them on other fronts. Her language is lush, evocative. There are “sheets of rain blotting out the world.” When Sabitri is finally given the chance to attend school: “A lifetime’s worth of impatience, days slow as cattle grazing in a parched summer field.” The author’s insight into the human psyche is sharp and devastating. “This, this was happiness: the lightening carving its signature into the belly of a cloud; the little birds in the kadam tree, scattering yellow pollen as they puffed their feathers.”