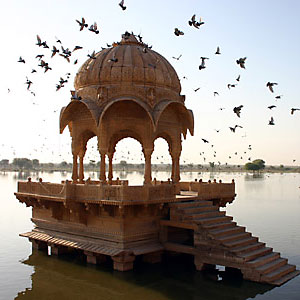 Before my wife and I visited the region of Rajasthan once known as the princely state of Mewar, I had carefully studied Colonel James Tod’s Annals and Antiquities of Rajasthan, first published in London in 1829. Tod had served several years as the East India Company’s Resident in Udaipur, capital of Mewar, and scholars have long accepted it as a most useful and reliable work. I had studied it meticulously to prepare myself for the writing of a novel based on the Rajput legend of Padmini, the queen whose great beauty supposedly spurred Ala’ud-Din Khilji in 1303 to attack Chittorgarh.

In describing the region around Udaipur, Tod frequently uses the adjective “alpine.” For example, he writes, “Whoever has travelled through the Oberlaadi [sic] of Meyringen, in the Oberland Bernois, requires no description of the alpine Aravalli. The Col de Balme, in the vale of Chamonix, is, on a larger scale, the Haldighat of Mewar.”

Now, my wife Mary Ann and I have visited the region around Meyringen and the Oberland Bernois—several times. We lived for a number of years in Lyon, France, and frequently drove over into Switzerland, then drove all around from Geneva to the Liechtenstein border. With our heads and hearts full of expectations of soaring, snow-capped, and glacier-mantled peaks aroused by such comments, we also drove around Udaipur in a hired car. We can now attest to the fact that there is no resemblance whatsoever between the Aravalli hills around Udaipur (miserable little, scrub-speckled sand-dunes) and the Oberland Bernois with its glaciers spilling down such snow-capped giants as the Monck (13,347 feet), the Eiger (12,902 feet), and the Jungfrau (13,513 feet).
Further, Mary Ann and I have visited the vale of Chamonix, have ridden the téléphérique (the gondola lift) to the top of L’Aiguille du Midi, and seen the panoramic view that includes the entire western side of the Massif du Mont Blanc. To assert any resemblance, no matter what the scale, between the Aravalli’s scrubby hills and the Alps, between the Haldighati of Mewar and the Col de Balme, is blasphemous. The only thing the latter two have in common is that they are passes. But, still, what a difference!
The Haldighati is not much more than a bulldozer cut through a low ridge, the sides some 40 or 50 feet high, the whole apparently widened in modern times to accommodate the tarmac of NH8. A téléphérique from the village of Le Tour at the upper end of the vale of Chamonix takes you to the col or “pass” (7,100 feet); from there the visitor gets a sweeping view of the entire vale with snow-bedecked granite spires in all directions, all higher than 12,000 feet: Les Aiguilles de Chamonix to the east and Les Aiguilles Rouges to the west (l’aiguille in French means “needle”). After seeing it, and after seeing the Haldighati, one has to ask: what did the good colonel put in his hookah?

The curious thing is that Udaipur needs no exaggerations. The city, its palaces, LakePichola are all worthy of the visitor’s admiration even if the expectations raised by Tod are doomed to disappointment. Everyone talks about the Jag Niwas, the Lake Palace Hotel, how it seems to float on the surface of Lake Pichola (an artificial lake), how presumably it became a hotel at the suggestion of Jacqueline Kennedy. And it is, indeed, an engaging sight, although, I must confess that when we saw it, it seemed closer to sinking, for the recently ended monsoon rains had been more than generous, and the lake level had risen to such an extent that it had flooded the boat landing and the lobby with six to eight inches of water. You got from the launch to the reception desk on raised wooden walkways (shades of Venice!).

When we arrived, we decided to have a before-dinner drink, this in a small, grassy courtyard two or three steps up from the level of the lobby and along the corridor to the dining room. We made our way in, and, whether it was the excessive water or just the natural order of things, every motion roused from the grass a veritable cloud of mosquitoes, and not just anybody’s old mosquitoes. These rose from their lairs with a whine of wings that rivaled the revving of a jet engine, punctuated with a fearsome gnashing of voracious beaks. With my crutches, I fended them off as best I could, covering our retreat to a more congenial spot, a near-by paved court. As I did so, I realized I had at last found the secret to the Mewari Rajputs’ legendary skill with those straight, double-edged swords called khandas, their favorite weapon. Imagine a stalwart Rajput warrior in full chain-mail armor with shield and khanda, his back against a wall, facing a horde of these monsters, thrusting, parrying, slashing, as those vicious beaks thrust toward this chink and that, and you will immediately understand what I mean. Anyone who daily practices his dueling skills by fighting such mosquitoes with such a weapon will surely be legendary in both skill and might. Indeed, one could rightly call such men the bravest of the brave. Heaven help him, though, if one of those mosquitoes gets under his chain-mail shirt. How on earth would he scratch?

The other lake palace, the Jag Mandir, is the more delightful, the more graceful of the two, and the more interesting to visit not only because of the architecture but also because of the gardens, the latter sorely lacking at the Jag Niwas. It lies about two-thirds of a mile south of the Lake Palace and figures as one of the attractions on the regular lake tours that leave from the jetty on the eastern shore in front of the City Palace. In 1622, receiving asylum following an abortive revolt against his father, Emperor Jahangir, Prince Khurram lived here for a while. Later, on his father’s death, he won the Delhi throne and took the name Shah Jahan. The fact that he sought shelter from his father’s wrath at Udaipur says something about the respect the Mughals had for Mewar’s might.
The City Palace is an imposing sight especially when seen from the lake, a huge white bulk that sprawls along the waterfront and towers to an impressive height above everything else in sight. Built in successive stages on the hill called Moti Magri (Pearl Hill) on the eastern shore of Lake Pichola, it began as a small pleasure palace built in the late sixteenth century by Maharana Udai Singh, whose name, of course, provides the name of the town.

Since then subsequent maharanas have added some 13 or 14 other mahals and halls and temples, the whole surrounded by a crenellated and turreted wall. By this process of accretion, the City Palace became the largest palace in all Rajasthan, a region renowned for large palaces.

The descendants of the royal family of Mewar have converted several of the buildings within the walls into museums, most notably the Krishna Vilas with its Rajput miniatures; the Mor Chowk with its colored glass mosaics of peacocks, and the Lakshmi Vilas Chowk, an art gallery with a collection of paintings by Rajput artists, But in truth the whole complex within the walls is a work of art, for it is all resplendent inside and out with mosaic work—floors, walls, ceilings—in colored tile or colored glass.

I must confess, though, that despite the riches inside the City Palace, I found more to interest me in the numerous murals we saw around in the city. Rajasthani painting is justly famed, but here in Udaipur it reaches its height not within the City Palace but on various walls throughout the city. Customarily the owners of the havelis and other lesser buildings decorate their exterior walls with magnificent depictions of processions, cavalcades, ceremonies, dancing men and women, and other scenes.

Some of these folk-paintings, done in a style almost unique to the genre, rise easily to the level of masterpiece although, like those who construct the images for Calcutta’s Durga Puja, the artists who paint them are largely unknown and unsung. What most took my eye were both the vivid colors and the sometimes cubistic treatment of highlight and shadow. For example, in the “rounding” of an elephant’s leg, the artist will juxtapose along the leg two parallel bands of dark and light color with no transitional blending between the two, an unusual but very effective “hard-edge” technique.

Following the advice of a friend, on our last day in Udaipur we visited the Saheliyon-ki-Bari, a beautiful garden in the northern part of the city, and there I saw the most memorable sight of our visit: a little girl, about two and a half years old, in a gauzy pink Rajputni costume. Shrieking with glee, she dashed on chubby, wobbly legs in and out of the spray from one of the fountains, after each foray looking toward her mother (also in pink) for signs of approval or disapproval. Receiving a smile, she would repeat the maneuver.

On one of her flights from the spray, she almost collided with my wheelchair. A word of caution from me, and she stopped, turned, and looked me squarely in the eye then looked up at Mary Ann, not with fear but wonderment. Two people with something other than the regulation black hair and brown eyes—“O, brave new world that has such people in it!” Through that little girl’s expression at that moment, I got a heady glimpse of something I had come close to forgetting, something I had often seen when our child was that age: the sheer magic of the world in which we live. At her mother’s word of encouragement, she gave Mary Ann and me a tentative smile and even sidled a little closer. After some unsuccessful cajolery to bring her closer, I raised my camera to my eye. Before I could focus, she flew; not out of fear, not she, a Rajputni, but, like the fountain that so fascinated her, out of the sheer inability to stand still.

In my mind’s eye I still see her with that broad look of wonderment on her face, hung for a breathless moment between flight and attraction, this best of all my memories of India. Hail to thee, blithe spirit!