Americana: Americans Are… What? 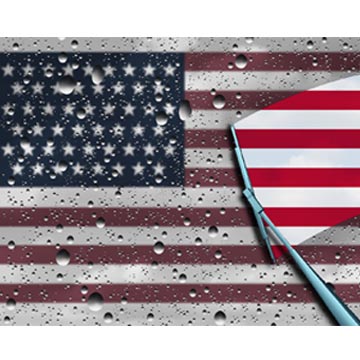 The Truth beyond the Stereotypes

Some love me, no matter what I do. Some hate me, despite what I do.

Most think I am hopelessly optimistic. I am ignorant of world affairs, an angry and violent person who just itches to fire an AK-47. I am overly religious. And when I am not brimming with optimism, polishing my gun collection, or bending my knee during Sunday worship, I buy more stuff than I need, placing it all in my oversized home.

I am an American.

In the past few months I have been studying what others in the world think of Americans, and why. Are their perceptions fair and accurate, or no more reliable than a Donald Trump tweet? What are the origins of these perceptions? Let us first consider one of the most unique American characteristics, optimism.

Assume that you are in a raft in the middle of the ocean. You are running out of food and the sharks are close. Who would you want as your companion? Yes, of course, you would want an American! Among all of the world’s people, we are the most likely to say, “Things may look tough at the moment, but I know I can get us out of this mess!” Consider the following vignette from BBC America:

One thing Brits notice about Americans is their eternal optimism; there’s nothing that can’t be done…True story—years ago I was on a girls’ weekend in Boston and as usual, we were running late (this time for the Duck Tour). Half our group was English and the other half American and the attitude towards trying to make the Duck Tour was hilarious. Brits: “There’s no point in running, it’ll have gone by now.” Americans: “No, let’s just run and see.” And sure enough…we had more than enough time.

Since our founding, ours has been an optimistic land. The notion that our success is up to us and that rewards will follow is so ingrained in our culture that even bad economies and horrible presidents cannot kill this American belief. And for the most part in our history, it has been true. Even our next generation of leaders, the oft-maligned Millennials, are the most optimistic of all. According to Pew Research, nearly half of them believe our country’s greatest years are ahead. No other generation has come close to expressing the same confidence in the United States, including my own.

After a day of skiing in the Austrian Alps, I returned to the inn and spotted two beautiful women sitting next to a warming fire. May I join you? Yes. Where are you from? We are from Israel. You? America. The conversation is bright and cheerful. An invitation to ski with them was surely a few laughs away. It wasn’t. Here’s why.

When I had signed up for the ski trip, dozens of Georgia Power & Light engineers and a few of their wives had done the same. In less time than it takes to down a Budweiser in the Atlanta airport, I had already made up my mind to ditch the, um, very Georgia group when we arrived in Austria.

Oh, no. Keep walking. They do not. Two engineers plop down next to me. Did someone just flush a toilet or is that the sound of my future prospects being whisked away? The first tells the two women he could not locate Israel on a map. Same with me, the second says, but if you girls could, “Give me the longitude and latitude of your country, I could find it then. I’m good with longitude and latitude.”

The two women stare at the two, then me. Oh, no. Don’t lump me in with the engineers.

“You Americans are so self-centered! You only care about your country! This conversation is insulting!” The women leave. I stare at the engineers.

“Was it something we said?” they wondered.

Sigh. It is true. Americans are quite ignorant of world affairs.

In March 2009, the European Journal of Communication asked citizens of Britain, Denmark, Finland, and the U.S. to answer questions on international affairs. Sixtyeight percent of Danes, 75 percent of Brits, and 76 percent of Finns could identify the Taliban, but only 58 percent of Americans could.

But statistics can be treacherous. Even as the “average Joe” might struggle with world news, our country’s top kids are exceptionally gifted. Our universities are the best in the world. The brightest students from many countries come here to study, work, and often stay.

One reason for our lack of world knowledge is that with our vast natural resources and geographic isolation, we have had fewer historic reasons to understand much beyond our shores. Even when Europe needed our help in the early days of World War II, President Roosevelt delayed intervention, knowing most Americans considered it “Europe’s war.”

Many in the world also believe that we Americans are a uniquely angry and violent people. Is this true?

In 2016, our wealthy country had the thirty-first highest ratio of death by gun violence in the world, a number eight times that of Canada and twenty-seven times that of Denmark. Why the startling gaps?

For starters, our nation’s history began with a war. But unlike European countries where kings and queens had power long before people had a voice, American history is different. The lands west of the Mississippi River have been part of the United States for two centuries, or less. In this once lawless vacuum, people needed guns to protect their families. When government arrived, the people elected to keep their weapons.

Unfortunately, the mass shootings of the past few years, along with the deranged views of the National Rifle Association, have obscured the good news: we are becoming a less violent society.

Pew Research analysis indicates that our nation’s gun death rate has declined by thirty percent since 1993. According to FBI statistics on violent crimes, America is the safest it has been since 1960, the year the FBI began recording data. Perceptions will be slow to change in regards to our gun violence, as they will be with another international perception, American greed.

Those words belong to Donald Trump. They are not historically consistent with who we are as a people or country.

According to the 2014 World Giving Index, Americans are the most generous people in the world. We ranked first in the world at helping strangers, fifth in volunteering time, ninth in donating money. Remember Aleksandr Solzhenitsyn, the Russian dissident who survived the Soviet gulag?

Sure, we Americans are materialistic and consume disproportionate quantities of the earth’s resources; such is the by-product of an economic system that has provided the greatest levels of wealth for more of its people in the history of the world. But our inventions in science, agriculture, and medicine, and the charity with which we have shared our blessings, have benefited all of the world’s people.

Throughout American history, greed, or better, the opportunity to make more money by working harder and smarter, has coexisted with another misunderstood aspect of foreign perceptions, our seeming addiction to religion.

Well, Europe, I am sorry that your religious lives and marketplace are so uninspiring! Ours are not! Welcome to America, a land where we adjust to suit customer’s needs, even in religion! And because we have a vibrant religious marketplace, charity to others is a significant part of American culture. Without the speed bumps of religion and some government regulation, greed would have long ago destroyed the American dream.

So who are we Americans? During my research I came across the following from Zhila Gudzueva, a university lecturer in Moscow:

I think that they are formed by an ideology. There are no Americans as such. Because there is no such ethnicity. But there is an ideology that unites them all.