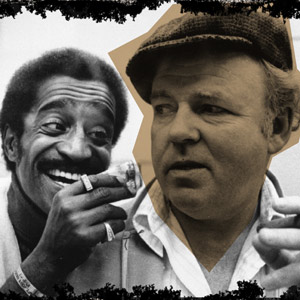 This instrument [television] can teach. It can illuminate; yes, it can even inspire. But it can only do so to the extent that human beings are determined to use it to those ends. Otherwise, it’s nothing but wires and lights in a box.
—Edward R. Murrow

My dad did not much care for the television set. When I was nine years old, he and I watched the 1963 NFL championship game between the Chicago Bears and the New York Giants. The Bears won the game 14-10. Another eight years would pass before we’d watch another television show together but it was worth the wait. It was the first episode of what would become one of the most important and controversial shows in television history, All in the Family.

Dad loved the show. So did Mom. So did most of the country. I did, too, at least at the time.

In 1946 there were just over twenty thousand television sets in the United States. By 1952, there were over fifteen million. Substitute the words “television sets” with “baby boomers” and the numbers nearly match. Mine was the first generation in history to be raised with the television and we began watching at an early age.

Long before Sesame Street there was Romper Room. This popular 1950s-1960s show featured a white female teacher leading a group of white kindergartenaged kids through a daily mix of lessons and fun.

A later show, The Mickey Mouse Club, replete with an all-white cast wearing Mickey Mouse ears, marketed the “wonderful world of Walt Disney” directly to America’s youth. By the mid to late 1960s, when most of us were in our teenage years, we were old enough to watch more mature offerings but very few were available.

The far gentler Andy Griffith Show featured the quiet Southern wisdom of Sheriff Andy Taylor as he raises his inquisitive son, Opie. The show did feature the requisite dim-witted illiterate Southern hick, in this case, Gomer Pyle. Eventually, Gomer left the show to star in his own top-rated program.

Green Acres’ main story line revolved around a New York City slicker who moved to a small rural town named “Hooterville.” The country jokes were many, as were the curvy women. A group of them left Green Acres to star in Petticoat Junction.

These television series were among the most popular shows in the late 1960s.

During the same time Arnold the talking pig was cracking jokes on Green Acres and Aunt Bee and Andy were fretting because Opie’s goldfish died, life outside America’s living rooms was shockingly different. Blacks were rioting in the streets, women were marching for their equal rights, young men were dying in Vietnam, war protestors were shot and killed on college campuses, Robert Kennedy and Martin Luther King were assassinated, and millions of my generation screamed “Make Love, Not War” and thought our parents’ stupid and out of touch.

All of the television shows I just mentioned were the property of broadcast giant CBS. But instead of being ecstatic with their success, they were concerned. Their shows were very popular in rural America, but not so much among the more educated and prosperous people who lived in our larger cities. Wishing to tap into these more affluent audiences, CBS management changed its programing. There would be no more corny sitcoms and no more “know-it-all white television dads and perfect families” from the 1950s. Enter All in the Family.

The show was set in a blue-collar neighborhood in Queens, New York. Archie Bunker, the show’s leading character, is a know-it-all, sexist, racist bigot. His wife, Edith, whom he calls “dingbat,” loves him despite his obvious faults and does her best to keep her divided family together. Daughter Gloria, a feminist, often yells at her father, as does her long-haired liberal husband, Michael, “Meathead” to Archie.

In Archie Bunker’s family, we see the fractures of our own country. Never before had a television show dared to so challenge our values.

Archie: Now wait a minute, Meathead, I never said your black beauties [black Americans] was lazy. You don't believe me, look it up.

Gloria: He's prejudiced, there's no hope for him at all.

Archie: I ain't prejudiced, any man deserves my respect and he's gonna get it regardless of his color.

Michael: Then why are you calling them black beauties?

Archie: Now that's where I got you, wise guy, there's a black guy who works down at the building with me, he's got a bumper sticker on his car that says 'Black is Beautiful' so what's the matter with black beauties?

Edith: It's nicer than when he called them coons…

When the famous black performer, Sammy Davis Jr. shows up at Archie’s home, he says,

“If you were prejudiced, Archie, when I came into your house you woulda called me a ‘coon,’ or a ‘nigger.’ But you didn't say that, I heard you clear as a bell, right straight-out you said ‘colored’!”

If Archie Bunker had truly been a hateful man, the show would never have aired. Racist in his language, most certainly, but mean-spirited, no. His “sin” was identifying with an America that was rapidly disappearing, and he was scared and confused. All he understood was that the White Anglo-Saxon Protestant (“WASP”) world of the 1950s was under attack, by any number of “radical groups.” Many of us identified with him to at least a tiny degree, even as he espoused his racist and sexist views. All in the Family dominated television ratings for nearly a decade and Archie Bunker became America’s “lovable bigot.”

The show’s producer, Norman Lear, and the actor who played Archie Bunker, Carroll O’ Conner, were both progressive in their views. But by creating a lov-able bigot, they might have severely diluted the strength of their message.

A study by Neil Vidmar and Milton Rokeach found that nonbigots understood the intention of the series and found confirmation of their views in the jokes. Bigoted viewers, however, perceived the series in the opposite way: it reaffirmed their bigotry. To them, Archie Bunker was both funny and speaking truths, according to their studies.

All too many viewers did not see the program as a satire on bigotry, had identified with Archie rather than Michael, saw Archie winning, did not perceive Archie as the character who was most ridiculed… and saw nothing wrong with Archie’s use of racial and ethnic slurs.

Their research also found that persons ranking higher on the “prejudice scale,” were also the show’s more frequent viewers.

In response to whether All in the Family changed television, O'Connor, who died in 2001 suggests: “No…. Television got right back into its old habits… the goal of comedy, sitcom, was to make people feel good, get a lot of laughs, and get the big ratings. Those were not really our goals. The goals of all the shows that came after us were that just.”

Norman Lear would go on to produce several other award winning shows, including two spinoffs from All in the Family. Maude, starring Bea Arthur, presented America with its first strong feminist character. Maude was as far removed from the acquiescing women of the 1950s as those know-it-all television dads were from the kitchen. The Jeffersons featured a black couple who were “moving on up” the economic ladder, much to the shock and chagrin of their former neighbor, Archie Bunker.

In the early days of television, it was thought that our citizens had a civic responsibility to watch news and news-related shows, and for a time, we did. But our country has turned away from such serious fare, and it is there that I have my quibble with Norman Lear. He popularized the loud-mouthed, domineering character, at the expense of thoughtful and meaningful dialogue.

I’d rather watch the miniseries, Roots, a television miniseries that covered slavery through the lives of generations of slaves, then to hear George Jefferson complain about “white honkies.”

Instead of Maude, give me Mary Tyler Moore. During her long-running series that focused on her struggles to find work-place acceptance in a male-dominated world, she didn’t raise her voice or insult a soul.

But those are minor quibbles. Let us accord Archie his due respect, as has the National Museum of American History. Go there and you will see the threadbare chair where Archie Bunker, one of the most remarkable characters in television history, dispensed his views as if sitting on a throne, and we laughed, for better and worse.