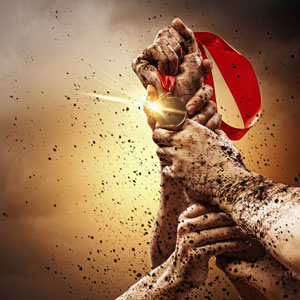 On an uneven baseball field in a small South Carolina town, a member of the “Gator Girls” is pitching poorly, but with a “so what” shrug of her rounded shoulders sends the clear message that she does not care. It is the last game of the year and the team has not won a single game. My daughter, Molly, had pitched earlier in the game, but was removed from the mound with her team leading 9-0. “Please, let me finish the game,” she had begged the coach, but he said no, and then waved his disinterested daughter onto the field to pitch. Now the score is 9-8, but despite the lead the game feels lost. Only two players in the field— Molly, and a toothpick of a black girl playing centerfield, Laquisha—have enough skills to catch a ball for the last out. I am sitting next to Laquisha’s dad and grandmother.

“I can’t take any more of this pressure!” Granny mutters as she wipes her brow with a clean white handkerchief. “It’s sort of like being in front of the judge!”

“That’s right,” her son, a brick mason says. “You don’t know whether the judge will be in a good mood or a bad mood. It’s the same with this game. It could go one way or another.”

The batter smashes the easy pitch in a towering arc that appears well beyond Laquisha’s reach.

“Laquisha, run like there’s a big dawg chasing you! Catch the ball!” her dad screams.

“Oh, my Lord, oh my Lord,” Granny groans. “This excitement may just do me in.”

We shout our encouragement as 14-year-old Laquisha dashes to the spot where she hopes to catch the ball. If she snags it she will be congratulated, if she doesn’t, she will be told, “Nice try.” It is exactly the sort of low-key organized game that Carl Stotz had in mind in 1939, the year he created Little League baseball. But 16 years later, he left the organization, rather than be associated with its plans to turn his no-pressure neighborhood games into a high-stakes national tournament and the now famous Little League World Series.

Today, Little League baseball is big business. The playoffs and World Series are televised on ESPN. Children no longer play their sports in cheap sneakers, or share a few “team bats” like I did—the shoes are Nike and each kid owns a sack full of customized equipment. But let’s shove aside the outlandish sums of money that we spend on training our kids for sports, for those costs are dwarfed by this one: American children, once the smartest on earth, are striking out in the classroom. Three years after Laquisha raced after the ball, I found myself in the middle of this mindless, “sports at all cost” culture.

The warning signs about organized, adult supervised youth sports appeared as far back as the 1930s, the decade that Little League was founded. Then, as Jack W. Berryman writes, academics issued “a steady stream of proposals, guidelines, speeches, manuals, and periodical articles warning against too much competition for elementary school children.”

In 1964, the year I first played on a Little League team, the Los Angeles Times published a four-part series on the organization, examining everything from dysfunctional, we-must-win-at-all-cost parents, to the alarming incidence of pitcher’s elbow.

Steve Marshall, an assistant professor of epidemiology and orthopedics at the Injury Prevention Research Center at the University of North Carolina at Chapel Hill, writes,

A big difference today is that kids involved in sports play harder and younger than ever. And with dreams of college scholarships and multi-million dollar professional contracts, the competition can get out of hand…Youth sports have become about more than kids having fun. Frankly it’s beginning to get out of control. It’s almost a national obsession.

Today, among the world’s most developed countries, America’s high school students now rank 31st in math and 17th in reading. Even once struggling kids from Poland score better than their American counterparts! Hmm—could this dramatic flip in world rankings be attributed to the fact that Poland eliminated their high school sports teams in order to better focus on academics? Journalist Amanda Ripley notes that

During her high school years, Molly developed into an outstanding softball player and was invited to hone her skills on a “travel team.” I went along with “the program,” thinking there are quite a few things worse than having a teenage daughter who enjoys sports. It was one long, hot, summer.

On Thursday mornings, Molly would leave home to play in a four day “regional tournament” in some godforsaken small town. Thousands of parents, like me, are held hostage to watching four days of games in 100 degree heat, organized and run by hyperactive coaches and tournament organizers.

Oh, sorry, no, I wrote that poorly—the other parents were not like me—most looked forward to the games, most hauled their other children to these events, most cared if the team won the game.

If I made a comment about wishing the team would lose so we could go home, they’d look at me as if I needed counseling. Parents hoped that their daughters would improve their game, “make it to the next level”, earn a scholarship to play softball at some undetermined college. The Summer That Would Not End gave me a stunning insight into our sports culture, a world that had greatly changed since I was a kid in the 1960s. So what caused these seismic shifts?

Historian Peter Stearns writes that the 1960s saw, “a growing competitive frenzy over college admissions as a badge of parental fulfillment.” The demand to get into college—thanks to the huge number of Baby Boomers like me—exceeded the supply. Parents focused on athletics as a “differentiator,” something that set their children apart from others who also had good grades.

Our unhealthy preoccupation with children’s sports may also be attributed to the staggering amounts of money that a handful of top-notch athletes earn in their professions. In the 1950s and 1960s, many professional athletes held off-season jobs to help pay their bills. But in the 1970s, when the courts properly decided that players had bargaining rights and were no longer the exclusive property of the team owner, the bidding wars for top players began. In that same era, due to the increasing availability of cable television and its accompanying need for more programming, the demand for more games increased. The business of sports took over at the pro level, then college, then high school, and today, our elementary schools.

Mo’ne Davis, the ace of the Taney Dragons in the Little League World Series, spoke fluently about release points and the art of confronting batters who were uncomfortable hitting the ball to the opposite field. It was advanced stuff for any pitcher, let alone one who was 13 years old…Davis, having captured much of the nation’s attention in recent days with her blazing fastball and her waist-length braids, was preparing to take the mound Wednesday night for her Philadelphia-based team against a squad from Las Vegas.

I am happy for Mo’ne, and the success she had playing in the historically “boy’s only” Little League.

But is it really healthy for our children to play games on national television? Might it be healthier if we wrest the game away from ESPN and big business, and return it to the kids and local playgrounds?

A decade has passed since Laquisha raced after that ball, but I bet she still remembers her catch and the joy she felt when she was hugged by her teammates. Nor will I forget exchanging “high-fives” with her grinning dad, nor the memory of her granny sitting down, saying that game had just “done her in.” I sometimes wonder why we remember the things that we do, but in this case, no. I will not forget that imperfectly played game on a hot summer evening played by kids from all walks of life wearing sneakers, because it was the game that I used to play, and the game I used to love.