Americana: Billy’s America is Fading Away 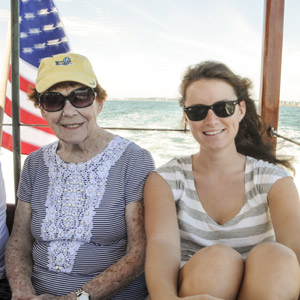 (Left) The author’s mother and daughter: seated shoulder-to-shoulder, but miles apart in their outlooks about patriotism.

Patriotism is the last refuge of a scoundrel. —Samuel Johnson

In 1974, the small Caribbean island of Granada gained its independence from Britain. A few years later its freedoms were lost when a military dictatorship grabbed power. In 1983, concerned that the bad guys might be in cahoots with the Soviets, President Ronald Reagan ordered a military intervention. We quickly dispatched the dictatorship and restored freedom to the island. By a wide margin, the United Nations condemned our unilateral actions. “Oh, for the love of God,” Mom sputtered, when she heard of the world’s reprimand.

“Billy, your father and I have been to Granada. When I went into a store and the owner learned that I was American, she threw her arms around me and said, ​'The United States is the greatest country on Earth. Thank you for what you did.'”

Before launching into the topic of American patriotism, there are a few things you should know about my 97-year-old mom. First, she is always entertaining and sometimes accurate. Second, she never met a story she couldn’t fine-tune to support an overarching narrative, in this case, America’s greatness. Third, when she dies she will take to her grave a level of patriotism that may never again be matched. The numbers don’t lie.

According to the American National Election Study, 81 percent of the Silent Generation (those who are 69 to 86 years old in 2014) love America while only 58 percent of Millennials (18 to 33 years old) feel the same. Let’s consider this trend, beginning with a few iconic words.

I pledge allegiance to the flag…

Even today, most schools begin their day by asking students to recite the Pledge of Allegiance, a practice that began in my mother’s era. Many assume the words were written by our Founding Fathers, but they weren’t, they were written by a couple of businessmen who wished, at least initially, to simply sell more magazines.

Daniel Sharp Ford [1822-1899], who owned the Youth’s Companion grew the periodical into a national powerhouse by using “premiums” to attract subscribers. Every October, the magazine would offer many inexpensive goods, provided the purchaser solicited others to purchase subscriptions. His nephew, James B. Upham, headed the premium department.

In its October 1888 issue, the magazine added American flags to their product mix. The accompanying advertisement noted that, “The magazine hopes that the “Stars and Stripes [might] be hung upon the walls of every school room in the land” so that “patriotism and love of liberty [would] be unceasingly taught.” A couple of years later, the magazine declared its ambition to see the nation commemorate the “Four Hundredth Anniversary of the Discovery of Columbus by raising the U.S. Flag over every Public School…”

In March, 1891, Francis Bellamy joined the magazine’s team. A former minister, he, like Upham, believed that America, due mostly to the arrival of millions of immigrants, had forgotten its traditional values. Sure, he wished to sell a few more flags, but his motivations were not simply monetary. With the conviction of an Old Testament prophet, he pushed his agenda with President Benjamin Harrison and then with Congress. He got his way. In 1892, Harrison announced,

That the President of the United States be authorized and directed to issue a proclamation recommending to the people the observance in all their localities of the four hundredth anniversary of the discovery of America, on the 21st of October, 1892, by public demonstrations and by suitable exercises in their schools and other places of assembly.

Those inspiring words seem so innocent and universal, as American as apple pie, Chevrolet, and the girl next door. But maybe, as Richard J. Ellis argues, they weren’t.

At the time of Bellamy’s death in 1931, the Pledge was fast becoming a defining symbol of national patriotism, not quite at par with the “Star Spangled Banner” but not far behind either. Pledging allegiance to the flag was seen by many just not as an expression of patriotism but, in the words of the U.S. Flag Association, as an “antidote” to radical and alien ideas.

The early 1920s saw a series of restrictive immigration laws all but closing our borders to Eastern Europeans and Asians. Northern Europeans, that is, that same “stock” that founded our country, were still allowed, albeit in reduced numbers. My mother, due in part to these laws, and her upper-middle class upbringing, will live her entire life without having an Asian, African, or poor friend.

I pledge allegiance to the Flag of the United States of America, and to the Republic for which it stands, one Nation under God, indivisible…

In 1954, God found his way into the Pledge of Allegiance, during the early days of the Cold War. In one corner of the ring, were the godless, Communist countries like Russia, Korea, and China. In the other, God’s chosen land, America. All it took to place God in the pledge was the will of the people, an act of Congress, and the signature of the President.

God, where are you?

I missed fighting in the Vietnam War by just a few years, but surely that was the cry of my fellow Baby Boomers as they suffered and died in that mindless engagement. Mom’s generation had their patriotism shaped by victory in World War II, mine in the rice paddies of Southeast Asia. Combine that quagmire with Watergate—the famous government scandal that involved President Richard Nixon—and we are not surprised to learn that my generation is less patriotic than hers. But despite these blemishes, ours was still the land of plenty.

When I graduated from the University of South Carolina in 1978, my future was assumed and assured. Good jobs were plentiful for those with college educations and for the skilled tradesmen.

I pledge allegiance to the Flag of the United States of America, and to the Republic for which it stands, one Nation under God, indivisible, with liberty and justice for all.

Recently, I listened to an older man’s story, one I have heard in so many small South Carolina communities. “Ours was once a prosperous county, but when the textile mills closed in the 1950s and 1960s, that all ended. Fairfield County is around 70% black, always has been, so the truth is that we don’t have too many folks around here—including whites—that have much education, or hope. In the last decade or so, people have lost their pride and civility, too.”

My daughter, Molly, and other members of her generation see such social injustices. Their America is not my mother’s America, nor even mine, for that matter. I never had to worry about finding a job in my field or paying off a college debt. Nor did I have the disillusionment that may come from comparing our value systems with those of other countries! We were the gold standard of the world’s countries, that is what we were taught and that is what we believed.

In just a few short months, we will elect a new president. It is unlikely that either candidate will measure up to two of my favorite presidents, both of whom were very patriotic. One was a liberal Democrat, the other a conservative Republican.

Franklin D. Roosevelt (FDR), who led our country during the Great Depression and World War II, implemented programs that reached out to all Americans and by doing so, gave every citizen hope.

Ronald Reagan, unlike FDR, believed in less government and fewer social programs. But similar to FDR, he reached out to all Americans and we elected him president by landslide margins.

When I was young, at the end of each school day we’d leave the classroom and march single-file to the rows of orange school buses. “Stars and Stripes Forever” played over the school’s intercom as we walked the walk, playing its way into my heart and soul. I am still that American boy, but the music, well, it no longer plays as loud as it once did. Billy’s America, that land of hope and inclusive optimism, is now fading away.