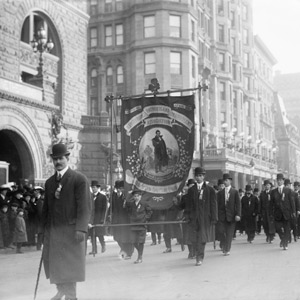 The bosom of America is open to receive not only the Opulent and respected Stranger, but the oppressed and persecuted of all Nations and Religions; whom we should welcome to a participation of all our rights and privileges, if by decency and propriety of conduct they appear to merit the enjoyment. —George Washington (1783)

On an overcast Irish afternoon I selected a five iron from my golf bag, placed my ball on the tee, and took aim at a distant green. A deep chasm lay between the tee and green, and it was there my poorly struck shot landed. I will be back in a minute, I told my friends, as I slowly made my way down the steep hill to hit my next shot. Ordinarily, a poor shot irritates me, but not on that day.

The short Par 3 on the Waterville course is called the “Mass Hole.” Its golf architect, knowing of the land’s history, refused to pour dirt into the chasm. During the punishing years of British rule, this deep trough was the place where Irish Catholics secretly gathered to practice their banned religion. I took a quick swing and pitched my ball onto the green.

Barely a century ago, millions of ragged Irish people escaped the hollows and came to America hoping for a chance, a mere chance, at a better life. I am a descendent of this race of people, who, despite their centuries of British-controlled misery, or better, maybe because of them, has provided the world an extraordinary number of poets, storytellers, and dreamers. A few years ago, I applied for and received my Irish citizenship.

If Governor Bobby Jindal of Louisiana had simply offered that it is a wonderful thing that we live in a country where we are free to choose between being an American-American, or a Hyphenated-American, I would not have been irritated. But the position that he puts forth is so contrary to the historical and cultural realities of American immigration that I wish to set the record straight. From Jindal’s speech:

For convenience sake, let us shove aside how this dubious “philosophy” might apply to, say, refugees fleeing from Syria, and move to American history. What might one of our most historic immigrant groups, African-Americans, say about those words?

We hauled them here from Africa. We broke up their families. We put them to work in the plantation fields. We sold them as if they were cotton and called them uppity if they spoke their minds. For 300 years they wished to be part of our culture, but were denied the opportunity! We forced the blacks to establish a separate culture within America! Oh, sure, by the early 1960s a few blacks were “accepted” in our culture, but most were pressured to appear “white.” Thankfully, laws and atti-tudes were changing.

In the late 1960’s, African-Americans initiated a “Black is Beautiful” campaign. In dress, language, and outlook, in fields ranging from music to sports and politics, the uniqueness of the long-repressed cul- ture within a culture burst forth into American life.

For nearly all of our other large immigrant groups, the decision to leave their home country was a choice. Some, like the Jews and Irish, came to America to escape tyranny and war, others “merely” hoped to improve their lives. The former groups, according to Duke University professor Jacob L. Vigdor, are the more eager to assimilate into American culture because there may be no return to their home country.

America’s largest single ethnic group is not the Irish, African, or Hispanic, it’s the German. According to a recent census, 46 million are of German ancestry, a number that far exceeds any other country. From 1845 to 1855, more than a million Germans fled to the United States, in their case, to escape economic hardship and an 1848 revolution. The Germans had little choice but to settle in America, for few other countries would accept the German people. With some money and farming skills, the Germans settled in the expansive Midwest.

We do not think of this race of people as “German-American,” as we do for our other immigrant groups for a logical reason. During World War I, and again during World War II, there was significant anti- Germany sentiment in our country. Beginning in the early 1920s, highly restrictive immigration laws were passed. As a consequence, America of the 1960s—my childhood America—consisted of two major groups—second and third generation European-Americans (85%), and African-Americans (13%).

Today’s German-Americans are still quietly successful. Their median household income is above the national average, and they are more likely to have college degrees than other Americans. In addition to such fun imports as beer and hot dogs, their greatest contribution to our country is their renowned “German engineering,” without which we would not have landed on the Moon in 1969. Albert Einstein is perhaps the most famous German-American immigrant.

Jews from all over Europe arrived in small numbers during the early parts of the 19th century, and then in much greater numbers during the latter half. Initially, their motivation was freedom of religion; later, they fled for their lives. Much of their native skills were in banking and finance, because these trades were among the few available to them in many parts of Europe. America became the preferred place to emigrate precisely because there was an existing Jewish community and accompanying culture to ease the transition.

Similar to the Africans, the Jews were not initially welcomed in our White-Anglo-Saxon-Protestant world. Like nearly all other immigrant groups, fuller assimilation into the mainstream would take time. We have the Jewish people to thank for creating Superman and Batman, the humor of the Three Stooges and Jon Stewart, and for such American institutions as Sears and Goldman-Sachs.

The Italians, who arrived in unparalleled numbers at the turn of the last century, were different than the other large immigrants groups. One in three did not plan to stay in America: why, they simply wished to make some money and return to their homes in southern Italy. In at least some respects, with their limited English, minimal education, Catholic faith, and strong families, they were similar to today’s Hispanics.

Most of us native born folks associate Italian-Americans with organized crime, no more vividly captured than in the iconic movie, The Godfather. The real-life New York City crime families all had origins back to Sicily and the Italian mob. On the other side of the ledger, the Italian-American contributors to our history and culture include singers ranging from Tony Bennett to Lady Gaga, to the iconic film star of my mother’s era, Rudolph Valentino, to the father and son governors of New York, Mario and Andrew Cuomo.

In From Immigrants to Americans: The Rise and Fall of Fitting In, Vigdor compares the skill sets of our various immigrant groups by rating the quality of the “average job” they work upon their arrival. For example, he assigns a score of 9 to farm laborers. A more skilled waitress position merits an 11. A salesman is assigned a value of 23, an accountant 38, and a physician, 80. In 2007, the average United States-born worker scored a 30.

In 2007, arrivals from Mexico ranked the lowest of the immigrant groups he studied. They scored a 23, or 7 points below the average United States born worker. Indian-Americans ranked the highest, with a score of 37. And, oh dear, my Irish ancestors checked in with a 20!

I was a teenager for most of the 1960s and remember an all-white world. Then, I did not care about my hyphenated heritage, but I do now, for I like knowing that I am part of a greater drama. Today, the words on the base of the Statue of Liberty—"Give me your tired, your poor, your huddled masses yearning to breathe free"—have meaning.

The words do not say that you must speak English, for many of the immigrants who built the railroads and worked the fields and stoked the furnaces of America did not. Nor is there a requirement that you must leave your history and culture behind to immediately become “American.”

Whether a new arrival wishes to escape war or oppression, or simply have a go at a better life, there is plenty of room in our land of plenty. Such are the lessons I learned from my school, my church, and my Irish-American heritage.