COVID-19  In-depth info for Indians in Atlanta/Georgia. Click here
Home > Magazine > Features > Americana: Mad as Hell and Not Going to Take It Anymore

Americana: Mad as Hell and Not Going to Take It Anymore 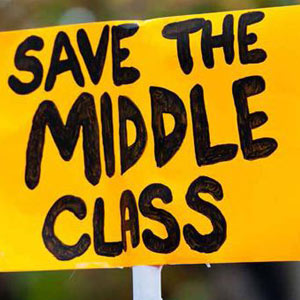 The Story of Middle Class America

My college friends and I had several preferred hangouts during our years at the University of South Carolina, but one, the quiet bar that was within easy walking distance of our dorm rooms was our favorite. Ask me what I learned in college and I will not speak of Maslow, Kant, or trickle down economics, but of the conversations I had with the sons and daughters from families so much different than mine, save for one common belief.

Growing up, I thought my family middle class. If clothing could be passed down to the next sibling, it was. A birthday present might be a bicycle, but it would be a used bicycle. When I graduated from high school, many of my friends received a new car or lots of money. I didn’t. My parents gave me a new radio.

But we were not middle class.

My dad had a thirty-year career with IBM. We belonged to fine country clubs. We took nice vacations. But such trivial things paled when compared to our common and unspoken bond: our parents, whether they were IBM executives or Pittsburgh steel workers, believed America to be the land of endless opportunity— regardless of class—and so did we.

Decades have now passed. The bar at the corner of Main and Blossom is gone, never again to pour its pints of amber grain. America’s middle class works harder than at any point in our nation’s history but they don’t make fair money for their efforts. They believe “the system” is rigged—against them. They are angry, mad as hell and not going to take it anymore (as actor Peter Finch exclaimed in the iconic 1976 film Network).

What has happened since 1978, the year I graduated from college?

In our country’s early history there were a few rich people, but in agrarian societies such gaps didn’t matter. It was during our Industrial Revolution, a period of time from 1850-1920, when we see the division of the American workforce. “Blue collar” middle class workers labored in the factories, while “white collar” employees—sometimes middle class, more often an upper class—managed employees or assisted with the business. Each group worked, played, and worshipped in distinct neighborhoods.

We will leap over the anomalies of the Great Depression and World War II to 1954, the year I was born. Ten years of shared prosperity had preceded my arrival, twenty more would follow. Economists refer to the period as the “Great Compression,” so named because of the consistently narrow pay gaps between the middle and upper classes. It was the greatest period of prosperity—for all—in our country’s history.

It was also in this golden era where we the people believed our politicians heard our voices.

In 1963, 250,000 ordinary people made their way to Washington to protest the state of our race relations and to hear Dr. Martin Luther King deliver his “I have a dream,” speech. Presidents John F. Kennedy and Lyndon B. Johnson heard the voices, as did members of Congress.

In 1970, we the people—fed up with our country’s filthy rivers and air—organized “Earth Day.” Twenty million of us participated, making it the largest oneday grassroots event in history. We expected to be heard and we were, as a series of environmental laws soon passed. Businesses accustomed to dumping and spewing were ordered by the government to install expensive new anti-pollution equipment. Not wishing to comply, they decided to fight back with their money and power.

Here is our “ah-ha” moment: Businesses, not wishing to implement expensive change, and concerned about what might be next, fought back.

After Earth Day, more than 2,000 companies set up Washington offices, increasing from 175 in 1971 to 2,445 in 1981. By 1978, nearly 2,000 different trade associations were operating in Washington with a combined staff of over 50,000 employees. If the businesses pooled their lobbyists, they could assign 135 for each member of Congress.

In 1963 and in 1970 all of us believed our voices counted. Today, the middle class believes that our national politicians are “in the pockets” of “Wall Street.” Pulitzer Prize winning author Hedrick Smith writes,

Virtually every economic bill that passed in 1978 had a policy tilt in favor of business and the wealthy, often at the expense of the middle class, even if that impact was not immediately apparent.

One of the more interesting topics we studied in business school was the notion of a Social Contract: Does a company have a moral obligation to its employees and local community? What, exactly, does that mean?

One of their competitors, Costco, pays their employees over $20 per hour. One-time CEO Jim Sinegal, whose own salary topped out at $2.5M, noted,

We’re trying to build a company that’s going to be here fifty and sixty years from now. We owe that to the communities where we do business. We owe that to our employees that they can count on us for security. We have 140,000 employees and their families…who count on us.

Unfortunately for the middle class, the notion of the Social Contract for too many contemporary CEOs, hedge fund managers, and investment bankers now seems as dated as a 1978 textbook. Need a few more examples?

The CEO of Countrywide Financial “earned” over $500 million dollars in compensation, even as his company went belly-up.

According to Robert Frank, “By 2004, the richest one percent of Americans were earning about $1.35 trillion a year—greater than the total national incomes of France, Italy, or Canada,” without flinching.

The truth is that our middle class works harder than ever, their relative incomes haven’t increased in thirty years, the national government doesn’t seem to listen, and whether they are a middle class Democrat or Republican, they’re angry. And one of the most quintessential aspects of the American Dream, an affordable college education for your children so they can better their lot—is in fact just that, a dream.

In 2006, my daughter Molly, a solid “B” student in high school, applied for admission to the University of South Carolina. She was not accepted on her first attempt. Nor was she accepted at a handful of other in-state colleges. Eventually, she gained admission to the University of Colorado in Boulder. Total cost you ask? More than what the parents of my college friends could have afforded.

“My dad is a steel worker and a member of the union,” Mark once shared with us as we sipped our beers. “He and mom are so proud I’m attending college. When I graduate, I am going to move back to Pittsburgh and work in law enforcement.”

“My dad is a manager at a local textile mill,” Richard, a South Carolina friend volunteered. “He’s not sure how much longer he will have a job, thinks it a good idea that I find a career in a different field. Says that the government doesn’t care if all our jobs go overseas.”

Today, the sons and daughters of policemen and textile mill managers, if they can afford to attend college, will likely graduate with significant debt. Such matters and others cause Smith to conclude,

We are at a defining moment for America. We cannot allow the slow poisonous polarization and disintegration of our great democracy to continue. We must come together and take action to rejuvenate our nation and to restore fairness and hope in our way of life. We see the challenge. It is now time: We the People must take action.

But it will be the next generation of Americans who effect change, not mine. I see the future in my daughter and her generation.

Molly, who was eventually accepted at my alma mater, to set the record straight, went on to complete her degree in political science at the University of Colorado with an emphasis on social justice. Today, she is the Organizing Director of New Era, a Boulder based organization that focuses on equality issues for the disenfranchised, including the one-time backbone of American society, our suddenly endangered middle class.

We need Molly and her generation to come of age, and in the great American tradition, correct the wrongs of the previous generation.

It will happen, that’s what I believe. Needs to happen sooner than later, because a whole lot of people are hurting, and angry.