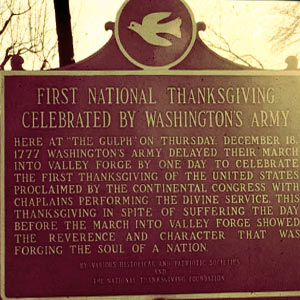 (Left) A marker in Valley Forge, Pennsylvania, proclaiming the site of the first national Thanksgiving celebration.

The Pilgrims did not land anywhere near Plymouth Rock. More shocking, however, may be the fact that it was Presidents George Washington and Abraham Lincoln who were more responsible for today’s Thanksgiving tradition than were the Pilgrims and the Indians.

On September 6, 1620, 102 people seeking religious freedom left their English homes, boarded the Mayflower, and set sail toward the New World. How joyous the Pilgrims must have been when they waded ashore at Plymouth Rock, Massachusetts, after eight weeks of dangerous travel! How sincere would be their prayers!

A year later, the rugged group became self-sufficient, due in part to their resourcefulness, but also thanks to a local Indian tribe, the Wampanoag, who taught them how to cultivate the rough land. In November 1621, the grateful Pilgrims invited the natives to our nation’s first Thanksgiving, a fine feast consisting of roasted turkey, mashed potatoes with butter, seasonal cranberry sauce, and pumpkin pies for dessert. This iconic story, with its strains of American exceptionalism and religious overtones move many, including me, to tears.

Huh? What? No! Absolutely not! I am not “moved to tears” by patriotic emotion! I am crying because a significant portion of the Thanksgiving narrative that I have just shared is full of distortions, yet tens of millions of people believe it is true!

How can this be?

Before we correct the distortions, let us acknowledge that the Pilgrims do belong in the pantheon of American history but for a reason unrelated to our national holiday. Prior to their arrival, they wrote their own governing guidelines in the famous Mayflower Compact, an iconic document that many consider our country’s first attempt at democracy. Now, here is the rest of the story.

For starters, the colonists did not land at Plymouth Rock.

If you were the captain of the Mayflower, would you really risk the lives of 102 exhausted passengers by saying, “Hey, I have decided to land our ship by that rock”? Christopher Jones, captain of the Mayflower, it appears—contrary to popular belief— did not, either. None of the writings from that period mention the Pilgrims’ landing anywhere near a “Plymouth Rock.” The story was constructed 100 years after the fact! Most historians agree that the Pilgrims landed on the tip of Cape Cod, a long, extended peninsula in modern Massachusetts.

As we would suppose, there are many artistic renderings of this famous group. Warning! The works that show equal numbers of men and women dressed in their “trademark” white and black clothing are historically inaccurate. The Pilgrims used vegetable dyes to make clothing in a fine variety of colors, in-cluding red, yellow, purple and green, and fewer than thirty women—and perhaps less than twenty— elected to leave the comforts of their English homes for a life in this harsh and untamed land.

Lacking the necessary food and shelter to survive that first winter, 46 of the 102 colonists died of disease or starvation, including a high percentage of the women. The governor of the colony, William Bradford, described the land as “a hideous and desolate wilderness, full of wild beasts and wild men.”

It is possible that the entire colony would have perished, except for the kindness of the “wild men,” in this case, the native Wampanoag tribe. In the spring of 1621, these Indians taught the white people the necessary skills that their tribe had practiced for hundreds and hundreds of years—how to cultivate the native crops, how to fish, how to hunt. By the end of the summer, the Pilgrims had produced enough food to last the next winter.

The birth of Thanksgiving as a national holiday was far into the future, the end of native Indian dominance, closer.

When Christopher Columbus “discovered” America in 1492, as many as 5 million Indians roamed the land. When the Pilgrims arrived in 1621, some believe that their numbers had dwindled to 250,000, the decline due to the inability of their immune systems to ward off European diseases such as smallpox and measles. The Pilgrims were surprised to find completely uninhabited Indian villages, lands that had been cleared but not recently cultivated, but we are not. 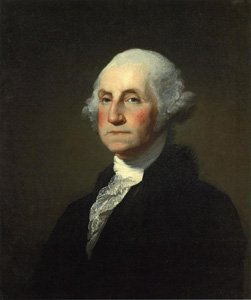 (Right) A portrait of George Washington by Gilbert Stuart Williamstown.

Over 150 years later on October 3, 1789, President George Washington set aside November 26 as a day of prayer and Thanksgiving, a tradition he continued throughout his presidency. Several years later, President Thomas Jefferson, ever suspicious of over-reaching federal dictates and the separation of church and state, did not.

Until 1841, the Pilgrims’ story was mostly forgotten and rarely played a role in Thanksgiving celebrations. Then, when historian Andrew Young published a collection of writings by the founders of Plymouth Colony, including Edward Winslow’s account of the Pilgrims’ 1621 feast, our beloved “Thanksgiving narrative” took form. According to Laurie C. Hillstrom:

As it turned out, Young’s interpretation forged a lasting connection between the Pilgrims’ feast and New England’s Thanksgiving holiday tradition.

As much as I enjoy the quintessentially American story of the against-all-odds-freedom-seeking Pilgrims, I am more drawn to 1863, a year in which the outcome of our Civil War was still in doubt and the year in which Thanksgiving became a continuing annual event. 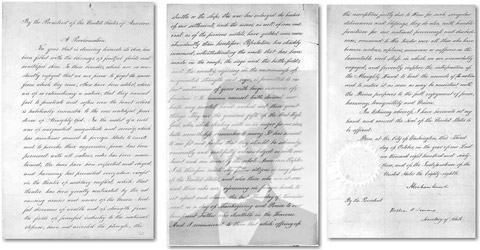 (Left) Abraham Lincoln’s presidential proclamation setting aside the last Thursday of November as a day of Thanksgiving.

In July of that year, 51,000 Confederate and Union soldiers died in a three-day battle in Gettysburg, Pennsylvania. Several months later, a tall, gangly, selfeducated, “country bumpkin” of a president, Abraham Lincoln, declared that the last Thursday of November should be set aside for Thanksgiving, whether one lived in the North or the South. His somber, reflective, and inclusive words should be the basis of our Thanksgiving, not the dubious account of black and white clad Pilgrims sharing a meal with their delighted guests:

I do, therefore, invite my fellow-citizens in every part of the United States, and also those who are at sea and those who are sojourning in foreign lands, to set apart the last Thursday of November next as a Day of Thanksgiving and Praise to our beneficent Father who dwelleth in the Heavens. And I recommend to them that while offering up the ascriptions justly due to Him for such singular deliverances and blessings, they do also, with humble penitence for our national perverseness and disobedience, commend to His tender care all those who have become widows, orphans, mourners or sufferers in the lamentable civil strife in which we are unavoidably engaged, and fervently implore the interposition of the Almighty Hand to heal the wounds of the nation and to restore it as soon as may be consistent with the Divine purposes to the full enjoyment of peace, harmony, tranquility and Union.

Thanksgiving is my family’s favorite tradition. Throughout the decades and no matter the miles, we have gathered together to enjoy each other’s company. We do not pay too much attention to Black Friday, a retail event with its origins in the 1920s, the decade when department stores such as Macy’s began their annual Thanksgiving parades, nor do we watch football games on television. For the record, the first televised Thanksgiving game occurred in 1956. Instead, the Fitzpatrick clan is happy enough to simply reconnect and reminisce.

My 95-year-old mom is still alive, well, and cooking, and is looking forward to this year’s holiday. If you wish to drop in and say hello to our family, please do so. Oh, how ironic—she lives on Wampanoag Lane in Pinehurst, North Carolina.

My dad died in 2007. As the only son, it is now my responsibility to sit at the head of the table and to carve the roasted turkey, but that is the lesser of my duties. As Dad once did for so many decades, I now recite the prayer that has become such an important part of our family’s tradition, the Irish Blessing. It is my honor to share my favorite blessing with you:

May the road rise to meet you.
May the wind be always at your back.
May the sun shine warm upon your face,
and rains fall soft upon your fields.
And until we meet again,
May God hold you in the hollow of His hands.