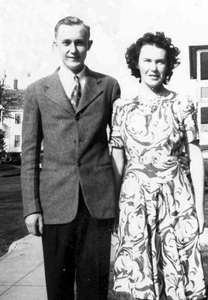 The author’s parents, William J. Fitzpatrick and Doris McGowan: in their youth, and from recent years. 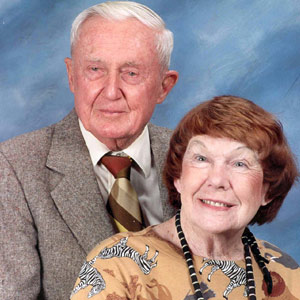 When the Poughkeepsie, New York weather prevented us from venturing outside, my younger sister Donna and I would often play in our dimly lit second story attic. Dad, who built much of the home, never got around to finishing the attic flooring so we had to be careful not to avoid stepping on the uncovered insulation.

“You’ll end up on the first floor if you do,” mom and dad told us, in their matter of fact way.

Mom stored much of her cherished memorabilia in the attic, including a large collection of Big Little Books. This Great-Depression-era genre featured familiar characters such as Buck Rogers, Dick Tracy, and Nancy Drew. Mom had traditional books, too, including a series featuring the exploits of the precocious girl-sleuth, Kay Tracey. Our mother was born in 1919, a year before women had the right to vote.

As much as we enjoyed mom and dad’s old books and games, we really liked our parent’s old photo albums. Was our often self-absorbed mom really a nurse during World War II? Did our quiet and easy-going dad kill anyone while he served in the army?

In November 2016, Donna and I were again sifting through mom’s belongings, but this time in Pinehurst, North Carolina. We thought she would live to be a hundred years old but she didn’t, missing the mark by just three years. Our always youthful dad died in 2007. The week before he died, seemingly oblivious that he was eighty-seven years old, he climbed a ladder and replaced a few damaged shingles on the roof.

“Mom and dad were quite the pair,” Donna said as she emptied mom’s closet of the latest fashions from Chico’s, a fashionable retail chain. A local store had wished for mom to be in their December fashion show. “They never thought of themselves as old.”

November was one lousy month for me, made so, of course, by my personal loss, but also by the sense that something else had died with the election of Donald F. Trump. The New York Times editorial team felt the loss, too, writing on December 10, 2016:

The institutions that once generated and reaffirmed that shared reality—including the church, the government, the news media, the universities and labor units—are in various forms of turmoil or even collapse.

Well, their list is not quite complete. The New York Times should have included the most important institution of all, the American family. Today, over half of America’s kids are born outside of marriage, a sharp contrast from the not so distant past. I cannot imagine what life in a single parent home might be like, but I do know what it was like growing up in the home of William Fitzpatrick and Doris McGowan, members of our country’s Greatest Generation, a group that whole-heartedly supported “the institutions that once generated and reaffirmed that shared reality.”

“Billy, it was an awful period of time in the country and our family. My father had to work two low paying jobs for us to keep food on the table.”

“Hold on a minute, Mom! In every one of your photos from the 1930s, you’re dressed in the finest outfits. Look! Here, you are at a tennis camp. Here you are at the White House. Here you are at a fancy resort. Nice bathing suit, by the way. Here you are surrounded by a number of good-looking well-dressed men, none of whom resemble dad.”

“Billy, those clothes were hand-me-downs! I didn’t get to take a nice trip every year!”

Still, my mom, who was the 1937 Class Valedictorian of Torrington High School, enjoyed a very privileged life from birth to death.

Dad never talked about his service during World War II for a good reason—he had nothing to talk about. He served near the end of the war in a unit that was responsible for maintaining the peace in Italy, Austria, and Switzerland. Oh, those damning photos! There’s dad in the Swiss Alps. There’s dad feeding the pigeons in Venice. There he is swimming at Lido Beach.

When the United States Army provided our family a flag for his grave, my mother sniffed, “Well, he’s not going to like that! He hated the army!”

So my parents were two very ordinary members of the Greatest Generation. My highstrung mother—an only child with a penchant for fine clothes, a need to talk, and a smoldering lifelong resentment from the discriminations that prevented her from having a business career—and my quiet dad. Like my mom, who as an only child was doted on by her adoring father, he had his own family issues as a kid.

“Marry Doris McGowan and we will disown you,” his father told him, but he married her anyway. He then worked two full-time jobs and saved $10,000—a huge sum in the 1940s—so they could buy a home. After the war, he and mom went about the task of raising a family, and achieving the noble American goal of providing a better life for their children.

Our family went to church, every Sunday. Sniffles, snowstorms, or family vacations brought no respite from the requirement. When my dad once offered that maybe instead of church we could go to the beach on a Sunday morning, mom shouted her reply. “I will not allow my family to turn into a bunch of heathens!”

We were expected to do well in school, but not at the expense of a balanced childhood. “Get out of the house and play,” mom usually ordered, after we arrived home from school.

Dad, who remained a distant and quiet figure during my childhood, would arrive home from work around 5:30, pour a scotch and water, then switch his attention between the newspaper and the CBS Evening News with Walter Cronkite. “Uncle Walter,” as our nation called the calm anchorman, was one of the most trusted men in the country.

“Dinner’s ready,” Mom would shout, and the entire family would gather. But outside our suburban homes, the times were a changin’.

Is God Dead? Such was the question that Time magazine posed in 1966, one of the many markers that announced to the country that those moral certainties we once held dear were now questioned.

The unshakeable trust in our government faded during the Vietnam War, then Watergate. Divorce became more common, chastity less common. These changes, all of which assaulted the institutions that our parents had supported or defended, ripped apart many American families, sometimes pitting the patriotic dads of the Greatest Generation against their warprotesting sons. Our family never splintered.

“Donna, I believe that acceptance and presence were our parent’s greatest gifts. I never felt any moral judgment, just love and support. Sometimes we would think mom wasn’t listening to us, but then a few days later, an old shoe box lined with wax paper and filled with homemade cookies would arrive in the mail.”

After dad retired from IBM in 1983, he became much more of an engaging personality. In the early 1990s, he lived with me, away from his wife, for four months to oversee the construction of a new home. One evening, I told him that mom had called earlier in the day.

“What did she want?”

“To come here to help me pick out colors and furnishings.”

“She can’t visit, that would ruin everything! You need to call her and tell her that she can’t come yet!”

I laughed, immediately understanding that sure, he wanted to build the house and help me out, but he also wanted a four-month “time-out” from what would turn out to be a sixty-three-year marriage.

My wife and I still live in the home that dad built. Like Donna, I treasure the small and simple possessions from our time with mom and dad. In the corner of my home-office, for example, is mom’s red plaid knitting case. I use dad’s old tool chest as a set of drawers. But my favorite is a chest he made for my daughter, Molly. Inside the chest, you see, are albums of old black and white photographs containing just part of the story of my mom and dad.

“You’re right, Donna, we were so blessed.”