Americana: The Road to Nicodemus 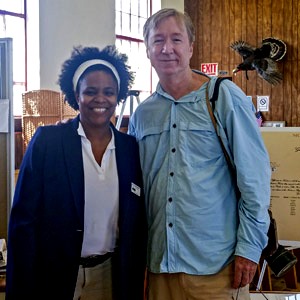 The Journey of Former Slaves from Kentucky to Kansas

“Rabbi,” Nicodemus says, “we know that you have come from God as a teacher, for no one can perform these signs that you perform unless God is with him.” In reply, Jesus tells Nicodemus that in order to enter the Kingdom of God, a person must be “born again.”
—John 3:2, 3.

The author (​standing, right) with Luecreasea Horne, recreational director of the Kansas City National Park service at the historic town of Nicodemus.​

“Well, you may be right. I’ve decided that we are going to Nicodemus.”

“Because the last time we drove from South Carolina to Colorado we saw nearly everything else there is to see in Kansas. We stopped in Topeka and visited the school that figured in the landmark Civil Rights case, Brown versus Board of Education. A few hours later, we toured the Dwight D. Eisenhower presidential library. On the other hand, if you remember, we did not see ‘the world’s largest prairie dog,’ so I suppose we could still take in that attraction.”

“Of course I remember. The man said that will be ten dollars apiece if you wish to see the world’s largest prairie dog. You said, ‘That’s too much, even though it sounds amazing.’ Why, it costs a lot of money to maintain this place, the man replied. You said, ‘I’m sure it does, but I am not paying twenty dollars to see the world’s largest prairie dog.’ Then I offered five dollars but he said, ‘No, I can’t do that,’ so we left. I was sure he’d say ‘Wait, I’ll take the five dollars,’ before we left, but he didn’t. But you haven’t answered my question: Why Nicodemus?”

“Look around for a second. What do you see?”

“Flat land, no trees, and nothing but white people. It’s been that way since we left Kansas City and that was four hours ago.”

“Exactly. So imagine how hundreds of blacks from Kentucky felt when they arrived here in the late 1870s. They stepped off the train expecting to see Nicodemus, the ‘Promised Land,’ but instead, they learned that the town was fifty miles away and that to get there they’d have to walk.”

How desperate would you have to be to move your family from Kentucky to distant Kansas?

Maybe as desperate as the conditions blacks found themselves in, in the American South, when in 1877, the federal government announced the end of Reconstruction. In the absence of Northern oversight, the South slowly reverted to its old racist ways, this time by creating two separate societies, one for blacks and one for whites. For blacks, the hopes of equal citizenship, as promised by the Emancipation Proclamation, seemed an illusion.

One of the biggest “Go West” promoters of the era was Benjamin “Pap” Singleton, a former slave. He convinced many blacks in the South that life would be much better in Kansas. ‘Why, thanks to the Homestead Act of 1862, the United States government will give you free land for moving to the underdeveloped Western states.’

Those who followed his advice called themselves “Exodusters,” a made-up word with two different references. In the Bible, the book of Exodus describes how Moses led the Israelites out of Egyptian slavery and toward the Lord’s “Promised Land.” “Dusters” was a reference to the flat, dry farming lands of America’s Great Plains. As Bertha Calloway summarizes,

Kansas seemed like an ideal place for people who were disillusioned with the black codes that had been passed in the South, the meanness of the Ku Klux Klan, the meanness of the sharecroppers who really weren't sharing the way they had agreed, and these are the people who paid five dollars, five bucks to Pap Singleton to come up the river to a new life in Kansas.

But it was a white land developer, W. R. Hill, and not Pap Singleton who convinced black families to move from Kentucky to Nicodemus. Hill, along with five black men, formed the Nicodemus Town Company. The earliest settlers arrived in June 1877. With little time and few resources to build permanent homes, they quickly built temporary homes in dugouts along the prairie. Later in the year, the first black child was born in Graham County to a Mr. and Mrs. Henry Williams.

I’d like to write, “The miles passed quickly as Molly and I tooled along the back roads of Kansas,” but it would be more accurate to say, “We thought we’d never get there.” Harsh summers and miserable winters in the treeless windswept plains caused many immigrants to abandon the free land and return to their homes in Sweden, Germany, or Czechoslovakia.

“We are now in Nicodemus,” I told dozing Molly as I parked the car. I had to announce it. Not much is left of the town once populated by hundreds and hundreds of black residents.

“Really, Dad, I know we’ve gone to some offbeat places, but…”

“I understand. I didn’t have the nerve to tell you back on Interstate 70 that only five original buildings remain from the early days and that only a handful of people still live here.”

“Oh, this is rich! Just like Mr. Hill, you give me a sales pitch on why we should travel to Nicodemus! You tell me, ‘Molly, Nicodemus is on the National Register of Historic Landmarks because it is the only remaining intact black settlement of the era west of the Mississippi River,’ which sort of got my interest, but you forgot to add the part, ‘It’s nearly abandoned and there is very little to see.’”

“You sound like Willina Hickman. Do you want to know what she thought when she arrived here in 1878?”

I looked with all the eyes I had. I said, "Where is Nicodemus? I don't see it." My husband pointed out various smokes coming out of the ground and said, "That is Nicodemus." The families lived in dugouts.... The scenery was not at all inviting, and I began to cry.

Despite the hardships these early settlers persevered.

By 1886, Nicodemus boasted fifteen stone buildings, fourteen farm buildings, seven sod structures, two churches, two hotels, one newspaper, one schoolroom, a land company, one bank, one society hall, and 150 permanent residents. The town’s future seemed bright, but when the promised railway never materialized, its fate was sealed. Later events in American history, including the Great Depression, the “Dust Bowl” storms that swept through the Great Plains during the 1930s, and farm automation decimated many small Western towns, including Nicodemus.

Not expecting to learn much beyond what we had read online, Molly and I stepped into the Visitor’s Center.

“Hi, my name is Luecreasea Horne, and I work for the National Park Service. If you have a few minutes, you might enjoy watching our brief videotape on Nicodemus. Have plenty of displays to look at, too. May I answer any questions?”

“It is too bad you are here today, and not in a few weeks. Every July we have a reunion of those folks, like me, who are the descendants of the original settlers. Hundreds of black people from all over the country will attend, some from as far away as California. We think of it as one large family reunion, which given that so few families settled here, is not far from the truth! The odds are good that if you forget a person’s name you can safely say, ‘Hi, cousin!’

“If you were to ask any of us, we would tell you the same thing: We are connected to this land. Even when I lived in Kansas City I longed to be back here. When my boyfriend proposed to me, I told him I would marry him if we moved to Nicodemus.”

Molly and I laughed, and after a few more minutes of conversation, took our leave.

After spending a couple of days in Colorado, I returned home to South Carolina, this time by jet. I stared out the window, unable to see the small towns that dot the flat lands of Kansas. But I stared anyway, lost in the wonderment of how a group of former slaves from Kentucky made it all the way to Kansas, and how their yearnings for fairness, equality, and a chance for a better life, are as meaningful today as they were on the 1878 day when they boarded that train for the Promised Land.