Americana: The Slingshot Kid! The Adulteress! The Rich Ruler! The Good Samaritan! 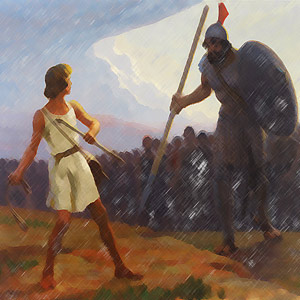 When I asked the collection of sleepy-eyed high school-aged kids who were gathered in my Sunday school class to tell me about the great Biblical hero, David, all they could tell me was that this plucky shepherd boy killed the giant Goliath. Satisfied by their answer, they relaxed, or tried to, because as I told them, theirs was a horrible and incomplete answer. “If I could give each of you a grade, it would be an F."

I told them they should be thankful that the Lord sent me, and not some doting grandmother who would do them a great disservice by saying, “Why, that’s a very nice try, you sweet darlings,” when it really wasn’t.

The Lord’s message for me to teach the kids came to me via the Session, a Presbyterian tradition consisting of elected men and women called Elders who run the local church. It was their dubious idea that I become a member of their group with responsibilities for teaching our high school-aged kids. I laughed when they extended their invitation. “You don’t want me teaching your kids!” “Well, we do.” they replied.

As in Decembers past, I will share much Christian history and theology but mostly against the backdrop of famous biblical characters and stories that have escaped the pages of the Bible, and now have an honored, nearly non-secular place in American culture.

“In the beginning, God created heaven and earth… .” So begins the Bible. Over 2,000 years of stories that lead to the birth of Jesus Christ follow those words, the collection of which we Christians call the Old Testament. It is in these pages that we meet the iconic David.

The war was a standoff. The Philistine and the Israeli armies, each fearing catastrophe should they attack, remained stuck in defensive positions. Finally, each side agreed to send forth a single warrior to fight on behalf of their respective army. The Philistines selected a well-armored giant of a man, Goliath. At first, no one on the Israeli side volunteered to fight the imposing figure. Finally, a young shepherd, David, told the king that he could defeat Goliath, just as he had killed lions and bears that threatened his flock. The king agreed, and reluctantly sent forth this unarmored and seemingly ill-equipped person to fight for him, and the God of Israel. David approached Goliath, put a stone into his sling, and fired the projectile. The "bullet" hit the giant between the eyes and killed him.

Today, everyone on planet Earth believes this story is the perfect metaphor for the success of a plucky underdog against an apparently invincible opponent. “But is that true?” I asked the kids.

Think it through! Wouldn’t a lithe and agile shepherd run literal circles around a giant man weighed down by battle armor? Accustomed to killing lions and bears with his deadly accurate slingshot, David surely found Goliath, who was anticipating traditional hand-to-hand combat, a sitting duck! Hey! Goliath was the underdog!

Later in the Old Testament, we learn that the Lord loves this faithful shepherd, even when the now-King David commits adultery by seducing a married woman. But David eventually matures and the Lord blesses him with a son, Solomon, whose name today is nearly synonymous with being wise. In Christian theology, the ‘David story’ is critical, for Jesus is born of the ‘House of David’ and is thus one of the tenuous links connecting the Old Testament to the New Testament.

During my teaching years, several parents complained that I did not take the stories from the Old Testament seriously and as written. The latter charge is certainly true, for I do not believe that God created the world in exactly seven days or that the prophet Jonah lived for three days inside a big fish before being spit back, parts intact. But I do not dismiss these pages as worthless. I most certainly do not believe that God and Satan placed a bet with each other to test the faith of Job. But in this brilliant narrative, when faithful Job is punished for no reason and cries out, “Why me, Lord?”, we feel his anguish and wonder: Why do bad things happen to good people?

At the Holy Trinity Elementary school in Poughkeepsie, New York that I attended, the lectures on sin were many, even when the material, such as “Thou shalt not commit adultery,” outpaced our innocence. Now, yes, when I read the Bible, such as the story of the Adulteress, I can imagine the scene.

A group of Jewish religious leaders lead a terrified woman into the temple courtyard. She is an adulteress. The scheming men don’t care about the woman. It is the messianic Jesus the men wish to trap and condemn in a religious snare.

“The Law of Moses says that for such a crime she should be stoned to death,” they say to Jesus. “What do you say we should do?”

Jesus says nothing. Seemingly oblivious to their presence, he writes in the dirt.

The question is repeated.

Jesus continues to write. Finally, he stands and says, “Let he that is without sin cast the first stone.” He then returns to his writing. A few minutes later he arises and sees the woman, but no one else.

“Woman, where are the accusers? Hath no man condemned thee?”

“Neither do I condemn thee. Now go forth and sin no more.”

It was my first meeting with my new boss.

Thirty seconds into the meeting, he tells me that when our company is sold he wants to make millions of dollars. To achieve his goal, he needs his salespeople to be like predatory sharks. Are you a shark?

I laugh and say no.

My boss is too stunned to talk. It’s as if I had hit him in the face with a dead mullet, I told my kids.

The Rich Ruler asks Jesus, “What must I do to inherit eternal life?” Jesus tells him to obey the Law. “I have, my Lord.” Then Jesus says to him, “If you want to be perfect, go, sell what you have and give to the poor, and you will have treasure in heaven; and come, follow me.” But when the young man heard that saying, he went away sorrowful, for he had great possessions.

“So what do you think?” I asked my now-awake students.

“Way to go, Bill! Yes, we understand the parable.”

“Oh, good Lord, you understand nothing. I could speak my mind because I knew I could find another job. I gave up no possessions! How am I different than the rich man? How are you different? Don’t you all have computers, cars, and laptops?”

I doubt my lessons had any impact on the kids who graced the classroom. But I benefited, because as a teacher I was forced to push beyond the perfunctory nature of my religious upbringing. Mom, for example, preferred attending an early Mass so she could “get it over with.” Dad preferred the Saturday evening service because it allowed him to gulp down a pre-Mass scotch and water, the perfect antidote for tedious priests. But outside the church, my parents always lived their faith by, say, reaching out to strangers in need.

In the time of Jesus, the Jews reviled the Samaritans, and the feeling was mutual. In the Gospel of Luke, we read of a Jewish man well versed in the Law of Moses asking Jesus, “Teacher, what shall I do to inherit eternal life?”

“What is written in the Law?” Jesus replied. “How do you read it?”
He answered, “Love the Lord your God with all your heart and with all your soul...and, love your neighbor as yourself.”
“And who is my neighbor?” he asked Jesus.
“A man was going down from Jerusalem to Jericho, when he was attacked by robbers. They stripped him of his clothes, beat him and went away, leaving him half dead. A priest who happened to be going down the same road, saw the man, but passed by on the other side. So did a Levite…But a Samaritan, as he traveled, came where the man was; and when he saw him, he took pity on him. He went to him and bandaged his wounds, pouring on oil and wine. Then he put the man on his own donkey, brought him to an inn and took care of him. “Which of these three do you think was a neighbor to the man who fell into the hands of robbers?”
“The one who had mercy on him.”
Jesus told him, “Go and do likewise.”

From my home to yours, Merry Christmas!