Americana: The Surprising and Lasting Legacy of America's Early Vacations 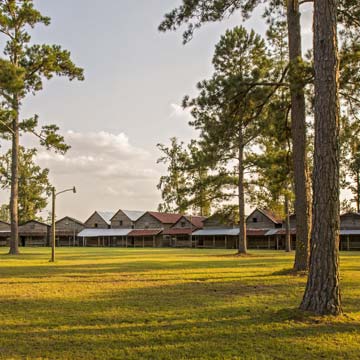 (Left) The Indian Field Methodist Campground in Dorchester County, South Carolina. Who would have thought such would be the places of vacations? (Photo: Bill Fitzpatrick)

I have this very Catholic need to confess the following sin.

In truth, I had no idea that when I photographed the crazy-looking Indian Fields religious campground and the scant remains of the Glenn Springs Historic District that I was in the middle of anything extraordinary. Both places are on the South Carolina National Register of Historic Landmarks, but so are over one thousand other places that I had photographed, including textile mills, plantation homes, and cemeteries.

When I initially visited these two places, I saw them for their given histories, and nothing more. But actually, as I learned later, these were our nation’s earliest vacation places, and what occurred in the campground and springs would have a profound impact on American history and culture.

Beginning in the early nineteenth century, thousands of the faithful made annual pilgrimages to similar campgrounds across the country. They came to listen to the word of God, not just from one minister but from many, each competing for attention with their fiery oratories.

In the campground’s earliest years, people camped in makeshift tents, but as the events morphed into tradition, more substantial wooden cabins were built. When I first walked the land and snapped my photographs, I wondered how any person of sound mind could spend multiple nights in these mosquito-infested hot boxes.

During that same era, and well into the twentieth century, it was thought that mineral waters could cure many ills. As a result, thousands of people from as far away as Europe traveled to remote Glenn Springs, hoping that its waters would heal the body. There were many similar such places across the country, including Saratoga Springs (New York), Warm Springs (Georgia), and Hot Springs (Arkansas).

Unlike the campground that I had photographed, save for an abandoned Presbyterian church and a crumbling general store, little remained of Glenn Spring’s once vibrant area. The springs that once offered hope have dried and the resort hotel that offered the privileged guests a pleasant stay has burned.

My “ah-ha” moment relative to these different landmarks arrived when I came across the book, Working at Play, written by University of Virginia historian Dr. Cindy A. Aron. The campgrounds and mineral springs of the first half of the nineteenth century, she writes, were the sites of our country’s “first vacations.”

As Aron notes, the word “vacation” was not even part of our nation’s common vocabulary in the first half of the nineteenth century!

Until the mid-1850s, if we used the word at all, we used it the way the English do, to describe the time when teachers and students vacate the school premises. Neither the people who visited the healing water nor the less-privileged folks who attended revivals would have called their time away from home “vacation.” The truth is, the prevailing American culture of the era—our famous Protestant work ethic—frowned on the very notion of “play” or “recreation.”

During that era, work was good and boisterous play bad. Recreation was something to be monitored. Idle hands were the tools of the devil. In 1851, a contributor to a religious publication, the New Englander, summed it best: “A recreation…is something which recruits, restores, and prepares the man for better service, and should be engaged in, always, with this end in view.” Amusements, on the other hand, left people “wasted,” “exhausted,” and with an “aching head.” Amusement was “pleasure for pleasure’s sake.” So scripture endorsed recreation but forbade amusement.

In theory, religious retreats and restorative waters were both agreeable events within the restrictive culture of the era.

There is theory and then there is reality.

Not so many years ago and in the wee hours of the morning, I heard a creak on the stairs. Another minute passes. I hear another creak. Mouse, meet cat. I busted the young man who was trying to sneak into a girl’s room. My wife and I, leaders of our church’s high school youth group, knew such a thing would happen during our church’s high school-aged religious retreat.

Sure, we can agree that most of those who made their way to the religious revivals wished to hear the ministers. We can also agree that many wished to mingle with folks they would never otherwise meet. But a significant number of attendees would take advantage of this fabulous opportunity among thousands of other people to drink, cavort, and engage in licentious activities with members of the opposite sex.

As the poor tended to their souls (or not!), the rich traveled great distances to heal their bodies. In the decades before railroads, travel could be challenging. If a town did not offer suitable public lodging, a letter of introduction to a leading family would likely lead to adequate comforts. Similar to the religious revivals, the mineral springs allowed men and women to mingle and mix, far outside prescribed norms.

When not in the waters, the activities of the day allowed women to flex their own athletic muscles and skills against men in activities such as boating, bowling, and billiards, all societal firsts.

During the last half of the nineteenth century, the notion of a vacation became an established part of American life. Due to the Industrial Revolution, increasing numbers of people had money. Railroads were built so even this middle class could afford to travel to exotic destinations such as Niagara Falls, the Hudson River Valley, and Washington, D.C. By the end of the nineteenth century, hotels and resorts were built to cater to the growing tourism market.

The simple gathering of people at those religious camps and mineral springs led our country to redefine work, play, and recreation. The sexes now worked together and played together. The notion that “idle hands were the tools of the devil” yielded to the notion of a proper balance between work and play.

In 1914 NCR (the National Cash Register Company) instituted an American first, the notion of a paid vacation.

The human machine, unlike its mechanical namesake, calls for a period of recuperation from the demands made upon it if its efficiency is to be increased.

This view eventually became part of the uneasy alliance that exists even today between work and vacation.

The conservative religious ministers of the era we have reviewed were none too pleased with the “sinful nature” of the early twentieth century pleasureseekers. Neither were some other people, America’s ultra-rich. It is in the latter’s dissatisfactions that we can find the greatest contribution of the historically undervalued vacation.

The ultra-rich, the Vanderbilts, Rockefellers, or Gettys, would never visit a religious camp, nor would you find them bathing in the waters of Glenn Springs, South Carolina. Their playgrounds were as private as they were decadent, no more so than the “cottages” they built in Newport, Rhode Island. These “cottages” were, in fact, grand European style mansions.

And the rich were none too pleased when they looked across their long nose of privilege to see an arriving trainload of Jews, Catholics, Africans, and middle-class Protestants, arriving for a week on the nearby beach.

Middle-class prosperity meant that Americans now had the means to take nice vacations. To be sure, old prejudices take time to dissipate, but the underappreciated vacation’s most lasting contribution to our American life may be in the way it helped break down class distinctions.

It is a pleasing proposition, is it not, to consider our country’s melting pot arriving at Niagara Falls, seeing each other warily, then clearly, all due to the brilliant heritage of the seemingly simple vacation.