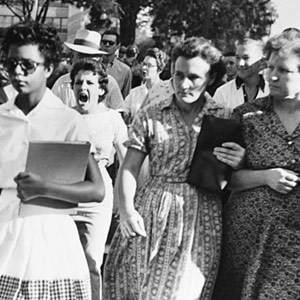 There’s certainly a hero in this photo. But is there a villain? This is a story of how 14-year-old Hazel Bryan was cast throughout the world as a racist due to this infamous photo—for parroting things she learned at home, and despite making amends with Elizabeth Eckford, the black schoolgirl in this photo. (Photo: Will Counts, The Arkansas Democrat.)

You’ve probably never heard of Elizabeth Eckford, so let me tell you about her. On the morning of September 4, 1957, her only goal was to attend her first day of high school, wearing the nice homemade dress she and her mom had picked out the night before. Little Rock’s downtown shops had nice clothes, too, but it wasn’t worth going to those stores if you were black. Properly dressed, she left her home for school.

Crowds lined the streets. Armed guards were everywhere. So were reporters. So were people who didn’t want to see the integration of their precious, all-white school.

“Lynch her. Lynch her!” the mobs shouted at the young girl. “No nigger bitch is going to get in our school!”

Looking for a comforting face, she turned to an old white woman, who promptly spat on her.

Hazel Bryan, one of those three girls, screamed, “Go home, nigger!” Hordes of photographs captured her contorted face and inner rage. In a matter of days, the disturbing events in Little Rock, Arkansas reached all corners of the world.

For quite a while, I have had the topic of “rednecks” on my Americana list, holding it in reserve for that month when I felt like offering lighter fare. But I can’t write fluff about The Beverly Hillbillies, ​The Dukes of Hazard, Honey Boo Boo, or of those comediennes who have made so many laugh with their “redneck” stories. My moment of epiphany arrived when I came across the standard opening patter of the popular “redneck humorist,” the late Lewis Grizzard.

Let's set the record straight. There is nothing amusing or glorious about the true nature of the Old South, no better exemplified than by the actions of Hazel Bryan on that fateful Little Rock morning.

Tighten your saris. Put an extra shot of cinnamon in that cup of chai. If you are hiding a flask from your husband, now is the time to break it out. This is the longer story of how Hazel Bryan came to shout, “Go home, nigger,” and we’re taking no prisoners.

God created all men equal, or so the Christian narrative goes, but no proof of could be found in 16th- 17th century London. Its streets and prisons were clogged with the filthy, the crippled, and the hopeless, and the privileged upper classes were tired of dealing with the “human waste.” More than a century before the British created their Australian penal colonies, they did the same in America, as they forcibly shipped as many as 60,000 destitute men, women, and children to the New World.

Think I am exaggerating about the exodus? The famous poet John Donne wrote of the New World as Britain’s spleen and liver, draining the “ill humours of the body…t​o breed good blood.”

To exploit the new land, the British set in place the same class structures of land and privilege of their London world. Rich and titled men owned the land, poor people could not. Colonies in Virginia, South Carolina, and Georgia soon became profitable, due mostly to the advantages of their ocean ports, and in part to strong British oversight.

North Carolina, on the other hand, did not have an advantageous port or any form of leadership. As Nancy Isenberg writes,

North Carolina, which came to be known as “Poor Carolina,” went in a very different direction from its sibling to the south. It failed to shore up its elite planter class…it became a swampy refuge for the poor and homeless. Populated by what many dismissed as “useless lubbers,” North Carolina forged a lasting legacy as what we might call the “first white trash colony.”

Cheap white labor is good, but if you are a profit-seeking plantation owner, free labor is better.

By 1700, the Carolina colony was half populated by slaves, a number that increased to 72 percent by 1740. Concerned by the widening imbalance, a series of laws were passed that for every six slaves an owner purchased, he had to acquire one servant. It was not a popular measure. Plantation owners knew that black women produced more babies than their white counterparts.

Let others rhapsodize and romanticize about those “good ole days.” They didn’t exist in the South, unless you were a plantation owner.

White people were either indentured servants, or trying to scratch out a living on land they couldn’t own.

Plantation owners used racial prejudices to maintain loose “alliances” with their white trash. At some future date a Civil War would be fought, and these sad sacks of people would be needed as soldiers to defend the “glorious ways” of the Old South. And when that day of reckoning arrived, and when the white trash deserted the Confederate army in huge numbers, we want to shout at the Southern general, Robert E. Lee, sir, why are you so surprised? Isenberg adds,

In Georgia, late in the war it had reached the point that deserters were threatening to kidnap slaves or worse, conspire with runaways. In 1865, the wives of Okefenokee renegades taunted authorities by claiming that their husbands would raise out of the swamp, armed and ready to steal as many slaves as they could round up, and then sell them to the Union navy.

Even when forward thinking presidents such as Thomas Jefferson and Franklin D. Roosevelt wished to help our poor white trash with initiatives ranging from land ownership to federal training and jobs programs, their plans never really garnered enough widespread support to be effectively implemented. People with no money rarely win in America, a brutal bit of Darwinism that came into vogue in the early 20th century. Many viewed our country’s economic system within this “survival of the fittest” paradigm, meaning the struggles of our white trash, such as Hazel Bryan, were just part of “the system.”

Hazel’s mother had married at age 14 to a man twice her age. Neither one of her parents had earned even a high school degree. Her father often worked in a traveling circus. The principal at Central High School suspected that her father was physically abusive toward his daughter.

The events of September 4 made international news. Elizabeth, one of the “Little Rock Nine” of fellow black students who braved those early days of integration, would become famous. Fame of a different sort would come to poor Hazel.

A few years after the event, the Times Literary Supplement acknowledged that it was the “ugly faces” of “rednecks, crackers, tar-heels, and other poor white trash” that would be forever remembered from Central High. One ​Southern reporter wrote, “Hell, look at them. They’re just poor white trash, mostly.”

In the early 1960s, Hazel picked up the Little Rock directory, and looked under “Eckford.” Then, without telling anyone of her actions, dialed the number. “I am that girl,” she told Elizabeth, and told her how sorry she was. In the passage of time, the pair would draw closer together, once appearing on Oprah together, another time for a forty-year reunion photograph. Then at other times, mistrust and suspicion would lead to separation. David Margolick, author of Elizabeth and Hazel: Two Women of Little Rock, writes​,

Still, Hazel never stopped thinking about the picture and making amends for it. She severed what had been her ironclad ties to an intolerant church. She taught mothering skills to unmarried black women, and took underprivileged black teenagers on field trips…she’d argue with her mother on racial topics, defending relatives who’d intermarried.
Secretly, Hazel always hoped some reporter would track her down and write about how she’d changed. But it didn’t happen on its own, and she did nothing to make it happen. Instead, again and again, there was the picture. Anniversary after anniversary, Martin Luther King Day after Martin Luther King Day…it just kept popping up. The world of race relations was changing, but to the world, she never did.

On September 4, 1957, two very young girls had their lives changed forever. One will be forever memorialized for the walk she completed, the other for a photograph that no longer applies. God bless two very remarkable women, uneasy partners in life and American history.