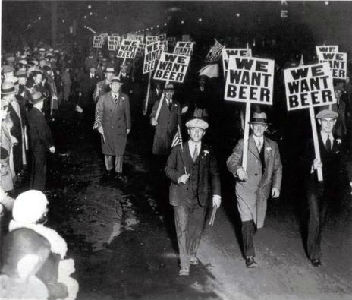 Of an era when America found out that it couldn’t control human vices or indulgences through legislation...

The Constitution is no place for experiments, noble or otherwise.
—Michael Lerner, Historian

According to a 2003 study by the Institute of Medicine, one in five teens binge drink. According to a 2011 survey of high school kids by the Center for Disease Control and Prevention, 39 percent drank some amount of alcohol, eight percent drove after drinking alcohol, and 24 percent rode with a driver who had been drinking alcohol. According to the FBI, nearly 1.5 million drivers were arrested in 2010 for driving under the influence of alcohol or narcotics.

There are days when some of us wish we could outlaw our love of alcohol.

But we can’t. We tried it once, and the “Noble Experiment” failed. This is the story of why we drink, and what happened when the righteous tried to take our drink away.

Alcohol is deeply rooted in American culture. We drink at weddings and at funerals. We drink to celebrate our victories and to drown our defeats. We drink when we play games and we drink when we watch games. Ever since Europeans “discovered” and then settled the New World, we’ve been swilling alcoholic beverages.

Those early settlers, the otherwise pious and priggish Pilgrims, were certainly concerned with satiating their thirst. The ship that carried these religious people to the New World in 1620, the Mayflower, was well stocked with alcohol.

Our Founding Fathers, men like Washington, Franklin, and Jefferson, hashed their plans and quenched their thirsts in community gathering places known as “taverns.”

Even the common man, burdened by hard work, unsafe water supplies, and disappointing marital lives, scraped together enough coins to afford shots of whiskey and pints of beer.

When the Revolutionary War ended in 1783, there were over 2500 registered distilleries in 13 states, one out of every four dollars Americans spent on expenses went to the purchase of alcohol, and an average American over 15 years old drank six gallons of absolute alcohol each year.

In the early 1800s, a few concerned citizens organized local “temperance societies,” but their laudable efforts to simply reduce consumption failed. Finally, at the latter stages of the 19th century a powerful coalition called the “Anti-Saloon League” formed. Women joined, as did industrialists such as Henry Ford, Andrew Carnegie, and John D. Rockefeller. The latter group had a vested interest because sober workers were needed to work in their factories, particularly in light of recently passed Worker’s Compensation laws. The conservatively religious joined as well. Wayne Wheeler, a man who had suffered a childhood injury due to the actions of a drunken farmhand, headed the Anti-Saloon League. According to his biographer, Justin Steuart, Wheeler was “recognized by friend and foe alike as the most masterful and powerful single individual in the United States.”

In 1919, when the government passed the 18th Amendment and outlawed the sale of alcohol, many naively thought it marked the end of American drinking.

The famous evangelist Billy Sunday opined,
Men will walk upright now, women will smile, and the children will laugh. Hell will be forever for rent.

Daniel C. Roper, Commissioner of the Internal Revenue Service said,
Broadly speaking…it will result in a nation that knows not alcohol.

Dr. Henry Lee Smith, the president of Washington & Lee University, thought that Americans were about to take
The longest and most effective step forward in the uplift of the human race ever taken by any civilized nation…

Americans did indeed take “the longest and most effective step forward,” but it was in the direction of their own kitchens, basements, or bathrooms, the places where forward-thinking families had stashed the necessary equipment to brew their own beer. Upwards of 700 million gallons of home-brewed beers were produced during the 1920s. If today, we bemoan the loss of quality “family time,” perhaps we should cast a nostalgic eye to this era when families worked together, as immortalized in this heartwarming 1920s jingle:
Mother’s in the kitchen
Washing out the jugs;
Sister’s in the pantry
Bottling in the suds;
Father’s in the cellar
Mixing up the hops;
Johnny’s on the front porch
Watching for the cops.

The Italians and Greeks, skilled in wine making, increased production levels, gave bottles away to friends, sold a few to strangers, and even trained eager apprentices in the time-honored art.

The impoverished Scotch-Irish made and sold homemade liquors, commonly called “hooch,” or “moonshine.”

Neighborhood stores appeared, each selling all of the vital products to produce homemade adult beverages. There was nothing technically illegal about their activities, because the equipment could be used to produce, uh, grape juice! Make sure you don’t let this grape juice ferment!

Even the government provided assistance! We can only suppose that the Department of Agriculture didn’t get the memo about the passage of the 18th Amendment, because even when Prohibition was the law of the land, they continued to mail out brochures informing people how to create alcohol from “apples, oats, bananas, pumpkins, and parsnips.”

Social adjustments had to be made for those wishing to drink with friends, so we invented the “cocktail party.” Lawmakers had never considered the possibility that Americans might actually be able to produce satisfying homemade beverages, so there was no law to prevent friends from slaking their thirsts in private homes.

Women, some of whom had spent decades flexing their political muscles in order obtain the right to vote—a wish fulfilled with the passage of the 19th Amendment in 1919—now felt equally empowered to “bend their elbows” with the same enthusiasm as men, and many did.

In spite of mounting evidence to the contrary, the Anti-Saloon League and Wayne Wheeler noted in December 1923, that, “There is little open and above-board drinking anywhere.”

We will take our leave of the amusing, chronicled so well by Eric Burns, in The Spirits of America, A Social History of Alcohol, and visit the darker side of Prohibition.

Injuries and deaths from the consumption of unsafe homemade alcohol increased. The cost of enforcing the laws escalated to unaffordable levels. In 1920, Congress allocated $2 million to fight the beverage wars. In 1921, the number rose to over $6 million. In 1930, it was $12 million and that wasn’t nearly enough. The Commissioner of Prohibition estimated that it would not be possible to dry up the United States for less than $300 million!

Bootleggers, gangs, and organized crime moved in to supply the product that the government outlawed—none more famous than the Chicago mobster, Al Capone.

According to Burns, during the long years of Prohibition, Capone might have been grossing as much as $100 million a year, just on beer. However, Capone is not so much remembered for the money he raked in as he is for the “St. Valentine’s Day Massacre.”

Furious at such brazenness, President Herbert Hoover told Secretary of the Treasury Andrew Mellon, "I want that man Capone in jail." The government then employed two different strategies to bring down the criminal mastermind. The first, to convict Capone of tax evasion, ultimately succeeded thanks to the determined work of lead agent Frank J. Wilson. But few in America know of Frank J. Wilson. Instead, we remember the exploits of Eliot Ness, a man connected to the second strategy of arresting Capone, also known as “Scarface,” on the basis of violating the 18th Amendment. Ness and his select group of agents, “The Untouchables,” so called because of their great integrity, aggressively went after Capone and his operations. Their heroic efforts ensured their place in American television (1959-1963, 1993-1994), and cinema (1987).

Finally, in 1933, the federal government repealed the 18th Amendment with the passage of the 21st Amendment. It is the first and only time in our nation’s history that an Amendment to the Constitution has been repealed.

It didn’t take long for the country to find the bottles and glassware to celebrate!